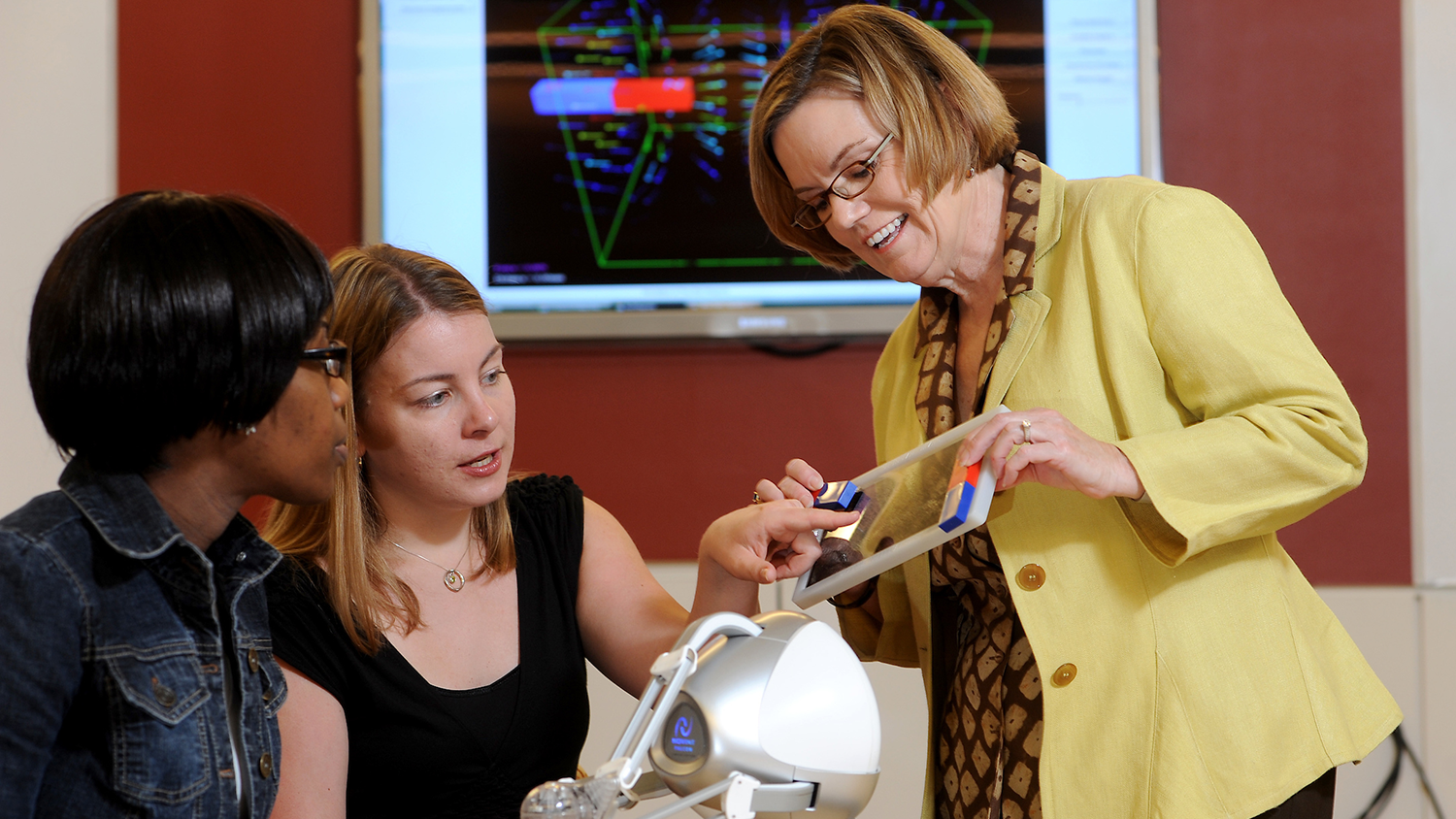 Photo, top: Professor Gail Jones shows College of Education students how to work with hands-on materials. As of fall 2017, women comprised approximately 37% of all faculty. Photo by Becky Kirkland.

NC State’s 2017 Faculty Salary Equity Study study showed that as of fall 2017, median salaries for underrepresented minority, Asian and female faculty for most ranks in most colleges were estimated to be between 95% and 105% of their reference groups (defined by college and rank).

A previous salary equity study conducted in 2001 revealed systemic pay inequities for women and underrepresented minorities. Much of NC State’s salary gaps were addressed that year and the salaries, averaged across the university, are now similar for all groups. The 2017 study shows a few instances where there are differences in median salaries across the demographic groups (underrepresented minority, Asian and female faculty) within a college and rank.

Note: The study examined the salaries of three faculty ranks – assistant, associate and full professors – for each of the 10 colleges at NC State. Each rank within each college is considered a group, totaling 30 groups in the study. Values indicate the number of groups with median salaries below 95% and above 105% of the reference group. The underrepresented minority (URM) category includes those who selected one more of Hispanic, Black or African American, American Indian or Native Hawaiian/Pacific Islander. Graph designed by John Zhu.

“I am pleased with the results of this year’s study and the work of the committee as we continue to determine how we are doing over time in regard to faculty compensation,” said Sheri Schwab, interim vice provost for institutional equity and diversity.

NC State’s Association of Women Faculty conducted annual faculty salary equity studies beginning in 1982, but major corrective action by the university did not happen until much later.

In 2001, NC State contracted Hagniere, Inc. to conduct a university-wide data analysis to look for systemic faculty salary differences related to gender and race. After examining data for 1,581 full-time tenured and tenure-track faculty, the findings from 2001 indicated an approximate difference of $1,000 annual salary between women faculty and comparable white males and an approximate difference of $2,000 between minority males and comparable white males.

The report from a study completed in 2006 states that the university allocated more than $700,000 in salaries and benefits to remedy the inequities reported in 2001. The findings from 2006, using the same methodology as the 2001 study, indicated a salary disparity averaging $491 for minority males but did not find salary inequity for women; in fact, it found that women on average made $466 more than men.

By 2012, there were no longer clear-cut patterns in salary disparities. A study that year found salary gaps of “varying magnitudes across colleges and groups of faculty.” Women’s mean salaries fell below the expected in some colleges but exceeded predicted levels in others. Averaged across the university, salaries of non-white and international faculty (both male and female) came close to predicted values; the findings from 2012 indicated differences between predicted and actual salaries of $200 less for minority males and $37 more for non-white and international women. Notably, the mean for the U.S. (citizen or permanent resident) white female faculty across NC State was $1,097 more than expected.

“The salary equity study is a good way for us to keep an eye on the important issue of equitable compensation, and it complements the efforts of our departments and colleges throughout NC State in identifying, recruiting and retaining talented faculty who bring a rich diversity of perspectives and experiences to our campus and to our students,” said Katharine Stewart, vice provost for faculty affairs and a member of the 2017 Faculty Salary Equity Study Committee.

The study committee has provided detailed findings to the dean of each college. Deans will determine how to address compensation and climate in their colleges with guidance from NC State’s provost.

While NC State’s internal salary disparities appear to be decreasing, it is important to continue to monitor salary equity along with issues of climate, retention, promotion and other areas beyond salary.

“Addressing the inequities back in 2001 did resolve most of the gaps we saw,” said Marcia Gumpertz, professor of statistics and a member of the 2017 Faculty Salary Equity Study Committee. “Across the university as a whole, the gaps are now small or nonexistent. However, there remain a few needs to be addressed in the colleges. It is a good thing to address regularly to make sure we stay on this path.”

The results of salary studies have shown an improvement in pay equity among faculty, but other pay issues, such as competing against salaries at comparable institutions, still challenge the university, as mentioned in the 2017 study.

The 2017 study also acknowledges that an examination of non-tenure-track faculty salaries would provide key information about NC State’s current faculty climate and pay equity, although the variables would be markedly different and require substantial effort to adequately assess.

Faculty salary equity studies conducted between 2001 and 2012 used similar methodologies to those used by Hagniere, Inc. for the 2001 study. Lois Hagniere, principal of Hagniere, Inc., provided a guide to the use of regression statistics for salary equity studies as an accompaniment to the 2001 report. The guide explains the use of multiple regression techniques to isolate the effects of related variables affecting the key variable of salary. For studies through 2012, independent variables included rank, tenure, administrative title and years of previous experience.

Adjustments in the 2012 survey included adding market salary as an explanatory variable for each department and rank and separating out some groups of faculty whose higher salaries might unfairly affect the results, such as named distinguished faculty and those who had served as deans or executive officers. The study also used different regression models for groups of colleges to apply the most appropriate treatment to each dataset.

For further information about faculty salary equity studies, the following articles may be useful:

Elizabeth Snively is a senior communications technologist in the Office for Institutional Equity and Diversity.

Why We Look at Faculty Salaries for Equity

NC State University strives to increase the retention and success of its students, faculty and staff from historically underrepresented groups to fulfill its mission for all to learn and work in an environment defined by the best practices in equity, diversity and inclusion.

As economic opportunities for women and underrepresented minorities have increased in the U.S. over the past century, landmark legislative changes have also arisen to ensure fairness. NC State abides by these laws.

The Pregnancy Discrimination Act of 1978 and the Lilly Ledbetter Fair Pay Act of 2009 also strengthened labor-related protections for women.