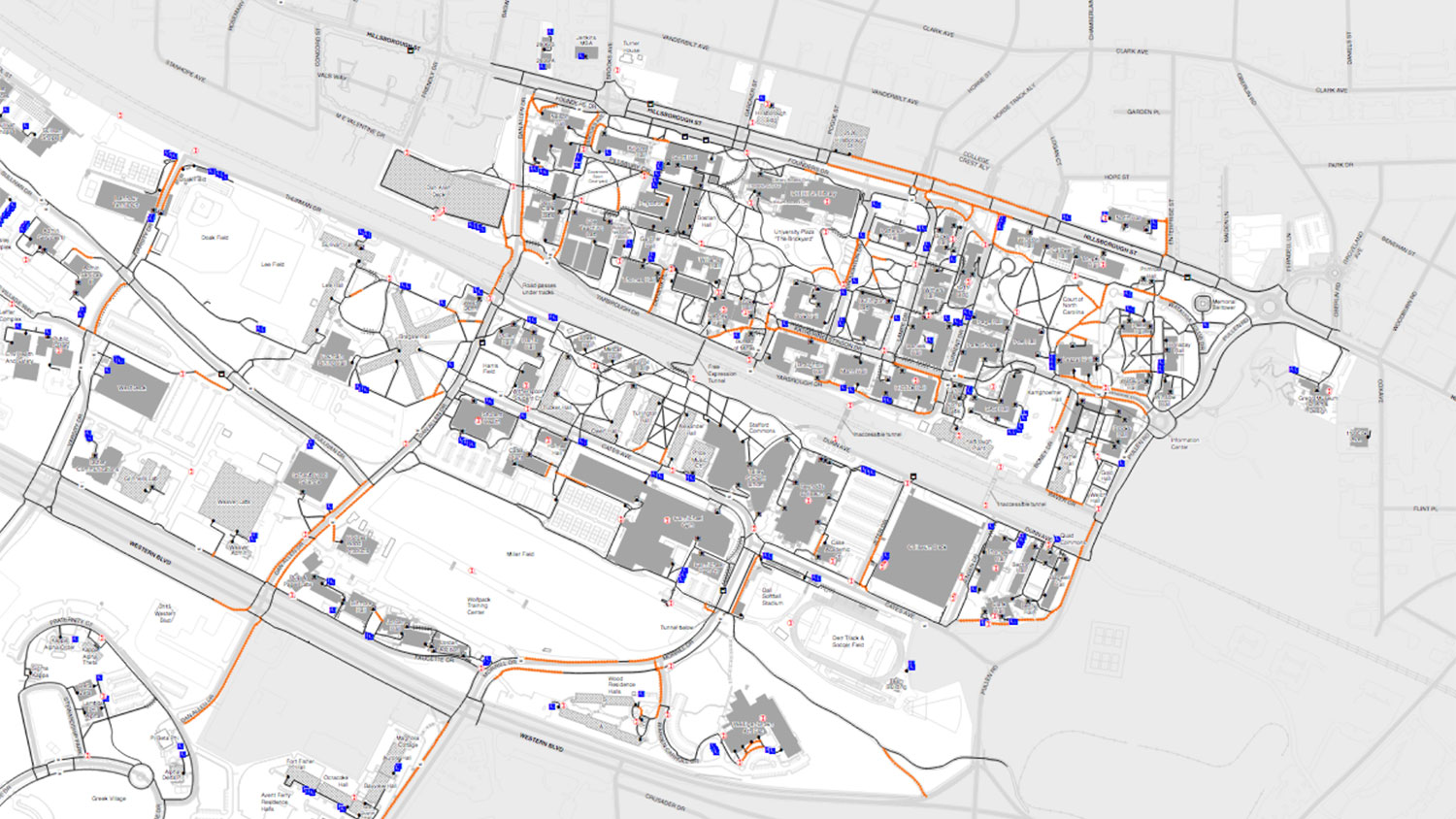 NC State community members now have access to a new and improved campus accessibility map that shows accessible routes throughout campus for persons with disabilities, including accessible parking and building entrances.

Access the map from any NC State website by clicking Resources on the NC State utility bar at the top of the screen and selecting Campus Map. From there, find the new accessibility map under Printable Maps. The map is also available on the GIS/Maps website. (GIS stands for geographic information system.)

As GIS project manager, Wynne serves in one role of many within the Office of the University Architect, an office whose responsibilities include planning for the physical campus in all its aspects, from architecture and landscape, which includes surveying, facilities, space management; and Wynne’s own area, Facilities Information Systems.

Wynne’s group, Enterprise GIS, led by GIS Manager/Developer Andy Belcher, has hosted and managed the enterprise GIS since the system first came online over four years ago. A surprising number of campus organizations use data from the system, including financial, administrative and business units who need information about the campus infrastructure, such as utilities. To be ready to serve these and future needs, the group convenes a steering committee and several technical working groups that have input from the Office of Information Technology, faculty members, NC State Libraries, the Center for Geospatial Analytics, Environmental Health and Safety, and Facilities staff.

Evolution of the Accessibility Map

A few previous versions of the campus accessibility map existed, including a major effort in the 1990s done in CAD (computer-aided design). Updated about every five years, the last printed accessibility map from that era dates to 2009.

As the prior technology became outdated and new construction projects on campus increased, the need for a better, shareable and easily updateable system became clear. With support and collaboration from Belcher and Thomas Skolnicki, university landscape architect, Wynne worked to convert the existing map and cartography data to the new system.

Even though the new map represents a big step forward, even more improvements are already underway. Soon, accessibility information will appear within the main campus map, with the ability to toggle it on and off. This additional functionality could be ready as soon as next fiscal year.

Planned updates include continued improvements for accessing the map on different devices, and more user interactivity.

Wynne invites feedback about the map via email to group-oua-gis@ncsu.edu, The Enterprise GIS group welcomes comments on any challenges of using the map or general feedback.