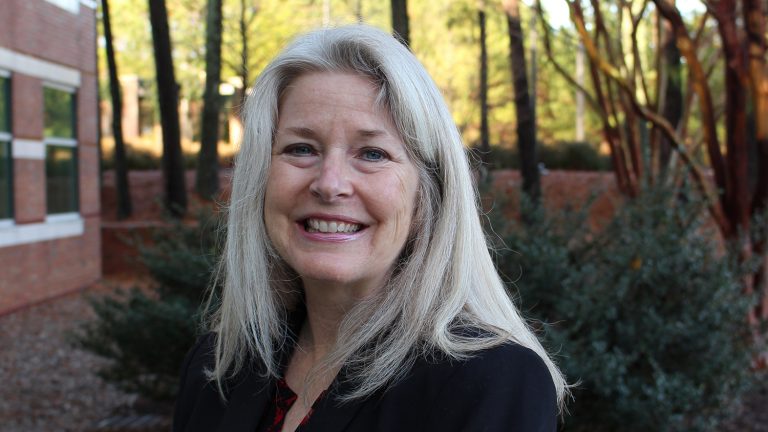 In the twentieth anniversary year of the Molly Hays Glander Fund, we’ve taken a look back at some of the people who have helped shape the programs NC State has in place today to support survivors of interpersonal violence.

Still a global problem, no place is immune to the impacts of interpersonal and sexual violence. Recognizing this fact, NC State leaders have worked diligently over the past two decades to make our campus a place where survivors have reliable resources to help them when they need them and to constantly expand our prevention efforts.

Earlier this semester, we interviewed Evelyn Reiman, co-founder of the Molly Hays Glander Fund. The fund supports the Women’s Center’s interpersonal violence programming and collaborative action centered on creating a culture of consent and a violence-free campus.

Its counterpart, the Survivor Fund, provides immediate funds for survivors. Funds can be used for emergency support as a survivor navigates medical, campus, law enforcement, counseling, financial, accommodations, reporting and other processes.

Rhonda Sutton was an early leader of the Women’s Center who contributed to the center’s current strengths in advocacy, programming and support for survivors.

A member of the Wolfpack since 1987, Rhonda Sutton, M.S. ‘93, Ph.D, ‘99 started as a reservations assistant in what was then called Talley Student Center. Although she had earned a business degree at Appalachian State University, she soon gravitated toward service-oriented-positions, landing in Student Affairs, volunteering at the Wake County Women’s Center, training as a peer counselor, and taking classes in counselor education.

Enrolling in the master’s program in counselor education was a natural next step for Sutton. As a graduate student, she interned in the Women’s Center and in Student Health Services, where they offered rape prevention education at the time. Her next move was to Student Development, where she got to know Jan Rogers, the first director of the Women’s Center from its founding in 1991. Sutton went on to do an internship in the Women’s Center while completing her master’s degree. When Rogers left, Sutton became interim director for a few months before being selected as director in 1993. While director, she started her Ph.D. in counselor education.

During Sutton’s five-year tenure as Women’s Center director, many notable achievements took place. She recalls the center’s first location in the bottom basement of Nelson Hall. While she grants that the university very graciously gave the space to the center, it wasn’t the most ideal location, as the center shared it with a group of faculty emeriti who also had space there.

Sutton navigated this awkward coexistence for a time but began lobbying for a move to Talley, where the center would have much more visibility and provide a more welcoming environment for survivors. The center has been centrally located in Talley Student Union ever since.

Sutton cites the influences and mentorship of both Jan Rogers and Evelyn Reiman as formative in the development of the center and for her own work as director.

She also cites the 1988 book, I Never Called it Rape by Robin Warshaw, a turning point in the development of on-campus resources for survivors nationwide, together with newly available statistics, as key events that raised people’s consciousness about the problem of rape on college campuses. These developments changed people’s perception of rape as a crime committed by strangers to one that includes the prevalence of acquaintance rape.

When Sutton became director, she noted the need for more education about sexual violence. As one of her early educational efforts toward this goal, she formed two groups: REAL (Rape Education and Active Leaders) Men and HEAR (Help, Education and Action on Rape) Women.

Donate to provide help and support to survivors.

Composed mainly of undergraduates, Sutton trained the groups on prevention, statistics and awareness. The groups also solidified NC State’s tradition of participating in the annual National Take Back the Night event, garnering 500 attendees in its second year (see related story). Sutton remembers the students’ dedication, saying, “They were both very good groups who worked hard. They worked with resident advisors, and many were RAs themselves. They took it upon themselves to reach out to their peers, doing interventions and active programming.”

She also started the rape and sexual violence prevention (RSVP) phone line in 1994, which is now known as the Sexual Assault Helpline (919.515.4444). She mentions Susan Grant of Student Housing, Pam Gerace of Student Legal Services, Larry Ellis of Public Safety, collaborators from NC State Police and the Chaplains Cooperative Ministry, as well as Interact of Wake County as instrumental partners in setting up the 24/7 response line with policies and procedures to ensure a clear and cohesive response, training volunteers and informing the campus.

Sutton believes the Women’s Center was ahead of the curve in the early 1990s. She remembers receiving calls from other institutions about how to start a women’s center. Contributing factors to its success included supportive staff and faculty, strong allies such as the Council on the Status of Women and supportive leadership. She praises the current efforts of the Women’s Center staff, led by Director Lisa LaBarbera-Mascote, who keep NC State ahead of the curve by growing the center through thoughtful, future-oriented initiatives that are responsive to changing campus needs.

Since then, Sutton has had a rich and varied career. She is back on campus as the director of leadership programs in the College of Agriculture and Life Sciences after stints as a clinical counselor at Holly Hill Mental Hospital; in NC State’s Office for Equal Opportunity (now the Office for Institutional Equity and Diversity); in private counseling practice working with survivors of trauma, rape and domestic violence; in the College of Veterinary Medicine as its first director of counseling services; as the first director of NC State’s Postdoc Office; and back to private practice as a counselor and consultant with Innersights Counseling.

She is still a supporter of the annual Sisterhood Dinner, and you can find her there enjoying the inspiring speakers. Sutton reflects on her time in the Women’s Center as important to her lifelong work.

“I realized the importance as well as the privilege of being an advocate when I was serving as the director of the Women’s Center; it’s there where I found my calling in terms of what I can give back to the world, and knowing that I could help people who had suffered trauma — being an advocate for them, a voice for them, a support for them — it really helped me understand the importance of that work in all of my different opportunities since then.”

Although realistic, Sutton hopes that one day there won’t be a need for centers because everyone will naturally advocate, support and give back so that we all treat people as they deserve to be treated. She concludes, “Until our world is fair and equitable, — which I would love to see, but I don’t know if I will see it in my lifetime — the Women’s Center will remain an important entity on campus.”

** If you or someone you know is experiencing relationship violence, sexual violence or stalking and are in need of advocacy services, the Women’s Center has trained advocates available to offer crisis intervention, emotional support, resources and referrals. Please contact us on the 24/7 Sexual Assault Helpline at 919.515.4444 or via ncsuadvocate@ncsu.edu to be connected with an advocate. For more information, please see go.ncsu.edu/supportsurvivors. **