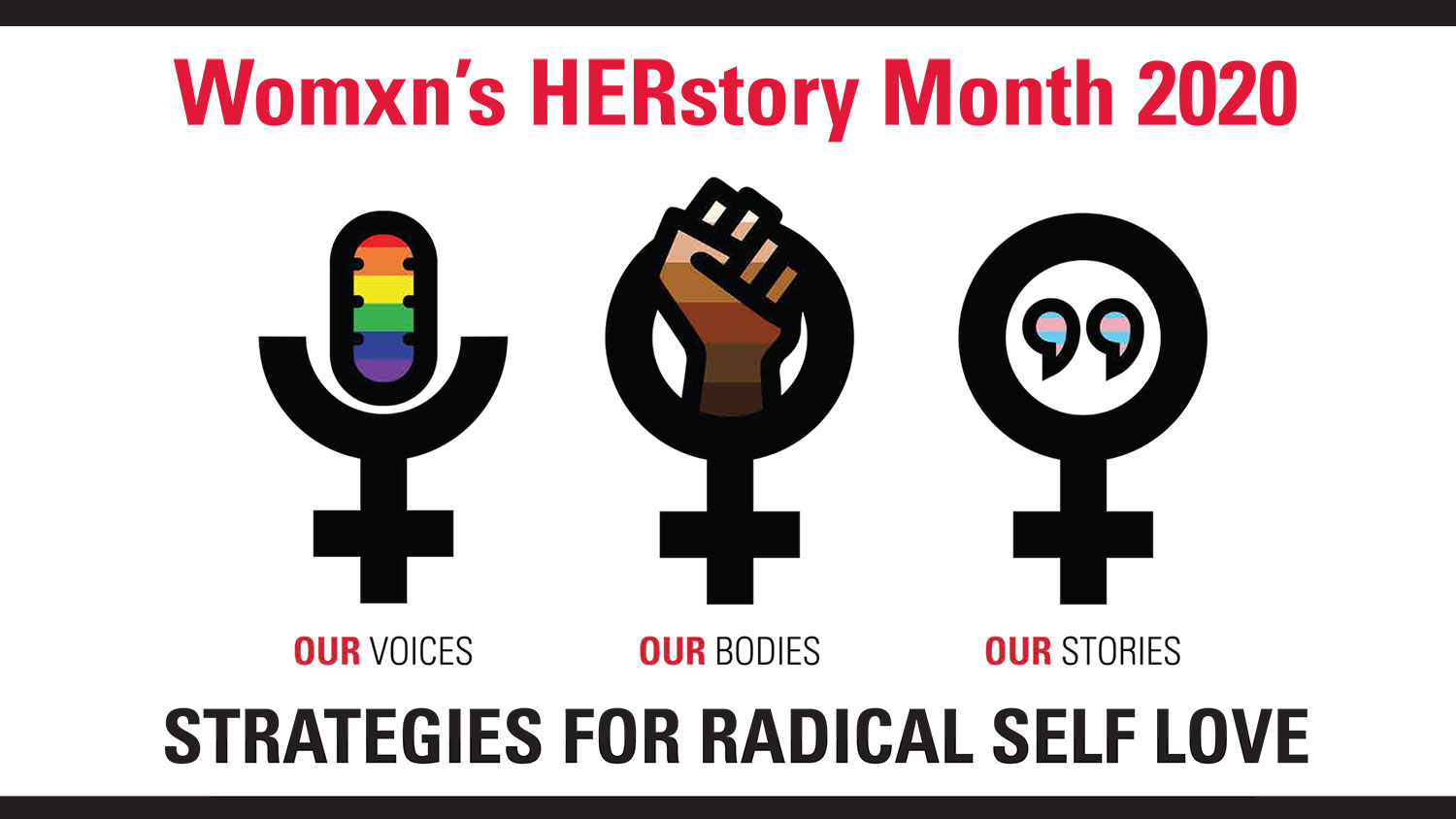 Join the Women’s Center in a celebration of Womxn’s Herstory Month with activities throughout March on the theme of “Our Voices, Our Bodies, Our Stories: Strategies for Radical Self-Love.”

The Women’s Center will engage the campus community in dialogue centered on the practice of “radical self-love,” as featured in the work of Sonya Renee Taylor, who kicked off the month in her keynote address on Feb. 26, 2020. (See Sonya Renee Taylor Promotes Radical Self-Love.)

This year, programs align with the following four categories that focus on critically examining sources of knowledge and information, relearning how we view ourselves and others, practicing self-love, getting to know ourselves and our bodies and seeing and acting in radical self-love within our communities, all while building a community ethic of care and compassion.

Why Do We Spell Womxn with an ‘X’?

In 2017, Women’s March organizers in Seattle chose to use the word ‘womxn’ to make sure everyone, including nonbinary people, felt included in the event. The New York Times reported that organizer Ebony Miranda understood the word to mean “women and those affected by misogyny, or women-related issues.”

Los Angeles artist Sarah Faith Gottesdiener then used the word in her t-shirt designs after studying variations of the words “woman” and “women” used in decades past, which included the Old English “wimmin” in the early 1900s and then “womyn” (and occasionally “wombyn”) in the 1970s.

Merriam-Webster added “womyn” to its dictionary in 2002, but currently “womxn” is gaining momentum as a preferred alternative to the traditional word “woman,” which to some represents a modification of the word “man,” perhaps implying an existence based on, or secondary to, that of men.

“Womxn” resembles the increasingly popular gender-neutral term “Latinx,” which also uses the letter ‘x’ to replace gender-specific words “Latino” and “Latina.” The usage not only removes a reference to gender, but opens the terms for use by and for nonbinary people.

While using inclusive spellings and language can require adjustments and explanations, many consider it a small price to pay for equality and inclusion as we advance toward more inclusiveness of the lived experiences of everyone in society.