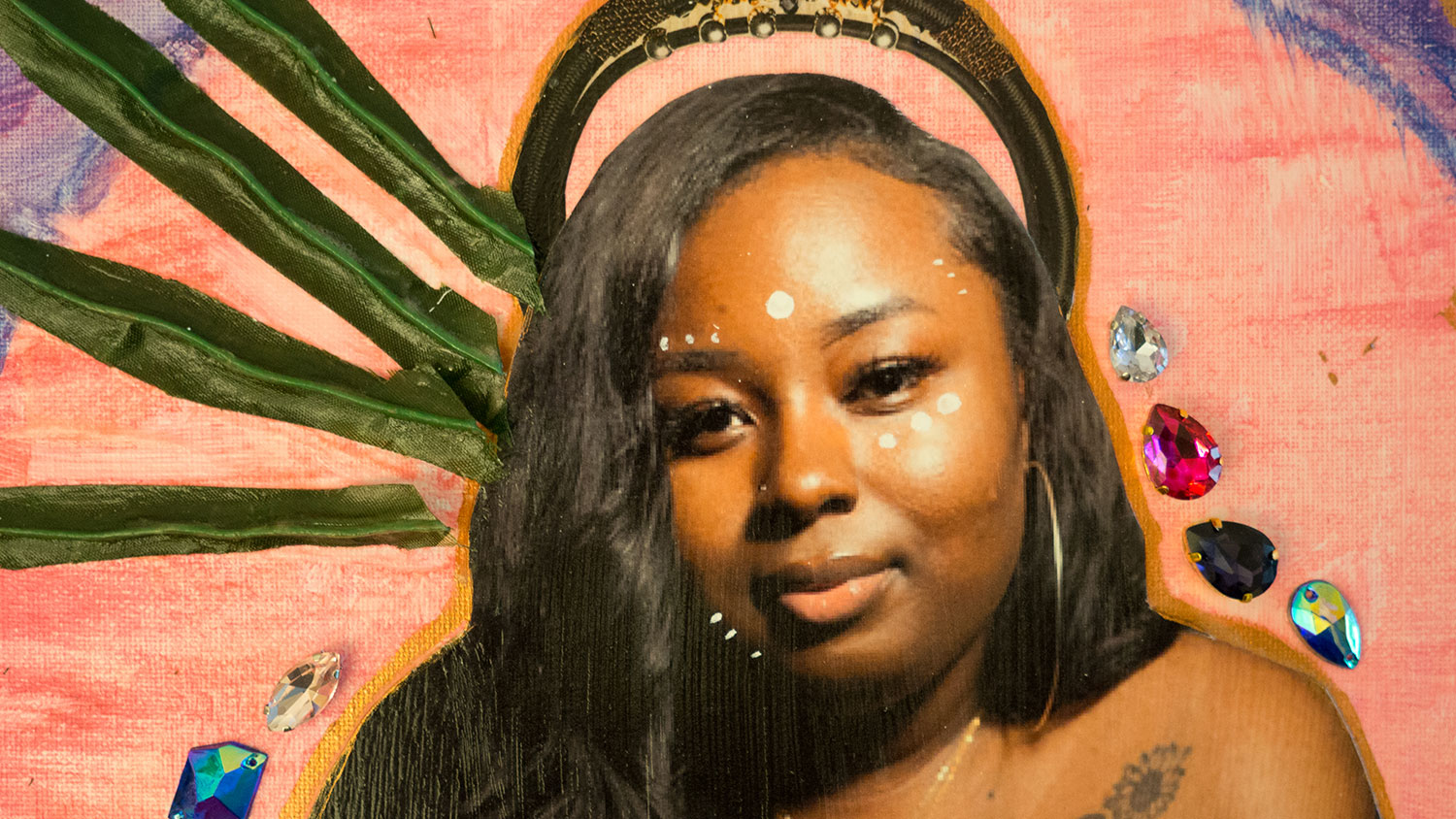 This year, the opening fell on the birthday of poet, essayist and Black feminist icon Audre Lorde, who serves as source of inspiration and strength for Angela Gay, curator of the exhibit. Gay, who serves as assistant director of the Women’s Center, said, “This exhibit, like the others, is a visual love story as Black people assert their radical imagination to move towards a liberatory future for themselves and others.”

The exhibit opened with remarks from African American Cultural Center Program Coordinator John Robinson-Miller IV, who introduced the community practices of the center and guided attendees through affirmations and libations. Following, Jerrica Jones, student programming intern in the Women’s Center, introduced a self-produced video detailing the historical and contemporary ways Black folx have acted as sites for resistance.

A highlight, among many, of the evening was the grounding song, Stand Up, sung by Rasheedah Fletcher, graduate student in counseling. Fletcher’s voice resounded throughout the room and roused emotions as the audience connected to the lyrics.

The official opening of the night was provided by Gay, who set the tone for an extraordinary evening. She welcomed both Black and non-Black folx into the exhibit, invoking celebratory futures for all those featured. She welcomed Chaniqua Simpson, graduate assistant in the Women’s Center, to share her call for the future.

Simpson leaned into vulnerability and read a soul-baring essay as she reflected historically on her existence as a Black queer woman and a claim for her own place in the future. She described her future and her struggles to create space for herself in it. Embodying the night’s theme of Afrofuturism, Simpson laid claim for the future for everyone by describing a place for the liberation of all.

African American Cultural Center Graduate Assistant Shantoneeka Zorn brought the programmatic portion of the evening to a close with a celebration for curator Angela Gay and every artist participant featured.

The sense of community present in the room was demonstrated by a child who was overjoyed with the signature clap of the Cultural Center and encouraged Zorn to initiate the clap once more. Jameco McKenie connected with this form of community as well, saying, ”I think about little children, Black children, being able to come into this space and see themselves represented and see a future for themselves that isn’t necessarily something that they interact with on a daily basis.”

The room was filled with positive energy, and when the doors finally opened to view the exhibit, it only intensified. The exhibit, inclusive of all Black folx across the diaspora, proves that, in the words of Angela Gay, “We exist.” A bright gallery shows AfroFuturistic multimedia collage portraits of NC State Black students, staff and faculty. Other walls showcase stunning black and white and colorful photos, captured by photographer Jacqueline Perry of the Office for Institutional Equity and Diversity’s communications team. The center of the room features an opportunity to look historically at how the past has shaped the present and the future of Blackness at NC State.

The exhibit is an experience that challenges people to think and engage with Blackness in ways they may not have before. Viewers commented on the beauty of the art and the people in them. Both Black and non-Black folx, through this exhibit, have a vehicle to imagine their future, a radical future where the magic in Blackness is free-flowing and we all can move towards liberation. During the opening reception, participants could leave their legacy with WolfTales. The exhibit will remain in the African American Cultural Center Art Gallery in Witherspoon Student Center until April 17, 2020. Groups or classes interested in a guided tour and/or workshop of the exhibit experience can complete the request form.

Womanism Teach-In and the History of Voguing

Womanism is a social change perspective rooted in the everyday experiences of Black womxn and other womxn of color and methods of problem solving in everyday spaces. Learn how to use womanism as a tool for liberation and struggle. Discuss how we can use our voice, our bodies and our stories through a womanist ethic of care to transform ourselves, our relationships and our institutions.

The Womanism Teach-in centers the history and contemporary experiences of transwomxn as we move towards liberatory action. The teach-in is open to NC State students, staff, faculty and community members interested in how to put womanism into action.

Join the Women’s Center and GLBT Center for a Womxn’s HERstory Month and Week of Action program on centering AfroFuturism as a site for liberation, particularly for our Black trans community. Speakers include community scholars, activists and artists who believe and embody the words of Fannie Lou Hamer, “Nobody’s free until everybody’s free.”

Amari Wilson is a second-year student in psychology and a volunteer in the Women’s Center.

The past year was challenging for all of us; we continue to persevere and we are currently continuing to work hard on many equity and inclusion efforts.