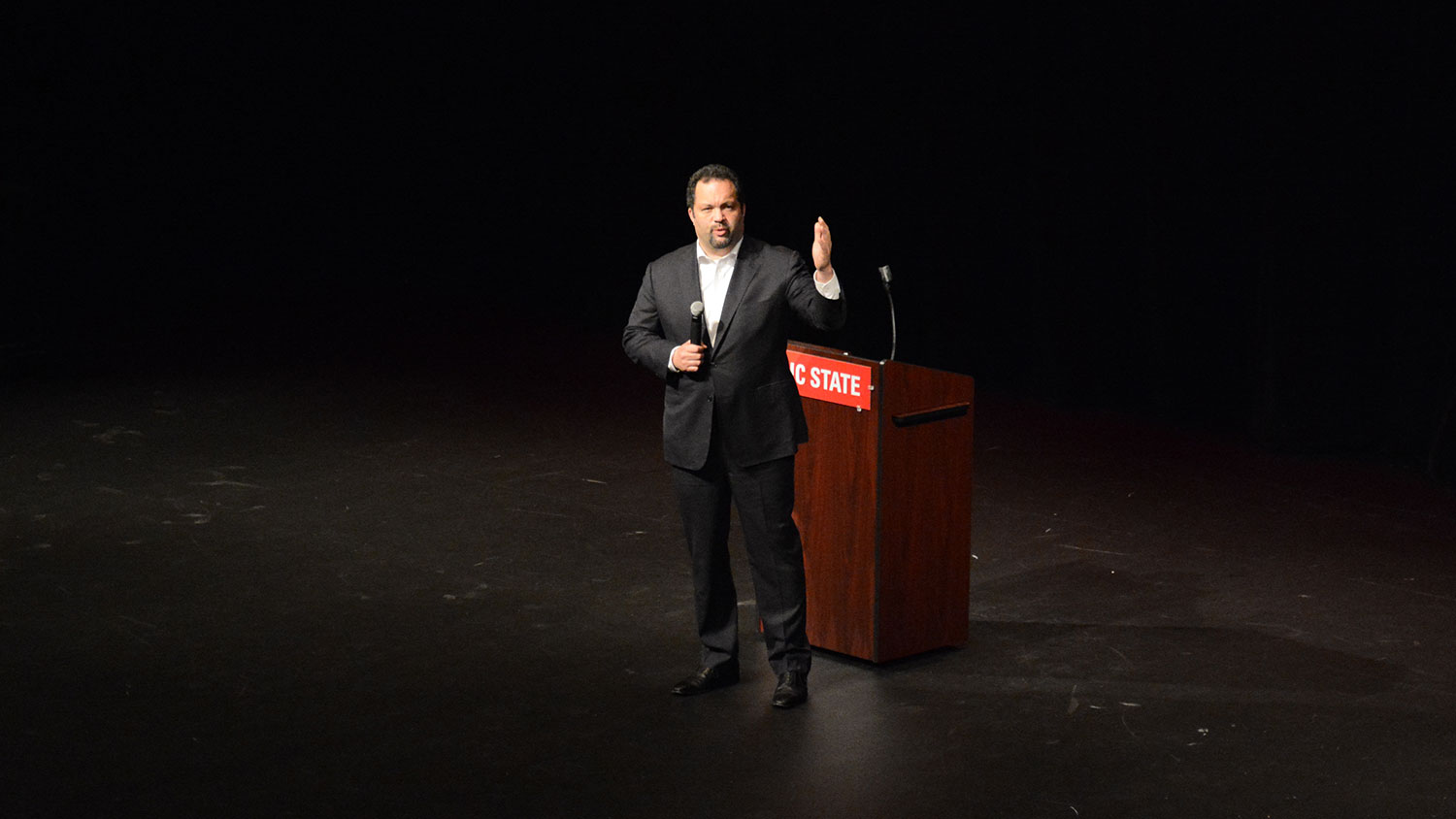 Prior to his Martin Luther King, Jr. Commemoration address to the campus on the afternoon of January 16, 2018 in NC State’s Stewart Theatre, civil rights leader and former NAACP President Benjamin Jealous shared some of his thoughts on various topics on the minds of some of NC State’s diversity practitioners. OIED communications intern Austin Butler recounts his responses to their questions.

On the importance of using stories to preserve our histories: As a biracial individual with a White father and Black mother, Jealous came from a family of oral traditions, with his maternal grandmother carrying over 200 years of history. She would insist to him, “Our people were always free,” which confused him. Later on, he learned that his DNA showed ancestry in Madagascar, which made what his grandmother said make more sense. It is important for young people to look deeper into their ancestors’ stories of survival to better explain where they come from.

On being accepted as a biracial activist: Noting that historically, people were determined to be Black if they had a single Black ancestor, Jealous clarified that there was formerly no such thing as being biracial. He grew up in Virginia, where the official definition was that being 1/32 Black would determine that a person was Black. In 1966, Jealous’ parents’ marriage was against the law. However, to him, being Black was a blessing. He joked that he had more fun, laughed and danced more, and the food was better on the Black side of his family.

On when he discovered that activism was his calling: As a fifth-generation member of the NAACP, Jealous always knew about activism, but it affected him personally when he had to defend his bi-gender sibling on the playground. As an adult, working for Jesse Jackson began his career after he overcame a severe stuttering problem and learned to give speeches.

On how he would reimagine Black men in the American media: Jealous stressed the importance of Black men countering negativity by telling their own truths. For every negative portrayal, there are many, many positive ones that need to be shown, such as men being successful fathers, employees, business owners and other positive examples. We need to portray Black men as assets to society. We need to break the tired sob stories – Black men really do have good role models out there.

On what he thinks MLK’s position on Black Lives Matter would be: Dr. King was at times at odds with Julian Bond and the Student Nonviolent Coordinating Committee (SNCC) because Bond wanted to control the speed of the movement. But King knew that young people defined the pace of the movement.

On how the NAACP can better engage with young people, and what he sees as the organization’s future: He advises people to invest in the old institutions to strengthen today’s newer ones. He made the analogy of cutting down old trees in a forest. When you do, the newer, smaller trees can burn from too much exposure to the sun. To revive an institution, he advises to keep in mind that it has its own intelligence, personality, pride and history. Often the person trying turn an institution around has the misconception that what people want to do is new – but new things are often met with resistance. Begin by making a list of the changes you want to make, learn the history of the institution very well, then circle the changes that are actually a revival or extension of an old tradition. It may become clear that the necessary changes are not actually new.

On being a venture capitalist when capitalism has historically left out Black people: As a professor at Princeton’s Woodrow Wilson School of Public and International Affairs, Jealous advocates a “both and all of the above” approach to economic success. Whether you must work several jobs or invest in small businesses in places such as West Baltimore, it is important to gain economic success to fix inequities.

On his platform for education in his current campaign for governor or Maryland: It is important to look at the concentration of resources; there is a priority problem, not a money problem. There needs to be more transparency, and also a focus on parenting. Black parents have evolved to be too controlling over the behavior of their very young children. A two-year-old must run under a table to explore and develop spatial visualization skills. There is also a gap between poor and rich children. Highly educated countries, such as Singapore, use American educational principles but implement them better than we do, with less of a gap between classes.

On how to avoid the daily discouragement of our divisive political climate: Turn off 24-hour news and pretend it’s 1978. Read the newspaper once a day or only watch the evening news. The 24-hour news is designed to be addictive and reinforces what we already believe.

On mass incarceration’s economic effect: Incarceration drives up student debt by decreasing the pool of people aged 18-35 who can attend universities. This drives up tuition, which drives up debt.

On how we can best embody King’s message: We need to prepare youth for entrepreneurship and social justice. They need to be trained in politics and business.

On the books that most influence him: He values books that are spiritual in nature, because leaders must be good at getting calm when everyone else is stressed out. His favorites are Ruby; Lebanese poet Khalil Gibran; The Alchemist; the Book of Matthew from the Bible and The Art of War. He noted that participating in camping, sailing, kayaking, backpacking and other outdoor activities that provide opportunity for spirituality is beneficial for everyone.

On how he recommends students prepare for a prosperous life: Jealous places importance on leadership, diversity, communication and teamwork. A liberal arts education uniquely provides this.

On his observations of current-day student activism: Activism and its styles have changed. Don’t discount what happens on social media. For example, Troy Davis, the death row prisoner who was unjustly executed, trended with #toomuchdoubt on social media, which did not save him but changed public opinion about the death penalty and led to its abolition in Maryland and Connecticut. Respect the styles and modes of today. Leaders need to write well and know how to operate in both politics and business. Also, look at protesting and ask, “What is the purpose?” Historically, it was to create a spectacle to get coverage. Social media activism achieves the same goal, shifting minds and impacting media. Training is needed to create a more effective voice with nonviolent tactics and action.