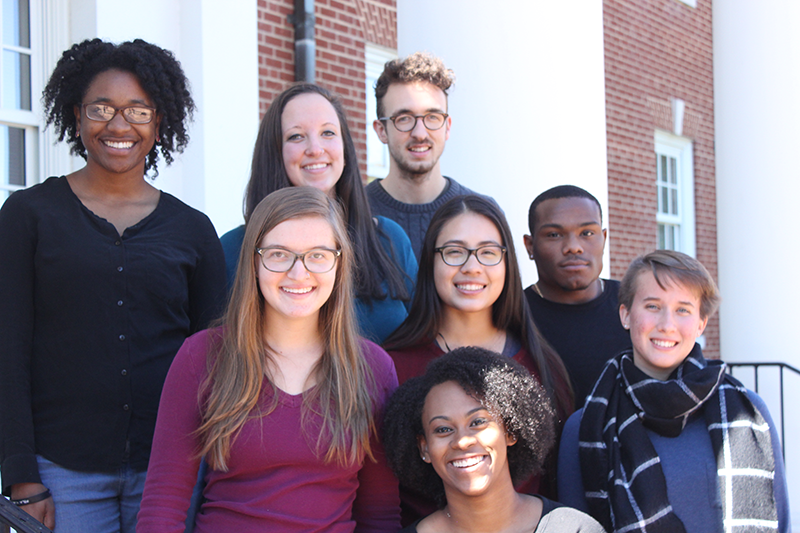 The term cultural competence first emerged over a decade ago, but cultural competency training is still not provided to all faculty, staff and students at most universities even though it is a crucial skillset for everyone. That is changing at NC State.

One of Vice Provost for Institutional Equity and Diversity Linda McCabe Smith’s first initiatives since taking the helm as NC State’s chief diversity officer is to develop and roll out cultural competency training on campus.

The first cultural competency training initiative set to launch is a pilot program for students developed by OIED utilizing the strengths of current student leaders. Directed by Garry Morgan, associate director of diversity programs, and titled DEPTH (Diversity Education for our Peers to Thrive), the program will provide students with the opportunities to engage in group dialogue and workshops focused on diversity and inclusion and learn to recognize social, cultural and historical inequities. Applicable to students in all majors, cultural competency skills lend themselves to both professional as well as civic engagement later on as alumni. Cultural competency among twenty-first-century graduates has become imperative as the job market globalizes and the national workforce continues to diversify.

The workshops and activities provided by the student DEPTH peer educators will cover a range of diversity topics, including gender identity, gender inequalities, race, ethnicity, color, nationality, religion, disabilities, sexual orientation, privilege, intercultural communication, microaggressions and intersectionality. The ultimate goal of the training is to spur action and positive change to the campus climate through increased awareness, knowledge and skills.

DEPTH peer educators, selected through their previous involvement in multicultural and/or social justice activities on campus, range from sophomores to seniors with a variety of majors and a wide range of diverse racial, sexual, religious and gender perspectives. The premise is to have members of the student body lead these initiatives because they represent, understand and relate best to their fellow students.

The initial DEPTH cohort of nine peer educators aims to create a set of programs that can be requested by student organizations as workshops, held as events or used to engage students in creative and highly visible ways. To prepare for creating these programs, DEPTH educators have been attending and leading existing diversity programs such as those held during NC State’s Diversity Education Week, reading articles, researching specific topics such as implicit bias, attending national conferences and workshops, participating in group activities and fully embarking on a thorough education program for themselves so they can be prepared to teach, lead and facilitate.

To achieve the greatest possible outcome, the educators serve on one of three teams to examine benchmarking, significance and impact. The benchmark team will assess diversity programs already on campus and at other colleges and universities for ideas on how to best deploy NC State’s program; the impact team will measure and assess the success of workshops and outcomes achieved on campus; and the significance team will look at content, participants and overall purpose.

What Exactly is Cultural Competence?

While NC State’s official definition of cultural competence will be finalized later this semester, three DEPTH peer educators gave us their own definitions and perspectives. Lauren Frey, a senior from Raleigh majoring in environmental sciences and women’s and gender studies, has been interested in forms of social oppression since before coming to NC State. Her interest led her to major in women’s and gender studies and to join The Movement, a group of peer educators organized by NC State’s Women’s Center that teaches students about interpersonal violence. Frey also participates in the Counseling Center’s Mental Health Ambassadors, NC State’s Sustainability Stewards and the Park Scholars’ Diversity Academy.

For Frey, working in cultural competence has allowed her to explore and learn about intersectionality, or the shared experiences between groups of people based on multiple identities. Frey defines cultural competence as “having an open mind to learn and understand others’ backgrounds to be able to interact with people without perpetuating harm, and to truly accept the people who are around us.” Jonique Lyles, a December 2016 NC State graduate in political science from Poolesville, Maryland, served as a member of the African American Cultural Center’s AYA Ambassadors student leadership group, NC State Student Government and has also been an active member of the Mu Omicron chapter of Delta Sigma Theta Sorority, Inc. Lyles, who is also currently featured in “Celebrating Scholarship” and “Lyles Explores Passion and Leadership,” founded SPEAK (Students Proactively Engaged toward Activism Knowledgeably). Her work in DEPTH furthers her belief that diversity peer education leads people to bond and work through issues together that she also experienced working with students as a counselor with Multicultural Student Affairs’ Symposium program.

Lyles points to a key benefit of cultural competence training as “being able to have dialogue that leads to a more inclusive culture on campus and a better community as a whole. Students will be able to take these skills to the workplace and handle situations beyond the university as they work with others in an increasingly diverse nation.” Victor Eduardo, a sophomore in philosophy from Cary, has been active on campus with the GLBT Center’s Volunteer, Internship and Practicum (VIP) program, TRIO Support Services, the Just Cuz Crew dance group and as an Exploratory Studies resident mentor. He arrived at DEPTH due to his background and experiences being Latino and gay, which he states were “revolutionary for his growth as a person.” In high school, he started a gay-straight alliance group and once at NC State, he participated in the GLBT Symposium and the Symposium for Multicultural Scholars.

Eduardo states, “Cultural competency is very necessary, and all groups benefit from it. Implementing cultural competency training at NC State helps the campus to improve as a result of our openness to a variety of viewpoints and thought.”

In the short-term, DEPTH plans to develop an effective, well-researched set of pilot workshops for students. In the long-term, the goal is to institutionalize peer-led cultural competency training so that all students are introduced to the term cultural competence, understand its importance and are exposed to a variety of avenues to build cultural competency as a student. Students often miss the opportunity to capitalize on the numerous strengths and benefits that our robustly diverse community at NC State offers; forging paths for students to build their comfort, confidence and ability to engage with peers who are different from themselves is key. After students participate in their first workshop, in some cases connecting where they feel most comfortable, they will be strongly encouraged to continue their journey toward gaining cultural competency by challenging their comfort zone and participating in additional workshops, events and follow-up options, such as a possible certificate program or networking opportunities. Associate Director Garry Morgan envisions a future in which the program’s team and offerings would expand to offer more than formal workshops, with dynamic events, more educator training and national involvement, bringing everyone “the knowledge, awareness and skills necessary to engage in and with different people in different socio-political and cultural contexts.”

Look for more information on the DEPTH program for students as well as the related cultural competency initiative for faculty and staff from the Office for Institutional Equity and Diversity in the coming months.