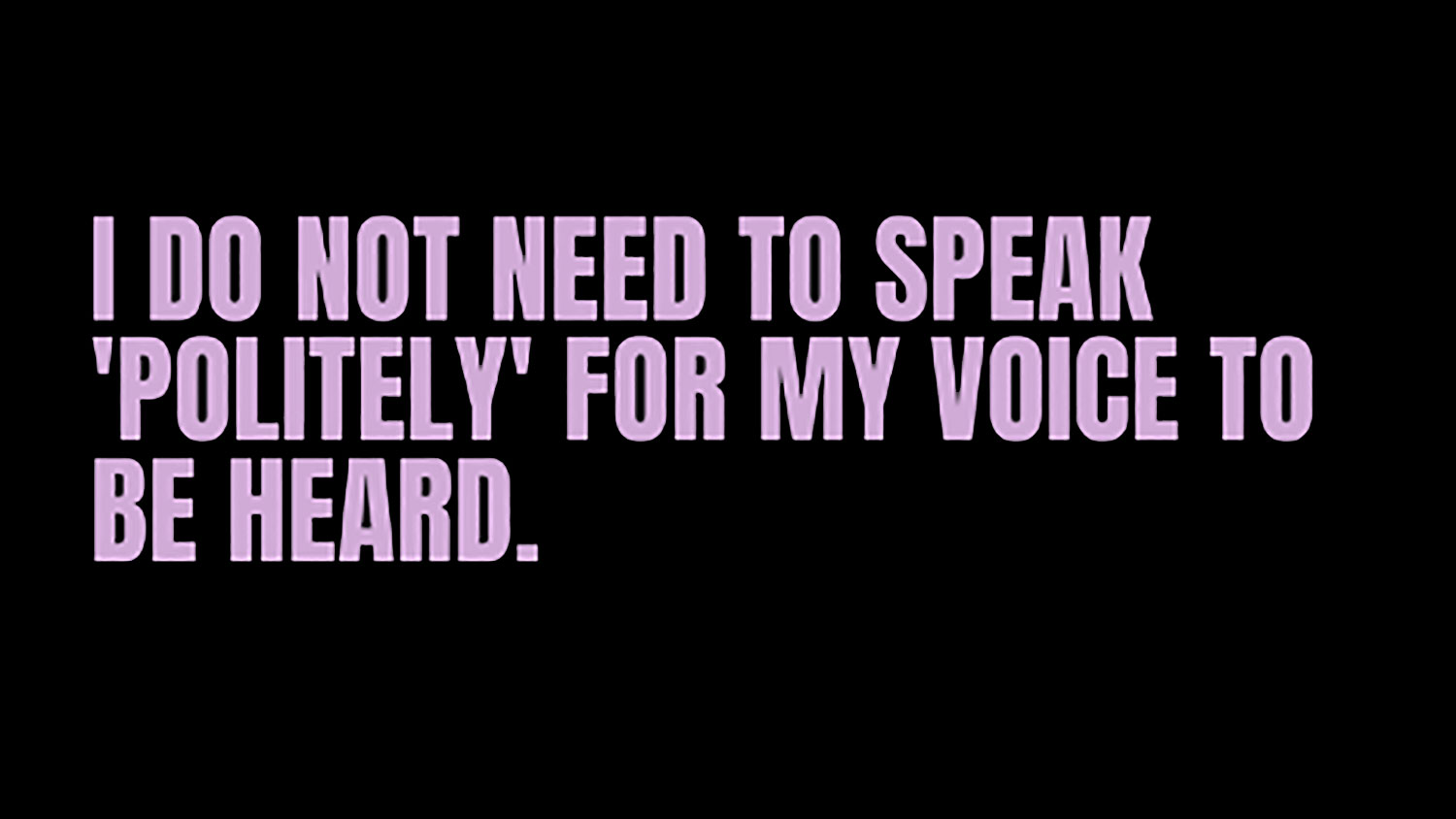 The following is a guest column from Dani Dalton, who recently collaborated on an interactive VR exhibit centering feminism.

Polite Too Long (PTL) is an art exhibit that explores the intersections of identity and gendered expectations of ‘politeness.’ Produced in honor of International Women’s Day, PTL captures voices from 24 people across six countries and is available in Spanish and English. The entire project, including concept, design, marketing and translations, was completed within a two-week timeframe for International Women’s Day on March 8, 2021.

The exhibit is a space to share and heal. It is also a revolutionary space to challenge double standards that the patriarchy enforces upon women and genderqueer individuals. With this exhibit, we are saying No más; we do not want to conform ourselves to please another, we should not need to speak ‘politely’ to be heard, and as Sonya Renee Taylor says, we should never have to apologize for our bodies.

The project was created by Meli Chaves (she/they), a Costa Rican feminist artist, and Dani Dalton  (she/they) an NC State undergraduate in women’s, gender, and sexuality studies. The project is voiced by  Clara Nascimento Politz (she/hers), a British/ Brazilian creative and past NC State international student.

Inspiration for the Exhibit

Kate Manne, a feminist philosopher, outlines how society has historically set different expectations for men and women within Down Girl: The Logic of Misogyny (2017). Simply put, women are expected to give, while men expect to receive. While discussing the text in my women and gender studies capstone class with Dr. Patsy Sibley, my classmates and I shared many similar personal experiences. It made me think, how many times are we told to smile or expected to conform to others’ expectations because of our gender? How often are we expected to do care work/emotional labor because of our gender that we do not want to? How often are we expected to give our time, bodies, energy or magic to meet others’ expectations? How many other stories are out there?

“…misogyny often involves distinguishing between “good” and “bad” women, by the lights of their conformity to patriarchal norms and values. So, at the highest level of generality, it’s not surprising that women who aspire to be “good” have social incentives to distance themselves from a woman deemed “bad”….”

By living and existing within the patriarchy, internalized misogyny and the notion of competition, or being “good” vs. “bad,” as Manne states, indicates that sometimes women can be the largest enforcers of patriarchal norms. It is this concept that inspires me to bring this topic into the forefront of discussion. If we are not aware of something, how are we supposed to talk about it or address it? Additionally, it prompted me to ask the audience to reflect on their own internalized misogyny.

Yes. The inside of the exhibit contains photos of 24 people and an additional educational room. Here the audience can learn more from famous feminist theorists, including Audre Lorde, Kimberle Crenshaw and Sonya Renee Taylor. The outside walls of the exhibit include affirmations titled, “I PLEDGE” that are intended to make the audience pledge that they will not feel guilty, silenced or ashamed of being themselves. Designing the guided tour helped convey the desired flow of activities we pictured.

Meli and I also recorded a conversation that is embedded in the educational room via QR code for those who wanted to learn more about the exhibit. We explain why we chose this topic and how we approached it coming from a Costa Rican feminist and United States feminist perspective.

Showcasing PTL in VR allows participants to be immersed in the exhibit as they experience it. This was crucial for the project design. I wanted people to feel the gravity of the project and have intimate experiences with the women and genderqueer people featured.

The exhibit showcases a series of interactive reflection questions throughout the ‘guided tour.’ VR allows participants to have an intimate and personal experience with PTL and to be a catalyst for conversations with the self and with others. I hope it is an educational space for the audience to grow and analyze the intersections of their own oppressions or how they move through the world.

Utilizing the platform “Artsteps” also made incorporating voiceovers very easy; we were thrilled to increase accessibility. If I were to make another exhibit similar to this, but host it in person, I would still create a VR version of it. Having a digital copy allows it to exist forever and extend outside of one geographical location. VR exhibits are the future.

I would like to thank all the fabulous people who helped recruit participants in this very short time. By sharing your experience, you are breaking the silence that the patriarchy expects from us. By breaking the silence, we are resisting. We are stronger together!

Thank you to my collaborative partner, Meli Chaves. Thank you to Clara Nascimento Politz for her amazing voiceovers. Thank you to Dr. Katherine Guinness at the University of Colorado for the design consultation. Thank you to all who have viewed and interacted with it so far. I’m so excited to start another project similar to this.

The exhibit takes about an hour to walk through. It may take some time to load since it complies a lot of code. Please be patient.

Dani Dalton (she/they) is an undergraduate in women’s, gender and sexuality studies, minoring in philosophy. During her sophomore year, she founded the Feminist Collective of NC State (FemCo) which now has 600+ followers on social media and 100+ dedicated general body members. FemCo strives to unite and support clubs that work toward gender equity and social justice on and off-campus. Recently she coded ncstatefemco.com to help share the mission of FemCo. She currently serves as co-chair of the campus climate committee with the Council on the Status of Women and works as a tutor for NC State ASPSA and as a special projects intern for Ascend Athletics, a nonprofit helping young Afghanistan women climb to their potential via mountaineering and leadership training. She is living and working in Central America as she finishes her undergraduate degree online.