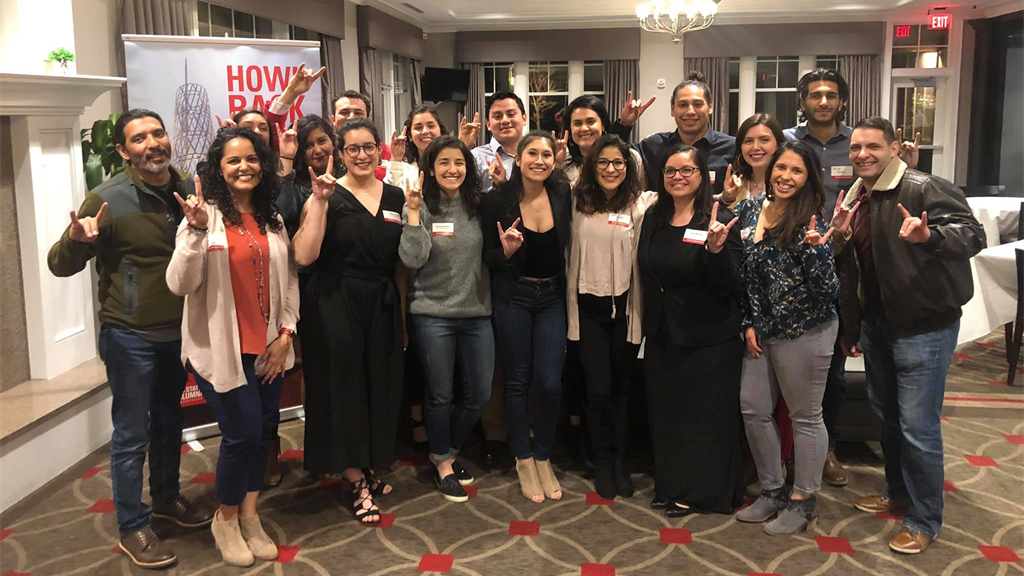 After a long night of driving from Florida to evacuate from Hurricane Irma, Lyndenise Berdecia ‘06 arrived in Charlotte, NC to stay with a family member. Berdecia immediately went to a nearby bistro. Not having time to wait two hours for a table, Berdecia sat at an open bar seat next to an older gentleman.

Her NC State hoodie called attention to her alma mater and the man said he, too, graduated from State, albeit many years ago. The two bonded over brunch and the conversation shifted to Berdecia’s efforts to start a Latinx Alumni Network at NC State, which were thus far futile. The man said he would make some calls and the two exchanged contact information.

Upon returning home, Berdecia discovered that the man was Jim King ‘62, former president of the Wolfpack Club Board of Directors, and namesake of the Close-King Indoor Practice Facility.

Berdecia and Duhon found that most Latinx alumni at NC State were not members of the Alumni Association because they didn’t feel a connection to the community on campus, and they wanted to change that. But community building was nothing new for the pair.

During their time as undergraduates, both Berdecia and Duhon were founding members of Mi Familia, a student organization whose mission “is to provide a social, cultural and political forum for students at NC State and members of the surrounding community interested in experiencing, learning and promoting the richness of the Latinx community and culture.” Berdecia was also a founding member of the Sube Ritmo (formerly La Raza de Mil Colores) Latin Dance Team at NC State. A passion for Latinx culture and community permeated the pair’s undergraduate experience and beyond and led to their interest in founding the alumni network.

The NC State Latinx Alumni Network connects Latinx alumni in an effort to help increase recruitment, retention and engagement of future students. The network currently has around 400 members but is steadily growing.

Since its founding, the Latinx Alumni Network has launched on Instagram, begun hosting LANTalks- their own version of TED Talks, raised over $12,000 on the recent Day of Giving and created the Latinx Alumni Network Scholarship for students who have demonstrated an interest in equality, diversity or social justice for the Latinx community by participating in community activities, social groups, student clubs or organizations that support this focus. The foundation for this scholarship was previously laid by Mi Familia.

The Latinx Alumni Network has already accomplished much since its founding but has even bigger plans for the future. The network is creating a mentorship program to connect alumni and students, looking for corporate sponsorships, hoping to raise $50,000 for the LAN scholarship to become an endowment and planning to continue creating a community.

“This is our community, let’s water it and watch it grow,” says Berdecia.