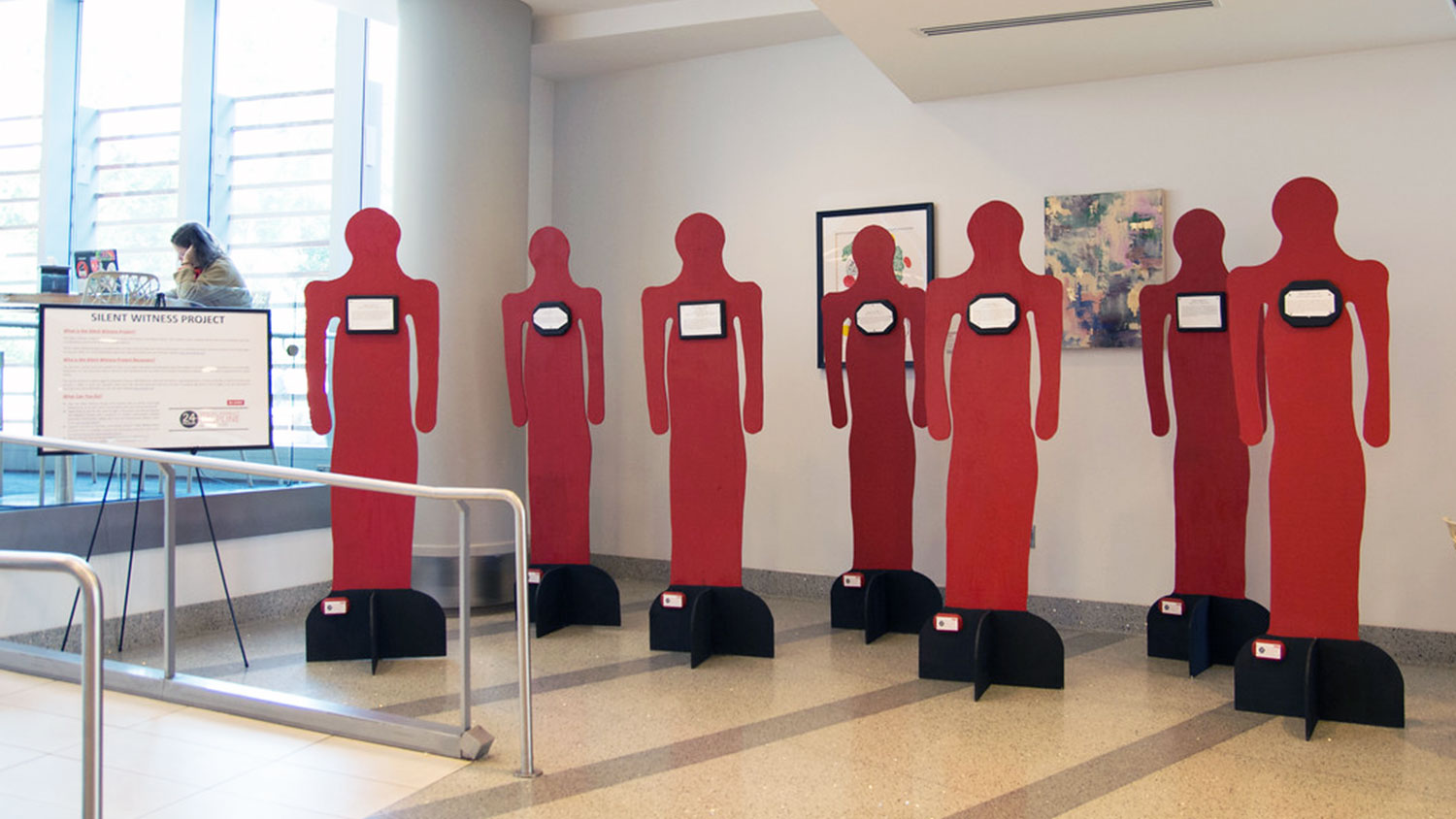 Red symbolizes many things. At this university, it is a part of our school colors. For some, it symbolizes love. In many cultures, red is auspicious — a symbol of good luck, fortune and new beginnings. This month, many of you might have noticed more red than usual in the lobby of Talley Student Union. You may have even stopped to inquire what these red statues are all about.

This NC State Women’s Center exhibit, known as The Silent Witness Project, is part of a national Domestic Violence Awareness Month campaign memorializing homicide victims. Each red statue carries a plaque with the story of an individual who was murdered as a result of domestic and dating violence. This year, all eight of the statues on display represent victims murdered in North Carolina in 2019. While the exhibit is startling, it’s important to note that if it were created to scale, we would need at least 44 life-size statues to represent each and every single person murdered in North Carolina at the hands of a current or former abuser since January 1, 2019. And that number continues to grow every week.

The goal of the project is to increase awareness and education in the NC State community about the impacts of domestic and dating violence and ways in which we can all take action to prevent and respond to interpersonal violence. Legal definitions vary by jurisdiction, but in the U.S., we generally understand domestic and dating violence as a pattern of abusive behavior in a relationship. This dynamic is then typically used to gain power and control over an intimate partner. While the vast majority of victims are women, domestic and dating violence can affect anyone regardless of gender identity, age, race, ethnicity, class, sexual orientation, religion, ability or any combination thereof.

In my experience, most people have a pretty narrow view of what domestic violence actually encompasses. I was raised around only a portion of what domestic violence holistically embodies, yet The Silent Witness Project has made me realize that even I — someone who has witnessed domestic violence — had a narrow view of what the words domestic violence actually embody. Researching and writing the stories for The Silent Witness Project was an eye-opening experience for me as I learned about people who have died at the hands of their partner in the name of distorted love. To me, partnerships are supposed to be a sacred unity and a safe space that has been built on respect. That respect should stand inside and outside of the relationship. To see that so many individuals, specifically in North Carolina, do not center this respect was a very surprising and emotional experience for me.

The Silent Witness Project will be on display until October 31, 2019 in the Talley Student Union Lobby. I encourage all of you to visit the exhibit, interact with its stories and encourage others to do so as well. Start a conversation with your friends and family. Learn how to identify the warning signs of domestic and dating violence by attending one of several workshops and discussions being held throughout Domestic Violence Awareness Month. Support survivors of domestic and dating violence by listening with empathy, believing them and connecting them to campus and community resources. Becoming educated is the first step in acting against domestic violence.

If you or someone you know is experiencing relationship violence, sexual violence or stalking and are in need of advocacy services, the Women’s Center has advocates available from 9:00 a.m. – 5:00 p.m., Monday – Friday in Talley Student Union, Suite 5210. After hours, please call the 24/7 Sexual Assault Helpline at 919.515.4444 to be connected with an advocate. For more information, please see go.ncsu.edu/supportsurvivors.

Sierra Kabir is a second-year student majoring in political science with a concentration in public policy and a programming intern in the Women’s Center.