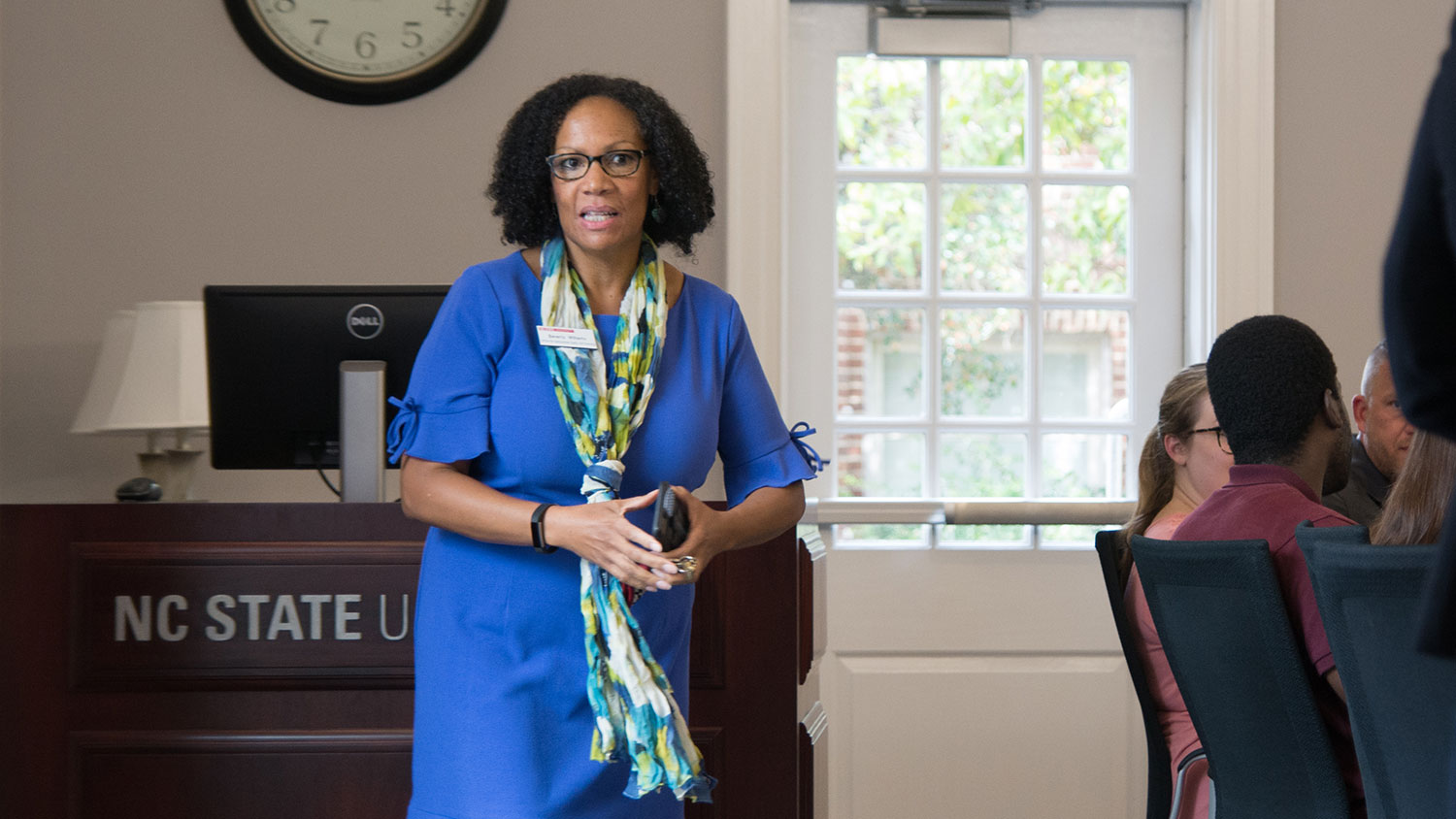 Beverly Jones Williams, the Office for Institutional Equity and Diversity’s director of outreach and education, serves in the role of guiding university-wide diversity, equity and inclusion training initiatives for NC State.

Part of that role is serving as the campus affiliate director of NC State’s National Coalition Building Institute (NCBI) team. Nearing the end of its second decade on campus — all under Williams’ leadership — NC State’s team has grown into a nationally-recognized example for other institutions.

So it’s not surprising that Williams periodically travels to facilitate NCBI workshops at other universities. Just back from one such trip to the University of Alabama at Tuscaloosa, we caught up with Williams to find out more.

Diversity Digest: You recently traveled to facilitate an NCBI workshop at the University of Alabama. Why are people still so interested in the NCBI diversity workshop model?

Beverly Jones Williams: Right now, there is a demand for the NCBI model of diversity education even though it has been around for thirty years. It’s about connecting and understanding people —  “every person and every issue counts” — and teaching how to treat people with respect but still move forward in a conversation, managing controversial issues and how to hold opposite viewpoints but still work together.

Diversity Digest: How did this opportunity come about?

Beverly Jones Williams: The opportunity came about through the Carolina Coalition, a group of schools in North and South Carolina who come together to combine resources and hold a Train-the-Trainer session annually to keep building their teams. There is always a natural evolution of team members on any campus, so it’s necessary to train people on a regular basis. This can be expensive, so pooling together with other schools can help. We currently have the Citadel, Wofford College, Presbyterian College, Western Carolina University and North Carolina Central University along with NC State as member schools in the NCBI Carolina Coalition.

Because of the work of the Carolina Coalition, and because of our strong team here at NC State that is seen as a national leader, I now advise team leaders at other campuses. I provide monthly check-ins on behalf of the national NCBI organization for the University of Iowa, the Medical College of Wisconsin, Salem College and UNC Hospitals in accordance with the national NCBI model.

Similarly, I helped the University of Alabama explore starting an NCBI team on their campus, invited by their chief diversity officer, Christine Taylor, to bring in people from their student senate, staff senate and athletics department to come to a one-day workshop and evaluate whether they want to bring NCBI to their campus. It’s the same workshop we offer here at NC State on a regular basis. Schools all over the U.S. are exploring different models to help work through diversity issues on their campuses, but NCBI is a tried-and-true model that we are fortunate to have.

Diversity Digest: How and when did NC State’s participation in NCBI at the national level start and how has it grown?

Beverly Jones Williams: In the NCBI model, all campus affiliates work with the national organization from the beginning. We’ve done the work and now regularly do a full range of workshops, including the full-length NCBI workshop. We also do the controversial issues workshop, the Building Bridges workshop and the principles workshop, Leading Diverse Communities, and have even created and teach an academic undergraduate course based on NCBI principles.

We’ve consistently held monthly meetings and reported on things we’re doing. From time to time, there have been incidents on campus where we’ve responded successfully using the NCBI crisis response model. Doing these things pushed us forward as a campus leader.

We work with other teams, and we see that some are strong, and some struggle to build skills among their team members, but we’ve always had a strong team. We’ve presented at the national campus conference for multiple years about how we’ve developed our team and built up a full range of workshop offerings.

Diversity Digest: What do you see as some of your goals as a leader and for the team in the near future?

Beverly Jones Williams: I personally would like to continue serving as a national resource and as a liaison for building the effort nationally. It’s a great model that could be used much more, with true growth potential. I hope that our campus team will continue to be considered leaders, with more national leaders developed from among our coalition and our own campus team. We have some really dedicated and committed team members, many who could be leaders due to their high level of commitment and involvement.

Diversity Digest: What are some upcoming opportunities for those interested in learning more?

Beverly Jones Williams: That’s a great question. We have our annual team interest meeting coming up on Thursday, July 25, 2019 at 3:00 p.m. in the Student Health Center, Room 2301 to tell people about NCBI and how to get involved. We welcome anyone and everyone.

We will begin workshops in August and September, so watch for them in the Diversity Digest. You can also find them in the Reporter system and add yourself to the watch list.

And lastly, anyone who has taken our Building Bridges workshop should consider taking the Finding Common Ground workshop, or even take the first workshop again, since it’s always changing and always applicable.