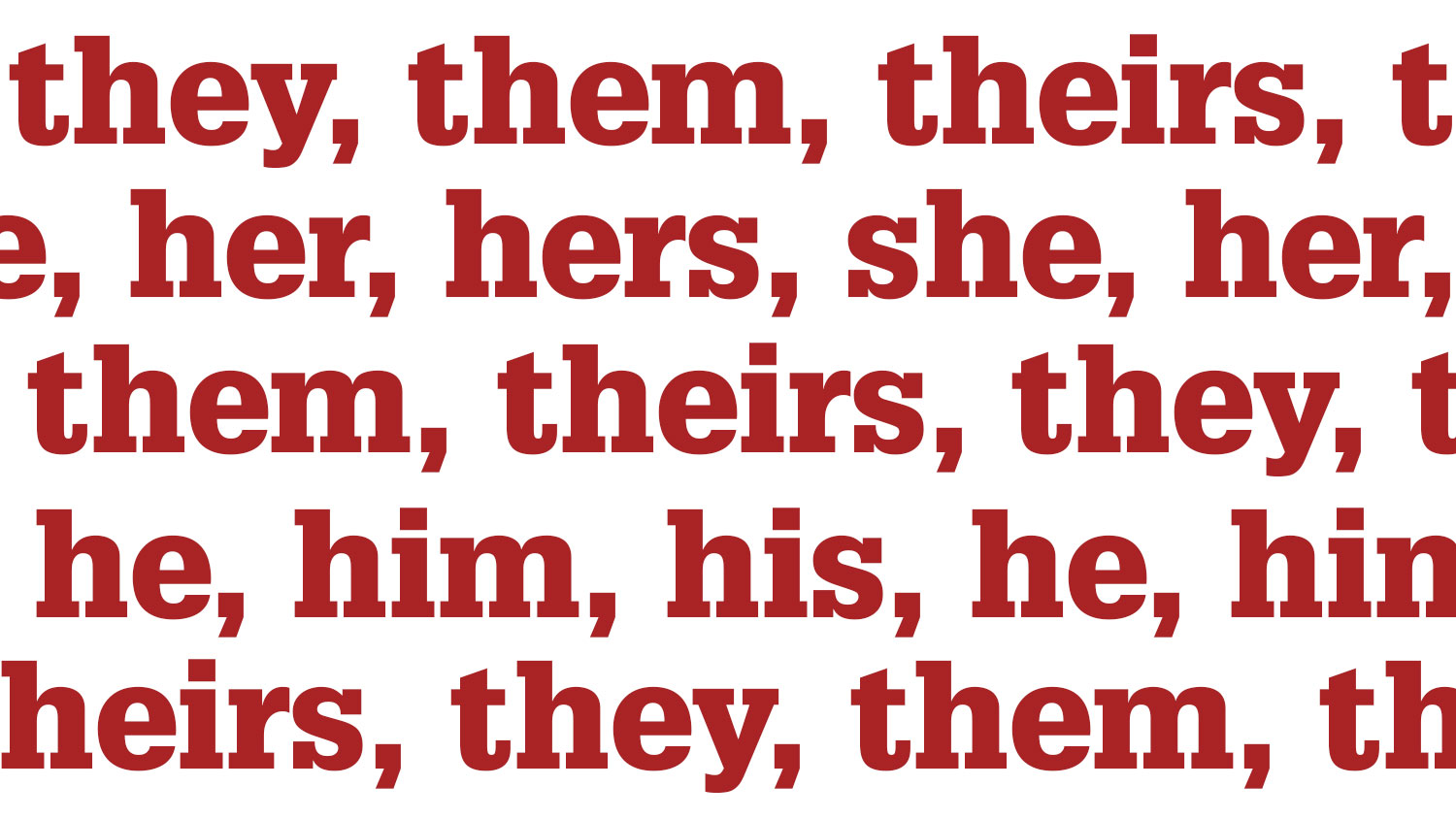 “Hi, my name is Cameron. My pronouns are she, her and hers.”

One short sentence added to a verbal introduction brings with it many different things: clarification, significance and affirmation. In return, it gives others understanding, a space to feel included, and the opportunity to affirm others.

In keeping with this goal, the Office for Institutional Equity and Diversity now includes personal gender pronouns for those who wish to include them in our staff directory as an example of inclusive best practices.

What are personal gender pronouns?

Years ago, we learned about pronouns in school. For those of us who came of age more than five years ago, most likely it was a matter-of-fact affair. He, she, they — it was all about spelling, grammar and using them in a sentence.

Today, we learn about pronouns again in the context of gender identity, which has always existed but can be a new concept for some. Let’s review these concepts.

When we are born, a medical provider assigns us a label — male, female, or intersex — based on the appearance of our external genitalia. This is sex assigned at birth. Depending on that label, we are expected by others to grow up to become men or women.

For some people, their deep, internal understanding of themselves, called gender identity, does not correspond to the sex assigned at birth or the gender socially associated with that sex. For example, someone assigned male at birth may identify as a woman, or someone assigned female at birth may identify with no gender, etc. The umbrella word we use for this experience is transgender. The word cisgender describes someone who is not transgender (e.g., someone who is assigned female at birth, identifies as a girl, and grows up to identify as a woman).

The actions people take to convey their gender is what we call gender expression, but it’s important to understand that you can’t know someone’s gender identity based only on their gender expression. The only way to know the correct way to refer to someone is to ask. Just as we ask people for their name, we need to also ask people for their pronouns. There are many pronouns to choose from, such as he, him, his, she, her, hers, they, them, theirs and other variations, such as ve, ver, vis, xe, xem, xyr and xyrs.

What Does ‘They’ Mean?

Many people use one of two common sets of pronouns: “he,” “him” and “his” or “she,” “her” and “hers.” But for others who may identify as nonbinary, the use of “they,” “them” and “theirs” as personal pronouns may best describe who they are. For this reason, most English dictionaries and major publications now include the “singular they,” or use of the word “they” to refer to an individual rather than a group, as noted in a Washington Post article from early 2016.

Not only does the singular they enable transgender or gender-fluid individuals to express who they are, it also removes the need to attach a specific gender to someone when their gender identity is unknown.

Make it Part of Your Process

To acknowledge that assumptions about someone’s gender identity could be incorrect, many organizations, including NC State, have begun to encourage community members to include a brief statement of their gender pronouns as they introduce themselves within a group. Making this part of your organization’s standard operating procedure helps everyone and avoids singling out anyone. It also provides needed information without intruding on anyone’s privacy.

This article provides only a brief explanation of personal gender pronouns. More in-depth information can be gained from readings such as Pronouns Matter. Learning more about related topics such as gender expression and sexual orientation can also help provide a more comprehensive understanding of the complexities and interrelationships between gender and sexuality.

We welcome anyone who has questions to stop by the GLBT Center for more information and learning opportunities. In addition, GLBT Center workshops for 2019-20 will be available in the Reporter system at the beginning of the fall semester.