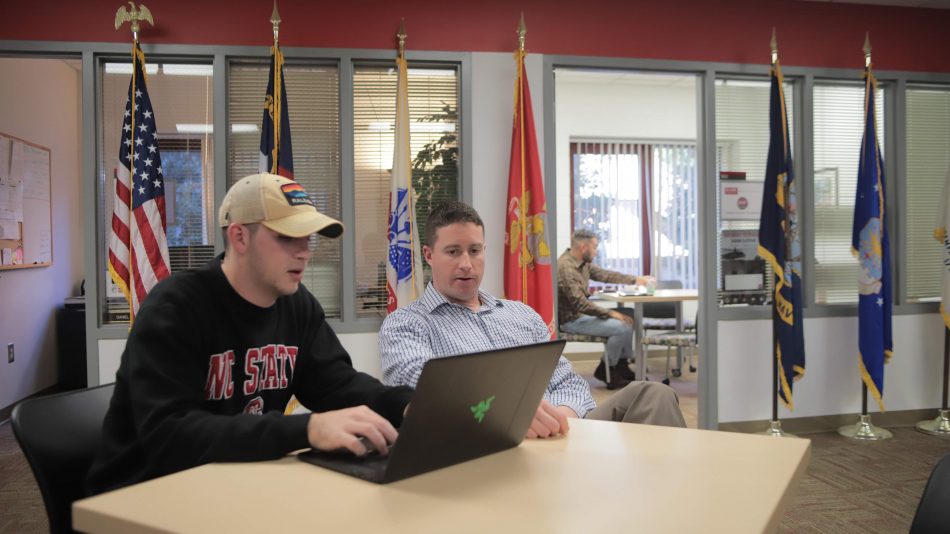 NC State has been a military-friendly campus since its founding. The Memorial Belltower, the university’s most visible monument, was initially conceived to pay tribute to alumni who served and lost their lives in World War I and now honors all veterans. 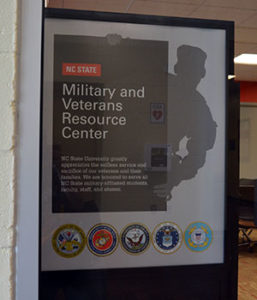 However, it wasn’t until November 2016 that the desire to truly serve and strengthen its community of military-affiliated students and veterans led to the establishment of NC State’s Military and Veterans Services Center.

Founding director Nick Drake, who previously served as assistant director of Fitness and Wellness at NC State, has worked to build the center from the ground up over the last 2.5 years.

While Drake’s two master’s degrees — one from Xavier University in sport education and one from the University of Kentucky in sport kinesiology  — led to positions in the field of fitness and wellness at the University of Kentucky, Auburn University and NC State, his extensive military background made him the perfect ‘fit’ to lead the center. He served from 2000-2010 in the Army Reserves and since 2015 as an armor officer in the Carolina National Guard after attending Officer Candidate School.

Drake has served two deployments to the Middle East, in Operation Noble Eagle and Operation Iraqi Freedom, and will leave next week for another 12-month deployment. In his absence, Juliann Kasca will serve as coordinator for the center along with Daniel Hackney, who serves as the center’s certifying official for veterans’ education benefits.

Located on the ground floor of Witherspoon Student Center, the center serves many purposes. In addition to certifying over 1,000 students for their education benefit through the GI Bill, the center supports over 2,400 military-affiliated students at NC State, including over 800 veterans and about 1,600 military dependents.

The center also provides programs, services and resources for military-affiliated students. Drake says, “We want to get them connected to on-campus resources, tapping into community resources, and resources out in the veteran world. The office provides a safe space where they can come any time with friends. We encourage them to utilize the space, and all are welcome.”

Focus Areas Include Reaching Out to Faculty and Staff

One of the center’s current focus areas is to encourage veterans among NC State’s faculty and staff to get involved. Drake encourages anyone on campus who has served in the military to connect with the center and take advantage of the community connection it offers, to learn about resources and keep informed about activities of interest, such as military appreciation events. (Anyone wishing to learn more can get on the center’s mailing list by sending email to NCStatevets@ncsu.edu.)

The center has always focused on student outreach and engagement, including orientation programs to welcome students to the center, build community and encourage connection, with attention to best practices for supporting students.

One critical part of supporting students involves educating the university community. Toward that end, the center developed Green Zone Training to educate faculty and staff on how to assist military-affiliated students as they navigate their educational careers. After two years, the training was expanded to include more information and is set to expand again to include a second module focusing on military dependents, who have specific needs that differ from those of student veterans.

Held for the past five years as an initiative of the Governor’s Institute of North Carolina, the first STRIVE (Student Transition Resource Initiative for Veterans’ Education) Conference in 2014 convened 200 participants. Feedback indicated that holding separate conferences in four regions of the state would better serve North Carolina’s military-affiliated students, resulting in conferences each year in the east, central east, Charlotte area and western regions of the state.

This year’s central east regional conference took place on June 6, 2019 at NC State, serving 378 participants, a total nearly equaling last year’s attendance for all four locations. Drake credits its success to the efforts to tailor this year’s presentations and exhibitors based on feedback from prior conferences; support from Eileen Haase of the Counseling Center; and diligent efforts from student workers to recruit attendees and presenters, garnering representation from 42 public and private two- and four-year institutions, including 13 North Carolina institutions.

Some of this year’s conference highlights included speaker Jared Lyon, president of the Student Veterans of America, a student veterans panel and a military dependents panel.

Drake cites his personal highlight as the military dependents panel, “Ask a Military Kid,” noting that it was the “biggest infusion of something new that we haven’t had in years past.”

He hopes faculty and staff attendees gained a better understanding of the strengths that the veteran student provides in the classroom, such as a worldly perspective that comes from being well-traveled, a greater level of maturity from experience holding obligations such as a full-time job, and unique circumstances that shape veterans, as well as an understanding of the resources that exist and how to get them.

In its drive to become a formalized, recognized entity, the center has worked to establish a foundation to be able to receive gifts. It has already secured a major gift to the NC State Military and Veteran Service Enhancement Fund — the Jeff Wright Military and Veteran Service Endowment, a $250,000 endowment given last November. The center also raised additional matching funds in conjunction with this gift from 100 donors totaling $59,000, a separate grant of $19,000, and numerous smaller gifts. The center aims to eventually eliminate dependence on student fees and become self-sustaining.

After his deployment ends, Drake will be back and ready to continue growing the center in its messaging and outreach to its key demographics and audiences, both on- and off-campus.

His ultimate goals are to expand the permanent staff of the center and one day, to attain a $2.5M endowment to name the center.

In the current upward trajectory of the center, it doesn’t seem unlikely.