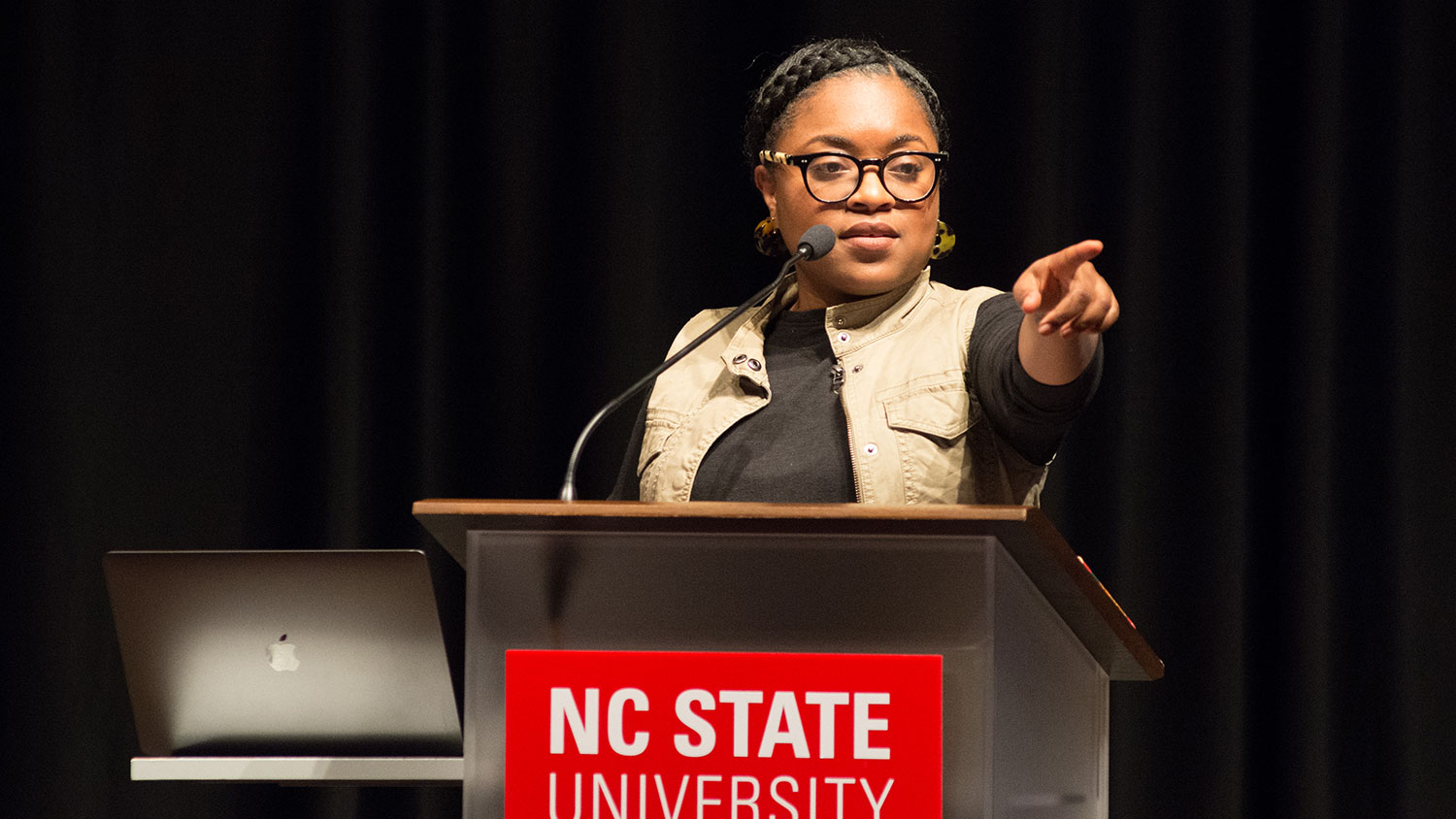 As we mark the end of Womxn’s Herstory Month in March, it’s important to acknowledge that we use womxn to include trans* womxn and womxn of color who have historically been excluded from many women’s organizations and activism. The Women’s Center’s theme for this month highlighted the lives and experiences of womxn around the world.

The theme was Our Voices, Our Bodies, Our Stories: Tools for Radical Transformation. Many events happened during the month that helped us remember womxn of the past and learn from them to radically alter society. During the weeks leading up to Womxn’s Herstory Month, one of the most highly-anticipated programs included a visit with Charlene Carruthers, a Black, queer, feminist community organizer and writer and this year’s Womxn’s Herstory Month keynote speaker.

In honor of Carruthers’ visit, the Women’s Center’s hosted a Black History Month Book Club, facilitated by Chaniqua Simpson, about Carruthers’ book, Unapologetic: A Black, Queer, and Feminist Mandate for Radical Movements. Not only did the book club serve as a link between Black History and Womxn’s Herstory Month, but it also created dialogue surrounding gender, sexuality and race within social justice work and activism. Additionally, it highlighted the stories and lived experiences of Black folx who are often left out of the common narrative. A quote from Carruthers’ book embodied the work of Womxn’s Herstory Month:

“What we believe to be true matters for our movements. What we believe impacts how we move in the world, what we imagine is possible, what we choose to fight for, and what we fight against. But believing in something is never enough. We must turn our beliefs into collective action (Carruthers, Unapologetic, pp. 11-12).”

When asked to reflect on the book club and what it meant to read her book prior to her arrival on campus, facilitator Chaniqua Simpson said:

“I think the Black Herstory Month Book Club was a great way to connect Black History Month and Womxn’s Herstory month in a tangible way. We often miss the stories of Black trans and cis women, particularly those who are queer, when we talk about Black History month. So, I thought it was a great way to connect the two months and to connect it to the work of our keynote speaker. Charlene’s book, even thought it was about activism and organizing, was super useful for us as students and staff. We explored our roles in the organizations and institutions that we inhabit and thought critically about how we can change these organizations to be more inclusive and accessible to the most marginalized. The book helped us put Charlene’s talk into context and I think having read the book allowed us to walk away from her talk with a deeper understanding of the work she does and how we can use the book in our own lives.”

It’s clear this book and the book club surrounding it engaged in a vital conversation that relates to the Womxn’s History Month theme; they learned more about how to use their voices, bodies and stories to inform their own activism, as well as the activist work of the institutions they’re a part of.

While the Unapologetic Book Club was going on, so was the Women’s Center’s Spring Book Club, reading This Bridge Called My Back: Writings by Radical Women of Color, edited by Cherríe Moraga and Gloria Anzaldúa. This book club, facilitated by Brooke Suermann, continues until April 15, 2019. This Bridge Called My Back is an essential and life-changing book for any feminist, activist and/or womanist. It’s life changing because it challenges any preconceived notions one may have about race, gender, class, sexuality and so much more. It steps on your toes in all the right ways. It is a call-to-action and can help individuals and organizations grow in their activist journey. For anyone interested in social justice and activist this book is a must-read.

Over the course of This Bridge Called My Back book club, its members worked to center experiences of womxn of color in their fight for social justice. Even though the first edition of the book was published in the early 1980’s, we were able to draw connections between the messages and lessons written by the womxn of color then that are still incredibly relevant today. Reading works by the Combahee River Collective, Pat Parker, Gloria Anzaldúa, Cherríe Moraga, Genny Lim and so many more powerful womxn of color started a discussion about how we can answer these calls-to-action and use them to better ourselves, those around us and the institutions in which we exist. Through this book club, I learned so much from both the womxn whose work we read and the folks that participated in the book club.

Carruthers’ keynote speech on March 19, 2019 helped me learn more about the connections of the radical womxn of color whom I read. Her keynote taught me that being radical, and intersectional, is more than an add-on or afterthought. Both are active choices that must be cultivated. To be radical and intersectional starts at the framework of an organization or movement and to work effectively, it must be in place from the beginning. Carruthers also discussed liberation, and differentiated between liberation and freedom, stating that liberation is permanent while freedom is not. Throughout her keynote, Carruthers referenced historical womxn of color, criticizing their treatment by society and uplifting their contributions, especially those that history tends to glance over or ignore.

One of the most impactful moments of Carruthers’ keynote was when she said liberation must be done for yourself, not just for other people. She said, “Black women aren’t here to save y’all, we’re here to save ourselves.” She noted during the keynote and in her book, you must have a stake in the game for your work to really be radical and transformative. Carruthers closed her keynote by leaving the audience with five critical questions necessary for evaluating the success and health of activist movements: Who am I? Who are my people? What do we want? What are we building? Are we ready to win?

Everything that occurred during Womxn’s Herstory Month, from the Unapologetic book club to the This Bridge Called My Back book club and Carruthers’ keynote speech has taught me so much that it’s staggering. All of these different events converged in ways I never could have imagined. For example, I’d be sitting in the This Bridge Called My Back book club and thinking about something I read in Carruthers’ book. Or I’d be in one of my Women’s and Gender Studies classes and connecting the theory directly to the words and work of the powerful womxn of color I was reading about. Even though I wasn’t able to participate in the Black Herstory Month Book Club, I still read Unapologetic. I’ve learned so much by critically reading and engaging in a dialogue about activism and important social issues. In her book, she gave voice to the unheard and structure to those who had no idea where to start. She gave me a place to start.

In the words of poet and activist Pat Parker, from her speech printed in This Bridge Called My Back entitled, Revolution: It’s Not Neat or Pretty or Quick:

“In order to survive in this world, we must make a commitment to change it; not reform it — revolutionize it … You and I are the “She Who” and if we dare to struggle, dare to win, this earth will turn over.”

Brooke Suermann is a junior who is double majoring in English with a concentration in creative writing and Women’s and Gender Studies. She is also an intern in the Women’s Center.