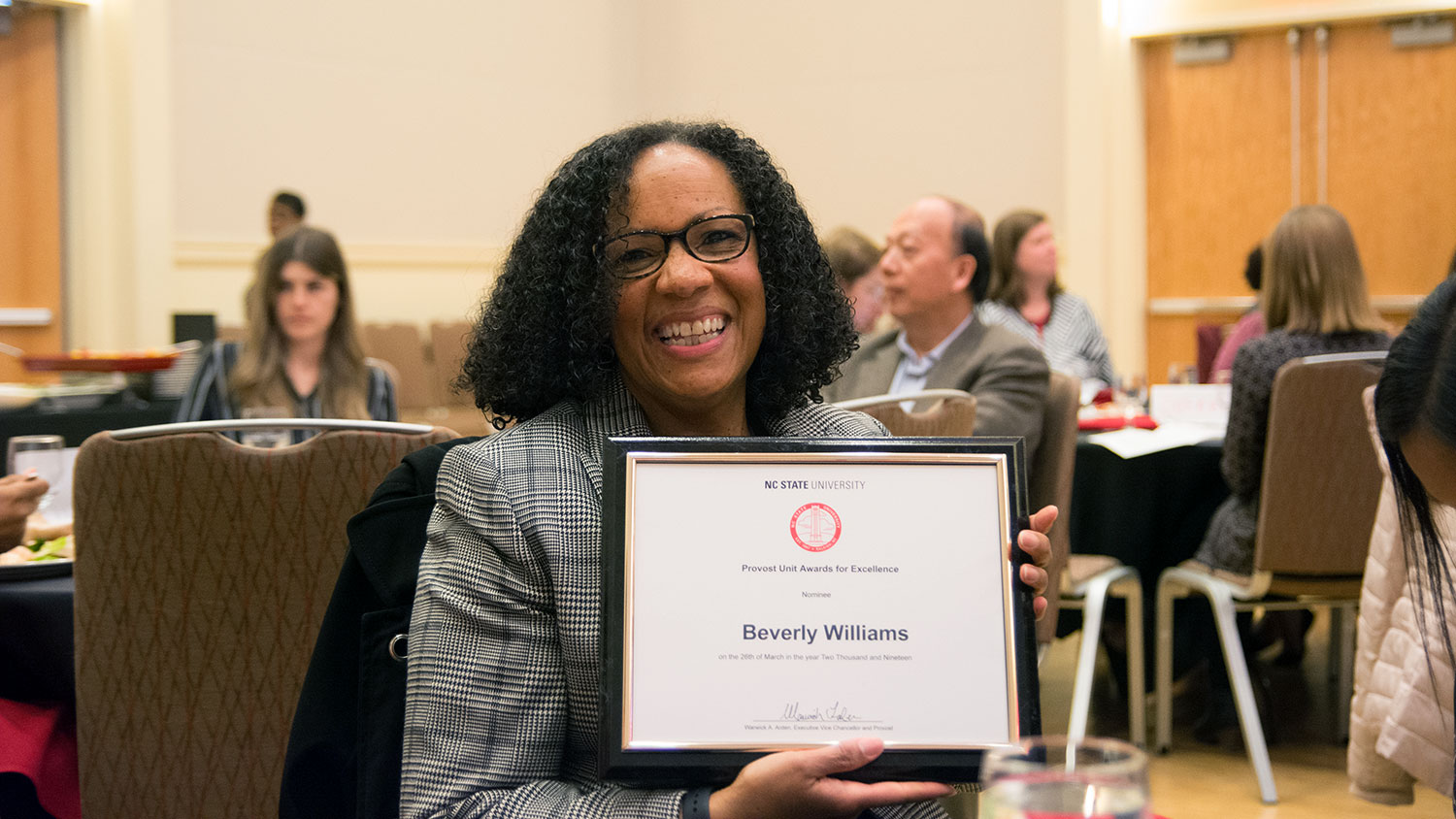 Beverly Jones Williams, director of outreach and education in the Office for Institutional Equity, was recognized as a Provost’s Unit nominee at the 2019 University Awards for Excellence.

Winners received eight hours of paid leave, an engraved plaque, a check for $250 and will represent Provost’s Office units at NC State’s University Awards for Excellence in June.

“Few people have had the impact of Beverly Williams as a force for greater good at NC State.

Beverly first arrived on campus in 1986 as an area coordinator in Housing. Except for a one-year stint at the University of Tennessee in 1988-89, she has been here at NC State, serving as an assistant director in Housing, then moving to Human Resources in 1994 before joining the Office for Equal Opportunity (OEO) in 2000 as program coordinator. She became director of outreach and education in the newly expanded Office for Institutional Equity and Diversity (OIED) in 2011, overseeing diversity, equity and inclusion training for the university.

The common thread in all of Beverly’s work has been educating people in the areas of personal development and diversity and inclusion. In Housing, she worked on the university-wide quality improvement program (CQI) and helped to establish Metcalf Learning and Living Village, which later became the First Year College. She chaired both the Professional Development Committee for Student Affairs and the Multicultural Affairs Committee, developing workshops and training. After her move to HR, she began developing diversity workshops specifically.

In OEO, Beverly’s talents in the areas of diversity and inclusion began to shine. She developed and expanded Take Our Daughters to Work Day, Study Circles on Race and Ethnicity and two programs that continue as major university initiatives: NC State’s National Coalition Building Institute campus affiliate team and the Equal Opportunity Institute. Beverly also coordinates over 40 NC State diversity, equity and inclusion workshops each year, bringing in expert facilitators from local and regional organizations.

For nearly two decades, NC State’s National Coalition Building Institute (NCBI) team has forged a strong presence on campus and beyond. The other major program for which Beverly is well-known on campus is the Equal Opportunity Institute (EOI), which celebrated its 20th anniversary last year. By the end of the current year, EOI will have graduated over 500 participants since the program’s inception.

While overwhelmingly positive participant evaluations clearly show the continuing success of these programs, the true impact that Beverly has had can be seen and felt in her personal interactions. A good listener and valued collaborator known for her thoroughness and attention to quality, Beverly has many colleagues all over campus who call her a mentor, a friend and an expert on bridging differences and bringing people together for productive discourse. She looks for the good in everyone and truly embodies the principles that she teaches.”