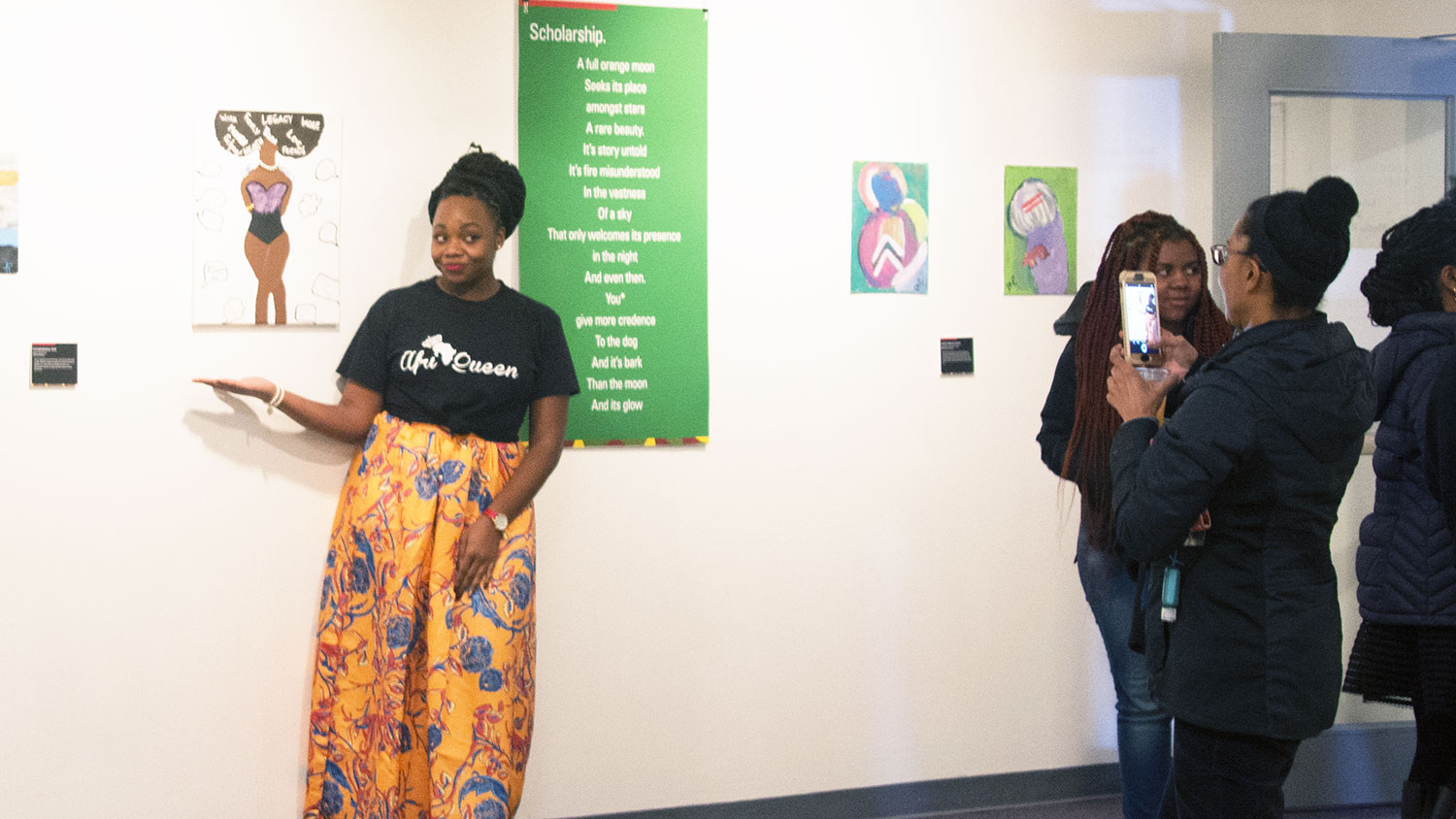 I had the pleasure of attending the opening reception of “The Politicization and Sexualization of Black Bodies” exhibit, hosted by the Women’s Center and the African American Cultural Center. The exhibit showcased poetry and paintings, created by students, faculty and staff, which depicted Black bodies and told the story of what it means to have a Black body in predominantly White, male-dominated spaces, such as NC State. The exhibit is every much rooted in critical race and Black feminist ideologies, such as centering Black women’s experiences as valid and counterstorytelling to challenge dominant societal narratives.

The reception featured and centered Black women’s voices, including the reading of a poem by Audre Lorde, titled “Need: A Chorale of Black Women’s Voices”; a student speaker, senior Zakiya Covington; and a keynote by delivered a beloved member of the Black community at NC State, Toni “Mama” Thorpe. This exhibit is so timely, not only because of its proximity to Black History Month, but also because of the recent conversations surrounding Black women in popular culture and the frequent of commodification of Blackness. The exhibit challenges the audience to think about the Black body’s journey from exploitation to liberation. Educator, philosopher and  leading advocate of critical pedagogy Paulo Freire said:

“The oppressed, having internalized the image of the oppressor and adopted his guidelines, are fearful of freedom. Freedom would require them to eject this image and replace it with autonomy and responsibility. Freedom is acquired by conquest, not by gift. It must be pursued constantly and responsibly. Freedom is not an ideal located outside of man; nor is it an idea which becomes myth. It is rather the indispensable condition for the quest for human completion.”

At a reception following the presentation, both speakers discussed how they rejected the images their oppressors created, replaced them with their own conceptualization of beauty and self-love and how they unapologetically embrace their Black womanhood, regardless of who is in the space, or what space they are in. The message here is that although Black women’s bodies have historically been exploited, oppressed and ridiculed, we still find ways to love and accept our bodies and create our own definitions of beauty. As Mama Thorpe mentioned, these stories of self-love are often silenced in favor of dominant, controlling narratives about our bodies and our capabilities. As Black women, we know this, but others need to hear our stories and understand that their definitions of beauty does not define us.

Events such as these challenge historically-situated gender, racial, and gendered racial ideology that maintain the problematic and harmful institutions that are White supremacy and patriarchy. Such is the reason why counterspaces exclusively for women and non-binary identified students and Black students are necessary, especially on a campus that did not grant a bachelor’s degree to women until 1927, Black male students until 1960 and Black female students until 1966. It is the reason why an exhibit so radical, critical and empowering took place in between Black History Month and Women’s HERstory Month. It is the reason why the event took place in the cultural center as opposed to the student union, a space that could have held more people, allowing for a larger audience to be exposed to the oppositional knowledge that is being a Black woman and centering Black womanhood.

Spaces and events such as these are why I believe so much in the power of Black feminist thought. Patricia Hill Collins explained that Black feminist thought possess a “commitment to justice, both for U.S. Black women as a collectivity and for that of other similarly oppressed groups.” This aligns very well with this exhibit and bell hooks’ concept of “teaching to transgress.” Although this was not a traditional classroom setting, the exhibit is one that presents oppositional knowledge, which pushes “beyond the boundaries of what is acceptable, so that we can think and rethink” and “makes education the practice of freedom.” This idea of freedom was referenced several times throughout the reception. Giving students of various backgrounds and identities a stake in the knowledge production process, in both formal and informal settings, is a practice of freedom. Providing spaces and places for counterstorytelling is a practice of freedom. The storytelling and oppositional knowledge produced throughout the event and exhibit align very nicely with the African proverb Mama Thorpe repeated throughout her speech:

“Until the story of the hunt is told by the lion/ess, the tale of the hunt will always glorify the hunter.”

Ezinne Ofoegbu, M.Ed., (she, her, hers) is a second-year doctoral student in higher education and a graduate assistant in Living and Learning Initiatives.