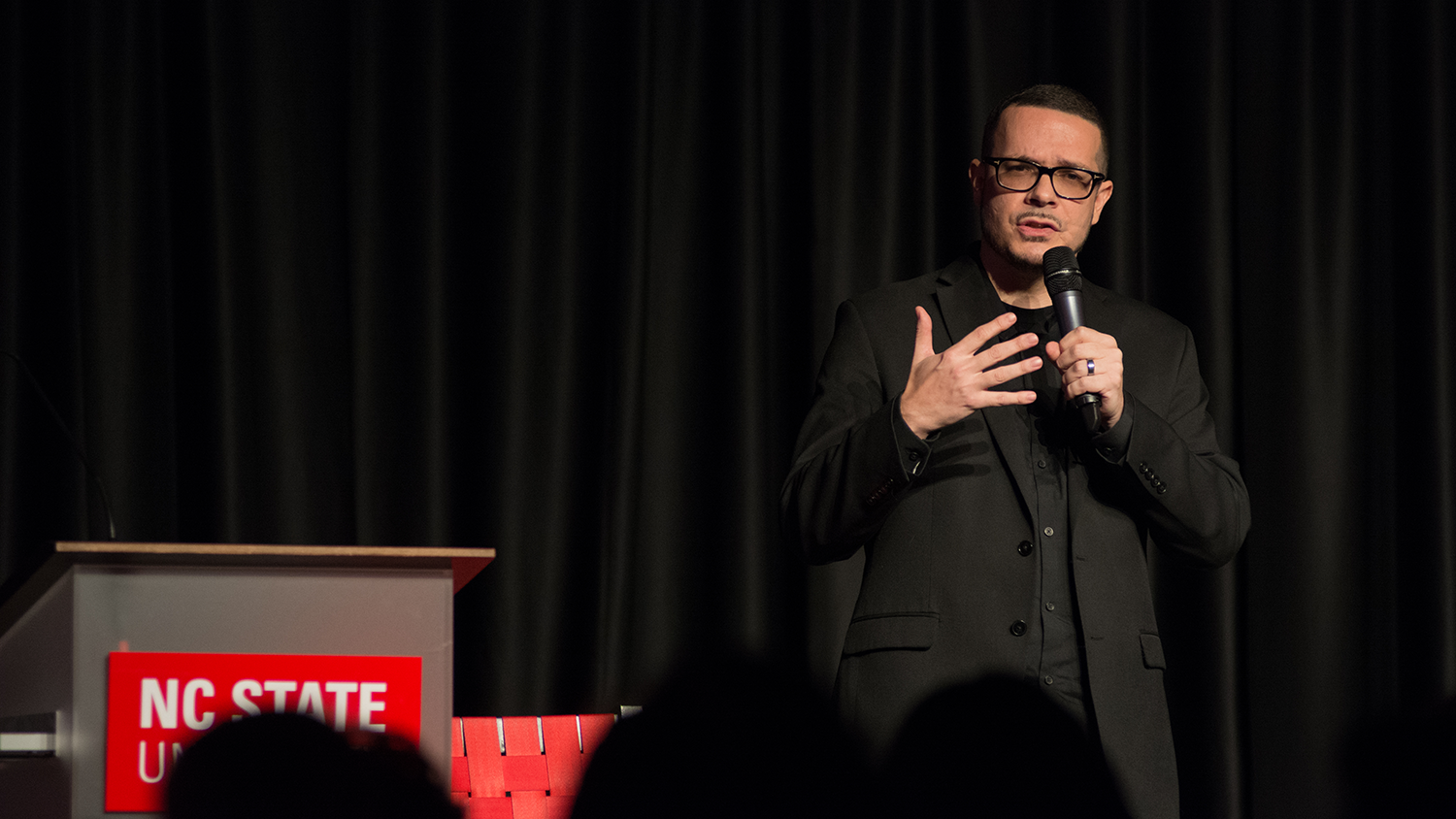 Civil rights activist Shaun King visited NC State as part of a lecture series in honor of Black History Month on Monday, February 11, 2019, hosted by the NC State Department of Social Work. King arrived despite a recent foot injury to speak on “Cultivating Community and Creating Social Justice for All.”

Though many know King through his social media account @shaunking and as a political commentator and activist, he self-describes as a father and historian first and foremost. As one of the most vocal and visible leaders of the Black Lives Matter movement, King commented that he “finds , in these problematic times, latching onto roots as historian,” recollecting an instance where he was sitting in a graduate history class. Shown the image of German historian Leopold von Ranke while learning about ‘the history of historiography,’ “I thought, what could this hairy, old, white guy teach me?” King said with a laugh.

At the time, seeing the image of Ranke upset him; seeing a white male in the classroom who, to King, represented the history of injustice where white men “determined how stories get told and whose stories told” was too much for him. King admitted that he attempted to drop the class but was unsuccessful “I thought, ‘I can’t take this class right now’… but I was stuck in the class… all the classes with the ‘woke’ professors were full.”

Despite his initial response to the class, this experience was a life-altering moment for King. Ranke, as King soon learned, had compiled thousands of stories of the human experience from across the globe to create the first detailed timeline of human history in the 1840’s. “His expectation,” said King, “was that if he put all in chronological order, that humans were getting better … He found, not in chronological order, where sometimes human beings were amazing and sometimes human beings were terrible… had confused the steady improvement of humanity with the improvement of technology. people aren’t getting better, it’s just their gadgets.”

In 2014, when King was working for an international charity, Global Green, a friend sent him the video of Eric Garner’s death. Garner, a black male who died by strangulation during an altercation with a police officer, reminded him of the 1999 shooting of Amadou Diallo. Both men, were unarmed at the time of their deaths at the hands of police officers who were later acquitted. “Friends from college always saw me as ‘Shaun the Organizer’” King said. His friends and wanted to know King’s plan to bring justice to the families of men like Garner and Diallo.

King and his fellow activists began to seek justice for families affected by police brutality. King met with the families of Michael Brown Jr. and John Crawford III to seek justice for the deaths of their loved ones. “People began following, supporting and chanting ‘Black Lives Matter’… I couldn’t imagine a world where the family of Eric Garner did not get justice… and in that winter of 2014 we learned that there would not be justice for any of them. 1,100 people killed by police in 2014 none were held responsible… system was designed so that no one would be held responsible” King recalled.

Afterwards, King was “stuck in a deep funk… it went against everything about America” for these officers to be acquitted. As King began to investigate the national deaths of men of color at the hands of police officers, he made a shocking discovery. “The Washington Post won a Pulitzer Prize on this… we didn’t know that it’s not people getting killed by police every couple of weeks, but it’s every three to four hours,” King said. “How many times have you seen something and thought ‘that’s wrong’?” King asked the around 700 attendees at the lecture.

Thinking back to Ranke, King recalled the stories of Garner, Diallo, Brown and Crawford, and how despite 2019 “being on pace to be the deadliest year , no one can name any … their stories are not being told.” Based on these statistics, King believes that the increase in people of color being killed by police officers during altercations represents of low point in human history and that it is society’s duty to address the issue. “We are experts in our pain, but not the plans to get out of it,” said King. “It is hard to make a plan when your house is on fire.”

King’s lecture poses the question to all who are striving for social justice in the modern era, how do we ensure that everyone’s story is told?