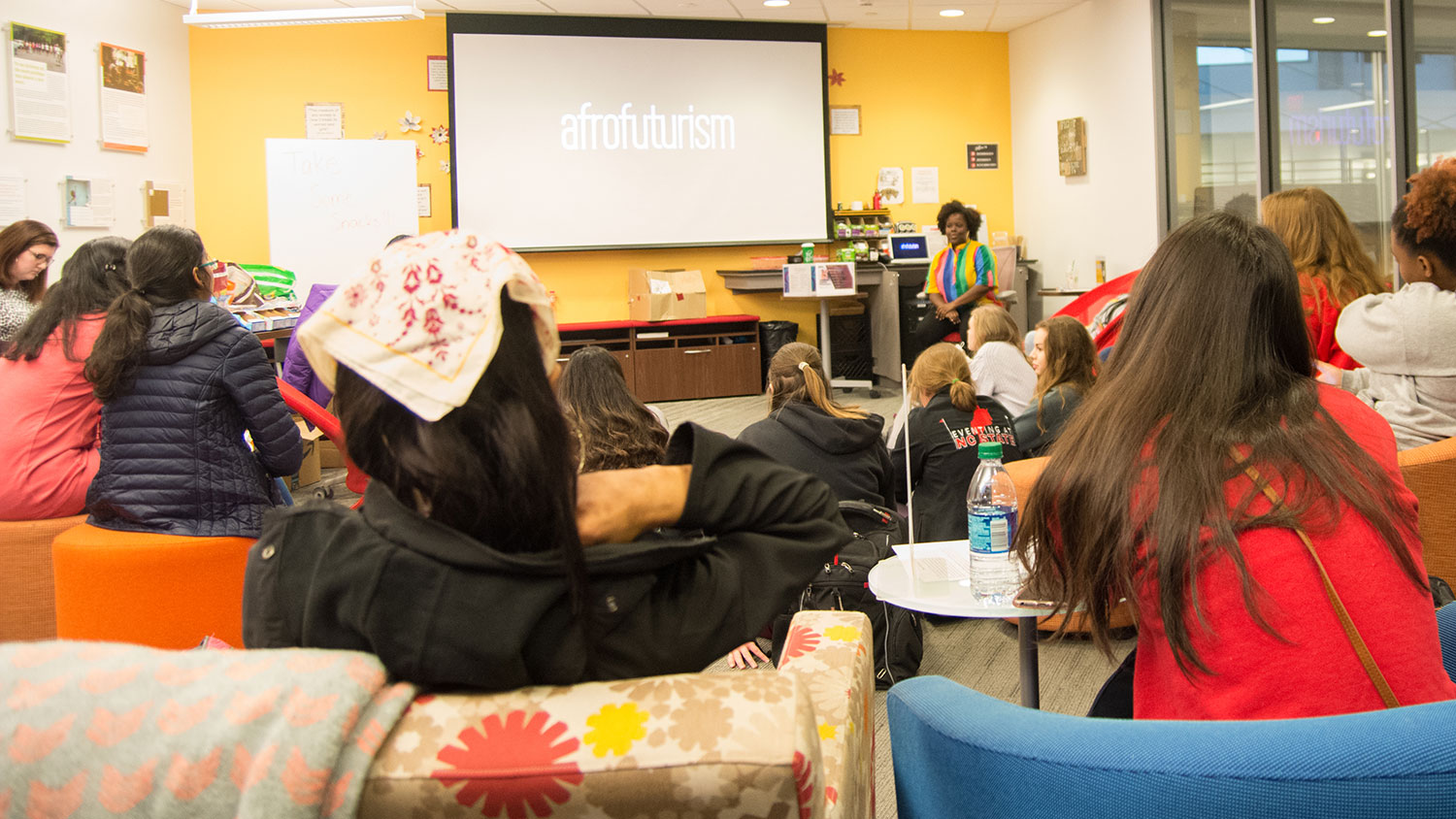 On Friday, January 11, 2019, the Women’s Center and Women of Welch (WOW) welcomed back students with a showing and discussion of Janelle Monae’s Dirty Computer e-motion picture. Students from various parts of campus came to watch the film and talk about what the artists’ work, vision and film means for them in the current moment.

The e-motion picture, which is set in a possibly “not-so-distant” future, features the artist being held in a chamber, attempting to remember bits of her past. Monae is a “dirty computer” who needs to be wiped clean in order to fit in with society. As Monae was being unwillingly prepped for the final stage of memory clearing — a computer reboot, if you will — students were transported into her memories, visions and dreams.

Students who attended the viewing shared thoughts on the ideas of Afrofuturism and what that looks like for Monae and in broader African/Black culture currently. Students came up with a definition of Afrofuturism — the incorporation of science, arts and technology through a black lens — and decided that Monae’s film does this through elements of suspense, uncertainty, struggle and liberation, putting them “on the edge of their seat the whole time.”

Students enjoyed discussing the types of futures Monae envisioned in her e-motion picture. These futures included one without labels or hierarchy. This was a future where people had control over their sexuality.

Shantoneeka Zorn reflected, “I love the album. I am a fan of Janelle Monae, resident pansexual, and it was great to have conversations about Afrofuturism. I enjoyed hearing the reflections of the other attendees, particularly how we all identified as “dirty computers.” The event was powerful and thought-provoking.

Throughout the discussion, the idea that those in power had the ability to label anything outside the ordinary as inferior or as dirty resonated with the students. In Monae’s world, dirty is queer. Dirty is wearing different clothing. Dirty is being sexually liberated. Dirty is owning and claiming your body. Dirty is living outside of the norms of society. Here, Janelle Monae is a black queer woman trying to live in a world that’s free and loving. One where she tries to take ownership over her sexuality, her body, her power. The group tied Monae’s film to how Europeans forcefully assimilated different groups through colonialism, most notably indigenous groups in the United States.

We ended the event with ways that we identified as dirty computers. While some members hesitated, we quickly came to the conclusion that dirty computers are just outside the norm of dominant white, male, heterosexual standards. Many students were able to see themselves as dirty computers, whether it was because of their race, their religious beliefs, their sexuality, their gender identity, their style of clothing, their opposition to capitalism, their status as women (particularly women of color) in STEM or in traditionally-male dominated fields.

Chaniqua Simpson is a doctoral candidate in sociology and anthropology and a graduate assistant in the Women’s Center.