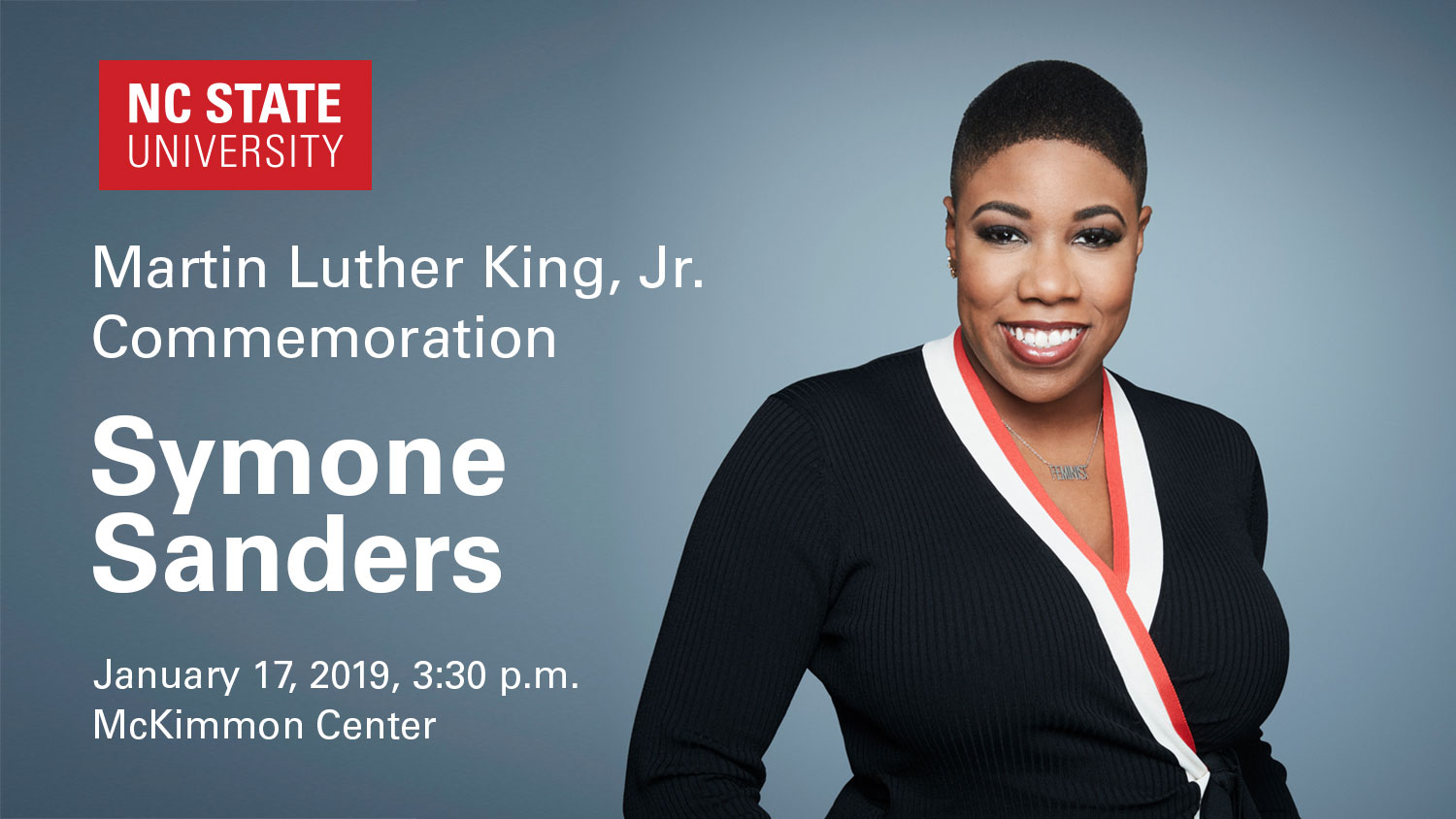 From Realism to Reality:
Celebrating the Life and Legacy of Dr. Martin Luther King, Jr.

“The only thing that has ever moved the needle in this country — in our communities, in our neighborhoods — is bold, radical and revolutionary change.” — Symone Sanders

Join us as we welcome strategist, communicator and commentator Symone Sanders as this year’s Martin Luther King, Jr. Campus Commemoration speaker. Sanders will highlight King’s ability to push boundaries to achieve what others had not done before as she speaks on MLK, Jr.: The Realist.

As a CNN commentator, Sanders provides her insightful analysis on political and social issues. She has also appeared on NPR, Fox News, MSNBC, NBC, BET and TV One and has been featured in the Washington Post, the New Yorker, ESSENCE Magazine and ELLE.

Currently, she serves as principal of the 360 Group, LLC, providing strategic communications guidance to organizations, businesses, individuals, campaigns and candidates.

Submit a question for Symone Sanders online
and your question might be answered during the event.

“I Am A Man” Exhibit and VR Experience Opening

The “I Am A Man” exhibit’s award-winning virtual reality experience returns to NC State for a three-week run in the African American Cultural Center’s Art Gallery. Join us for the opening event and visit the exhibit through February 4, 2019.

Created by Assistant Professor of Design Derek Ham, the exhibit features the work of College of Design students who designed museum installations for the National Civil Rights Museum in Memphis, Tennessee as part of its MLK50 Celebration in 2018.

Participants experience the perspective of an African American sanitation worker during the 1968 sanitation workers’ strike in Memphis and the civil rights movement before and immediately after the assassination of Martin Luther King, Jr.

Lunch and Learn with Jason Miller

Join Professor of English Jason Miller as he speaks on the legacy of the recently unearthed 1962 speech that Martin Luther King, Jr. gave at a segregated high school in Rocky Mount, North Carolina several months prior to his famous “I Have a Dream” speech in Washington.

Until recently, no one beyond the crowd present for the speech in 1962 had heard it. Recovered from a Rocky Mount library and remastered, the speech is now believed to have inspired King’s pivotal I Have a Dream speech delivered in Washington nine months later.

At NC State, MLK, Jr. Day is not a day off but a “day on.” Join students, faculty and staff in a day of service and interfaith reflection to honor Martin Luther King, Jr.’s legacy of interfaith work and how people of diverse faith and non-faith can come together to create a more socially just world.

Martin Luther King, Jr. inspired us to forge a more socially just world by advancing racial and economic justice in our communities. Join Leadership and Civic Engagement’s special edition of Mystery Service Saturday to connect NC State students with the community in a way that commemorates MLK’s legacy.