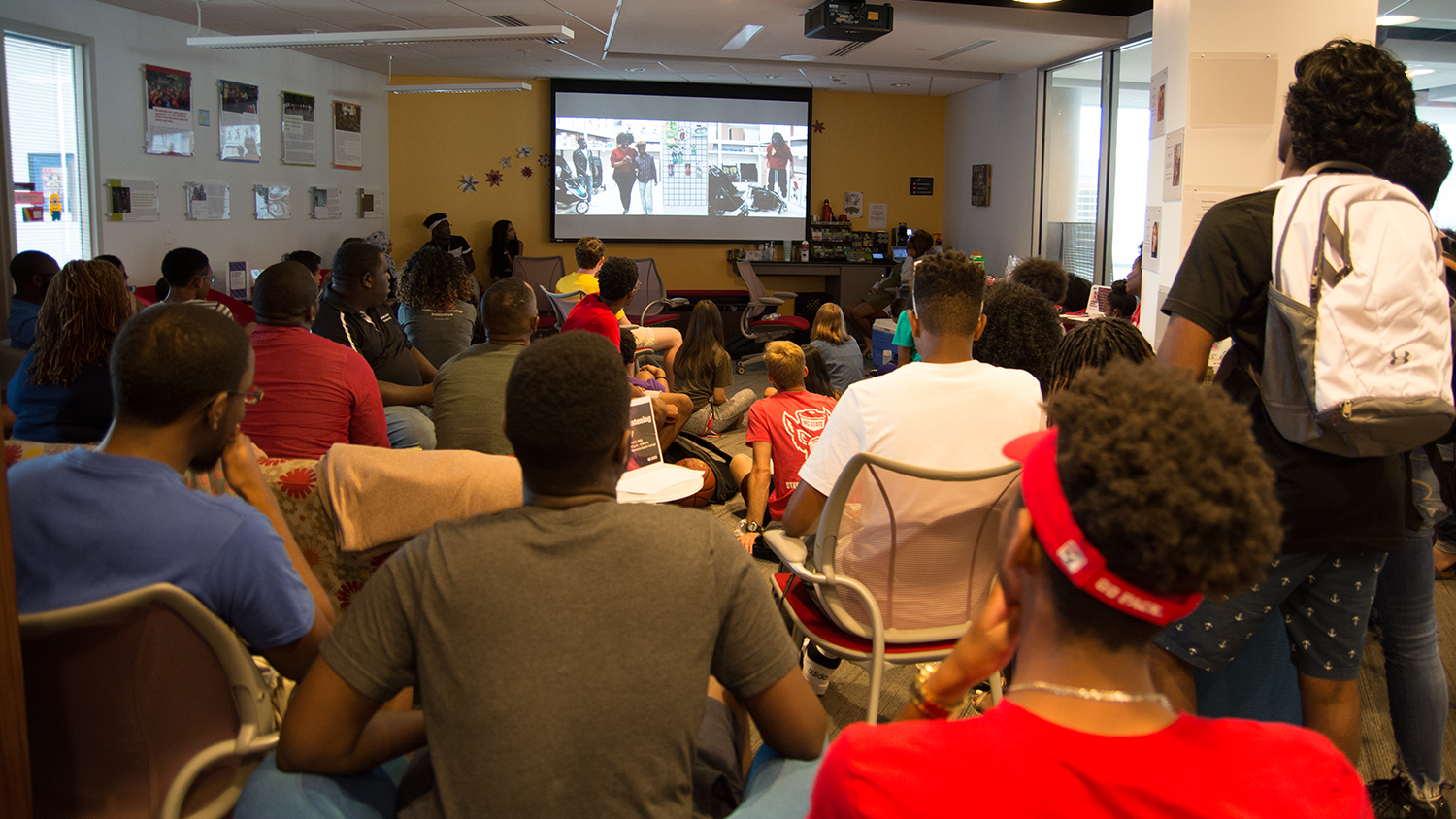 The Women’s Center hosted its Welcome Back Wolfpack Listening Party on August 24, 2018. The session focused on KOD, the fifth studio album of artist J. Cole, who is originally from Fayetteville, NC. Previous listening parties featured Beyonce’s Lemonade and Jay-Z’s 4:44. The listening parties provide an opportunity to experience the artist’s featured work and discuss it from academic, social and personal perspectives.

In partnership with the Black Male Initiative (BMI) and the African American Cultural Center’s AYA Ambassadors, the center hosted a panel that discussed themes in the work, including Black masculinity, pluralistic Blackness, the social stigma of mental health within the Black community, parallels within other communities of color, the disembodiment of Blackness from mainstream ideas of pain and struggle, binary classifications of race, gender and sexuality and notions of performativity.

The listening party and panel discussion emphasized two of the central tenets of critical race theory (CRT), Whiteness as a property and interest convergence, to connect the themes in KOD, reflecting historical truths about the war on drugs and how the racial caste system appears in contemporary society, as described in Michelle Alexander’s The New Jim Crow: Mass Incarceration in the Age of Colorblindness.

Additionally, as seen in NC State’s common reading selection for 2018-19, $2.00 A Day: Living On Almost Nothing in America, KOD also referenced forms of addiction as survival strategies used by impoverished people of color, particularly Black/African Americans, to deal with the inequalities and inequities they face.

The books provided context for the discussion of how systems affect the everyday lived experiences for people with minoritized and marginalized identities within structures that are suited and equipped for dominant and more privileged groups.

Dialogue that arose from the listening party and panel conversation included student, staff and faculty reflections on gentrification, gerrymandering, the erasure of Black women, the normalization of violence and the appropriation of the culture and experiences of people of color.

Second-year student Dani Dalton, double majoring in women’s and gender studies and communication studies, stated that the KOD Listening Party “definitely allowed room for deep reflection on the Black experience, the Black male experience especially, and that experience on campus. The event allowed us to discuss openly and honestly. It was very freeing to recognize what is actually going on.”

One African American female-identified student who noticed themes of coping with pain and trauma, stated that “Black people are already not allowed to feel vulnerable, but Black men especially do not deal with their pain. Prison systems oppress black people to the point where prison is the end of the line.”

A multiracial, Black, Asian and White male-identified student stated, “My takeaway is the social construct of race and gender is used to divide instead of unite people.”

We invite you to attend the Spring 2019 Welcome Back Listening Party on January 11, 2019 from 4:30-6:00 p.m. in the Women’s Center. Listen and discuss Janelle Monáe’s Dirty Computer. Monáe’s self-described emotion picture will be shown earlier in the day.