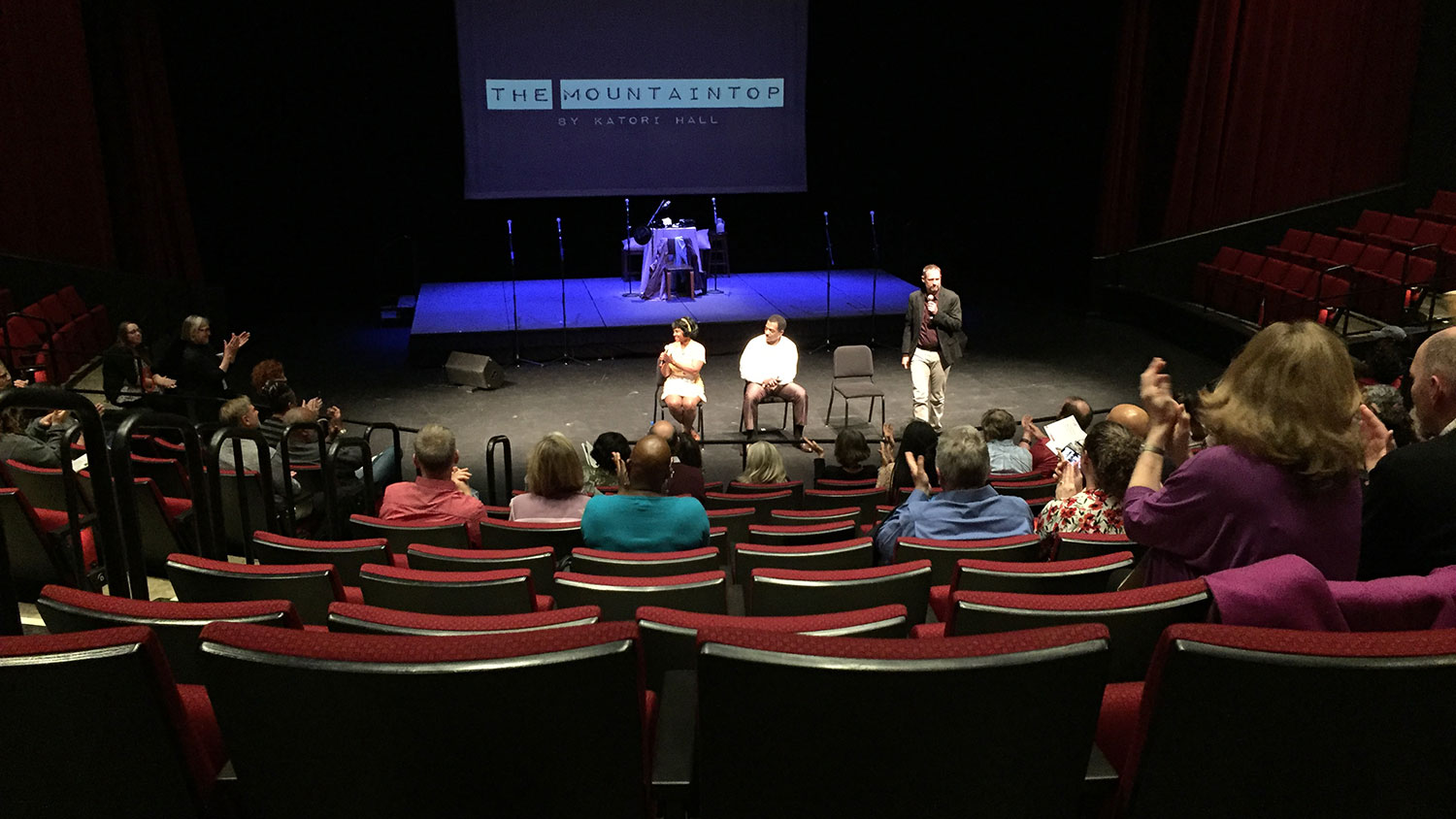 On Tuesday, April 17, 2018, L.A. Theatre Works presented a flawless performance of Katori Hall’s The Mountaintop in NC State’s Stewart Theatre. The Oliver-winning play, which first premiered in London in 2011 as Broadway production starring Samuel L. Jackson and Angela Bassett, stopped at NC State toward the end of a 4-month, 38-city tour to mark the 50th anniversary of the death of Martin Luther King Jr.

L.A. Theatre Works employs an “audio-friendly format,” in which actors face the audience and speak directly into microphones. For most of the play, the characters do not touch or face each other. While the actors may briefly interact at times, the idea is that they are fully engaged with the audience and delivering a performance that can be recorded and played on audio platforms.

In a statement to Playbill, playwright Katori Hall said, “It was really important for me to show the human side of King. During this time, he was dealing with the heightened threat of violence, he was tackling issues beyond civil rights – economic issues – and was denouncing the Vietnam War. So I wanted to explore the emotional toll and the stress of that. King changed the world, but he was not a deity. He was a man, a human being like me and you. So it was important to show him as such: vulnerable.”

Just as Hall intended, the production humanizes Dr. King in a spectacular way. The audience was truly moved – during a discussion with Brown and White following the performance, members of the audience expressed their gratitude to the actors for making Dr. King human and accessible.

Other highlights from the post-performance discussion with actors Gilbert Glenn Brown and Karen Malina White:

On the important role of the woman in the play:

At the forefront of recent movements are women and young people. White said that she is honored to be that voice as Camae and treasures the dialogue with audiences about Dr. King.

Brown pointed out that people often forget that Dr. King was human. He says that director Finney emphasized the importance of capturing the heart, soul and spirit over imitating Dr. King impeccably (although Brown delivered an impressive King-like voice as well).

On one thing the actors hope young people in the audience take away:

Brown stated that, to make change, young people should start where they are and use the tools that they already have. He highlights the vitality of human connection and engagement, something the actors had to evoke on a spiritual level since they did not touch, given the nature of the performance.

White stated that young people should recognize the dignity of each person’s humanity as they interact with people around them. She said that movements on campus create value for everyone – the mission should be to help an entire campus be totally inclusive.

On people at the forefront who fall from flaws:

White said it is important to think of leaders as humans and stop deifying them. There needs to be space for people to fall, she says, but there also need to be others who challenge and speak up when those flaws affect other people.

Brown added that the movement is bigger than one person, and that people should remember that the purpose of the cause is more important than the leader’s shortcomings.

The performance was emotionally gripping and eye-opening. During my elementary years, Dr. King was a hero and martyr who did no wrong and worked to change race relations in 1960’s America. As I grew older, he became a very flawed man – one my upbringing trained me to be disappointed in. But this performance changed the way I see Dr. Martin Luther King Jr. today. He is human – a human with a soul – who risked sharing the most private aspects of his life for the greater good of his people.