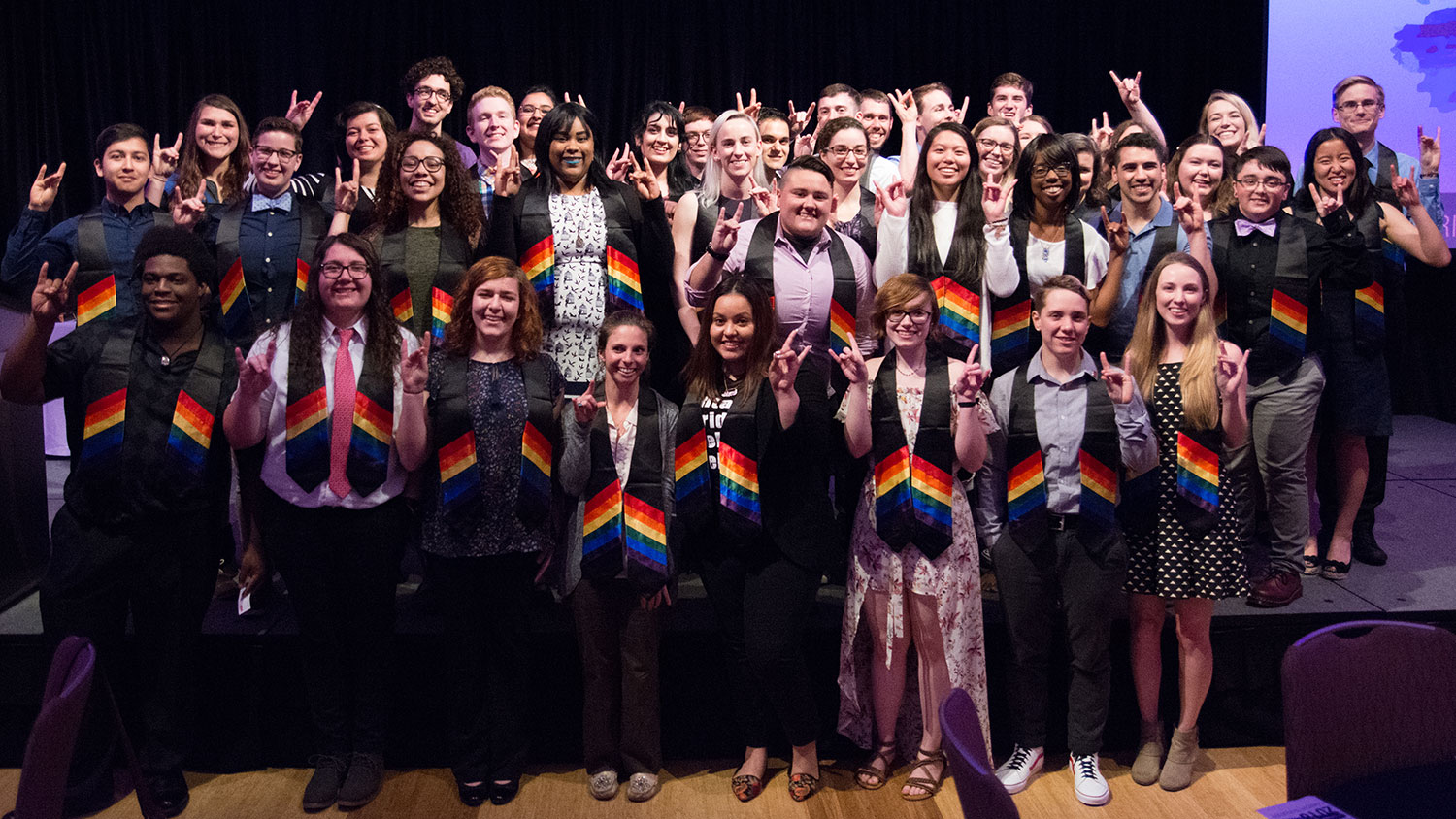 The GLBT Center’s annual Lavender Graduation, the first of five year-end celebrations hosted by the Office for Institutional Equity and Diversity, filled the Piedmont-Mountains Ballroom of Talley Student Union on the evening of Tuesday, April 24, 2018.

This year’s ceremony, which marked the 10th anniversary year of NC State’s GLBT Center, included opening remarks from Preston Keith, assistant director of the GLBT Center, who organized the event. Following Keith, incoming GLBT Community Alliance (GLBTCA) president Anne Elkins introduced alumna Kayla Overdiep, who gave the alumni address. Overdiep, who is now a staff member in NC State’s College Advising Corps, spoke movingly about finding a home in the GLBT Center along with the support, affirmation and friendships that she needed to become successful while at NC State.

Taylor Pace, incoming GLBTCA vice president, introduced Nury Castro, who gave the graduate address. Castro spoke about overcoming the difficulties of being excluded early in her college career to finding community and empowerment as she graduates with a master’s degree in public administration.

Noah Riley, a junior majoring in genetics, received The Thomas H. Stafford award, which recognizes a student who has demonstrated service to the GLBT community through peer education, peer mentoring, community building and/or community outreach or service.

Chaniqua Simpson, a Ph.D. student in sociology and anthropology whose work focuses on the sexual politics in Black resistance movements, received the Evelyn Q. Reiman Award, which recognizes a student who has worked to increase awareness about social justice issues, identify strategies for enacting change, engage peers in social justice activism and/or foster collaboration across communities to address campus or community climate concerns.

Following the awards, every graduate received a certificate and a rainbow tassel and stole to wear at university commencement.

Renee Wells, GLBT Center director, closed the ceremony with highlights from the year, which included the center’s 10th-anniversary gala, celebrated earlier this spring; many new workshops and programs attended by numerous faculty, staff and students as both facilitators and participants; the growing GLBT Advocate program; and a pledge to continue fighting on behalf of NC State’s GLBT community.

“Lavender Graduation provides an opportunity to honor students’ accomplishments and contributions during their time on campus, affirm their identities and their membership in the community, and provide a space for students to speak their truths. Part of what Lavender Graduation does is acknowledge the challenges GLBT students face. While this allows the campus community to affirm the students’ resilience, it also enables us to take a critical look at the barriers that still exist for GLBT students and what we can be doing to eliminate those barriers,” Wells stated.

The Office for Institutional Equity and Diversity coordinates the following year-end events:

All of these events are open to the NC State community. Contact OIED to find out how you can get involved.