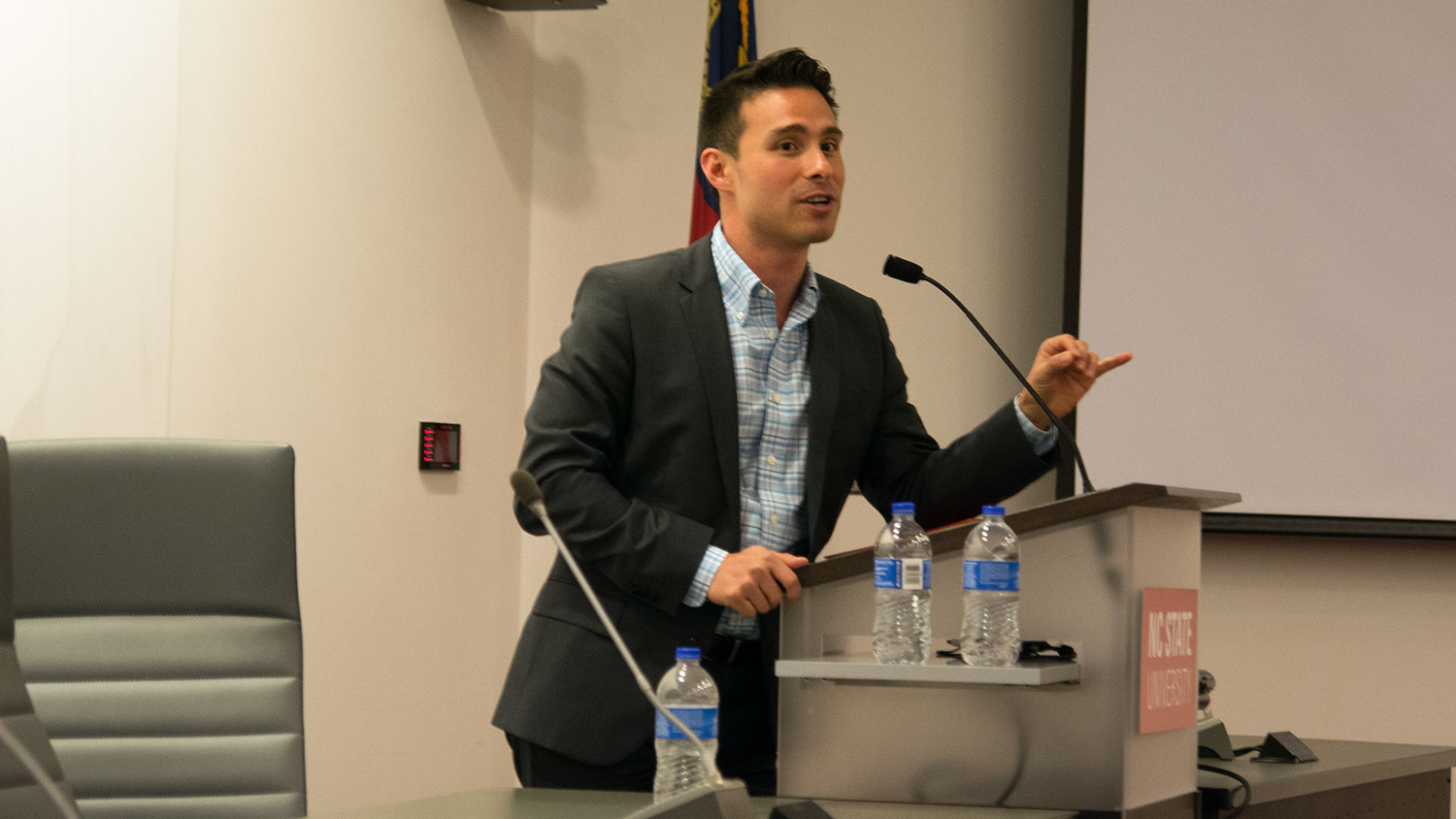 For Sexual Assault Awareness Month (SAAM), the Women’s Center brought Pierre Berastain to campus for a workshop, “Unpacking Culture in the Context of Sexual Assault, Intimate Partner Violence and Stalking,” and keynote address, “The Demons in My Sleep: Sexual Assault, the DREAM Act and Uncertainty,” both held on April 17, 2018 in Talley Student Union.

Berastain’s life reads like a classic American success story except for circumstances that make it more of an epic journey with some nearly crushing setbacks along the way.

In 1998, Berastain’s parents immigrated to the U.S. due to the economic crisis in Peru. They had been successful professionals with university degrees but had to start from scratch after arriving in Texas. His father had owned a company in Peru but now worked for a moving company. His mother had been a television producer but now worked as a babysitter.

Meanwhile, Berastain and his sister learned English and began their lives in the U.S. Targeting the best neighborhood schools and excelling in his studies, Berastain navigated so well that he was accepted to Harvard twice, graduating with a major in social anthropology, a minor in ethnic studies and a certificate in language proficiency in Portuguese, then going on to earn a Master of Divinity from Harvard Divinity School with a concentration on restorative justice, gender violence and Christianity.

During his remarks, Berastain clarified that while two degrees from Harvard may seem impressive and desirable, pursuing a master’s degree was less of a choice than an imperative; as an undocumented immigrant with no social security number, he could not work, but he could attend school.

In one of his blog entries for the Huffington Post from 2012, Berastain wrote, “While both of my parents are far below the poverty line, I enjoy the comforts of studying at the prestigious ivory tower that is Harvard. The guilt consumes me every night.”

Berastain stated that being undocumented has caused him constant anxiety, but another major event also shaped his life and work. As a first-year student at Harvard, he survived a sexual assault that, as a gay man, caused confusion and uncertainty.

From the immediate aftermath, when he grappled with describing the events in English, which did not allow him to express himself in the same way he would have in his native Spanish, to the fact that cultural differences and experiences did not make him as receptive to mental health services as he is today, Berastain described how even the trauma-informed service providers at Harvard were ill-prepared for non-mainstream cases such as his.

Adding to the difficulty, DACA (the Deferred Action for Childhood Arrivals immigration policy announced by President Obama in 2012) was not yet well-known and Berastain was not fully aware of the protections it conferred. He also had trouble telling his parents about the assault because he didn’t want to worry them, citing this as a common issue with children of immigrants who do not want to burden their struggling families.

Despite the difficulties he had to overcome, Berastain has emerged as a social justice activist on many fronts. He has become a national figure at speaking events, particularly at universities, noting that he relies on students for the most progressive discussions. Currently, he works for Casa de Esperanza: National Latin@ Network and has held positions at the Massachusetts Restorative Justice Collaborative, Renewal House and the Massachusetts Domestic Violence Coalition.

For survivors of sexual assault, Berastain notes challenges will vary for each person, but all must work to reclaim agency and authorship of their own lives, stating, “The reality is that for many, it will be a lifelong journey with ups and downs.” There may be triggers and setbacks to overcome, as well as cultural differences in how they process trauma.

For supporters and advocates, he states that we must not turn subjects into objects; we must turn it back around and listen.

The more you know, the more likely you are to push for change, particularly to diminish the unintended consequences of systems that cause further victimization of marginalized communities.

Concentrate on impact, not intent. Harm can be caused knowingly or unknowingly with equally detrimental effects.

When someone makes a harmful comment, do not allow it. If you don’t have the energy or ability to respond, change the topic and address it in other ways.

Berastain noted that progress has been made due to more widespread knowledge of the difficulties of undocumented students. For example, universities such as Harvard now acknowledge that even the most generous financial aid might not help if it includes a work-study requirement, due to undocumented students’ inability to work without a social security number. For these students, the work requirement might now be waived and aid increased. In the past, an unintended consequence of this problem might have been a student working as an escort or enduring other risky scenarios.

Another observation is that an undocumented immigrant might not be able to work for an employer but could start a business.

In response to a question about his views about the termination of DACA, Berastain responded that he has met with members of Congress and spoken with many people about it, including some who are deeply affected, emotionally distraught and even suicidal.

However, he continues his work and wants to contribute to this country because it has been transformative for him. He states that he believes the U.S. wants to make progress, and that he clings to this hope for his own sanity.

Until this happens, Berastain believes we all must work to raise awareness and advocate for change.