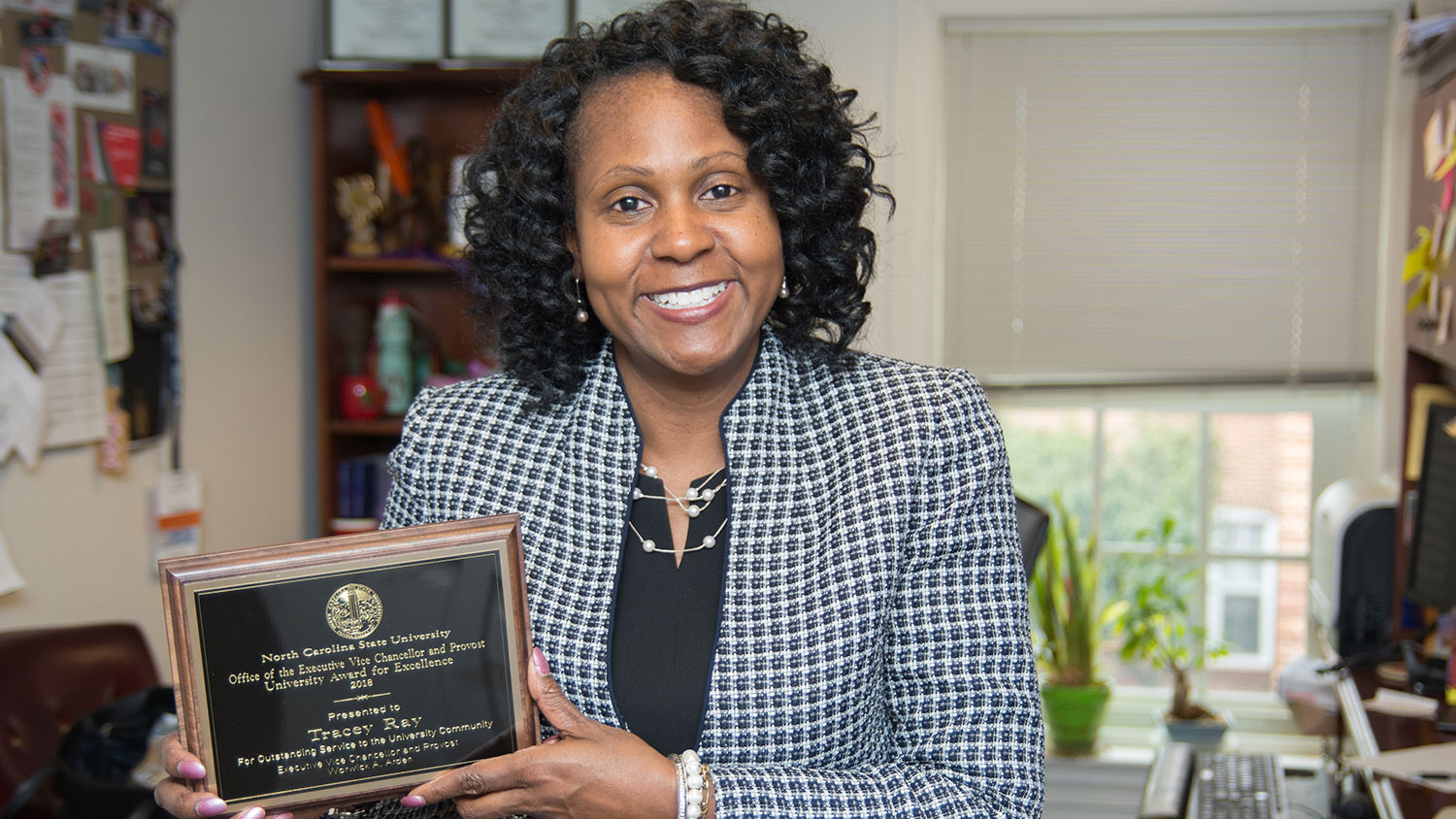 At a reception for nominees held in the Ballroom of Talley Student Union on Wednesday, March 21, 2018, Ray was recognized as one of five recipients and the sole EHRA winner out of a field of 17 nominees. All nominees received a framed certificate. Winners received an engraved plaque from Provost Arden as well as a small monetary award and eight hours of leave.

Ray has been a staff member in the Office for Institutional Equity and Diversity since its formation in 2011. Prior to that, she earned three degrees from NC State and served as the director of Multicultural Student Affairs for ten years, managing programs and services related to African American, Native American and Hispanic student affairs. Notable achievements during her tenure in MSA were the implementation of programs to promote the academic success, retention and graduation of students from underrepresented groups, many of which still continue today.

Ray’s nomination stated, “While in MSA, Tracey established a reputation for being an engaging and impassioned speaker at campus programs, a tireless organizer of events to benefit many different groups of students and a constant advocate for diversity and inclusion on campus. Tracey’s door was always open to the countless NC State students she has personally mentored and guided during workdays, into the evenings and at community events. It has never been unusual to see Tracey on campus well into the evening hours, supporting student activities as an organizer, leader and catalyst. She has been the advisor for the Society of African American Culture (SAAC), NC State’s oldest African American student organization, for 19 years. Personally mentoring and teaching students for nearly two decades has been one of Tracey’s exceptional strengths.”

In addition to her administrative responsibilities, Ray has taught continuously for over a decade as a faculty member in the Department of Counselor Education, Curriculum and Instruction, the Africana Studies Program and the Department of Psychology.

In 2011, she began serving as assistant vice provost for student diversity in the Office for Institutional Equity and Diversity (OIED). In this position, her responsibilities grew to encompass the entire campus with initiatives such as administering climate surveys of all undergraduate and graduate students, faculty and staff, convening and/or representing the office on university-wide diversity councils and committees for many different populations, leading major programming efforts such as the annual Diversity Education Week and campus Diversity Dialogues, serving on a task force to identify high-impact practices, spearheading interfaith initiatives such as the campus spirituality study, working to establish prayer and meditation spaces in each area of campus, working to achieve NC State’s military-friendly designation through the support of military-affiliated students and staff with the new Military and Veterans Resource Center and Green Zone training program and collaborating with many organizations all over campus on a wide range of diversity initiatives.

Ray has been a primary diversity and inclusion consultant on campus and has served as a member of various university-wide task forces, councils and committees at every level, from project teams to councils at the chancellor’s level.

She has also been extremely active in her professional activities, presenting or participating recently at the American Association of Blacks in Higher Education Conference, American Council on Education’s National Women’s Leadership Forum, the National Association of Diversity Officers in Higher Education, National Student Leadership Convention and a long list of others, including Alpha Kappa Alpha Sorority, Inc.

In 2012, together with RaJade Berry-James, a faculty member in public administration, she co-chaired the national Social Equity Leadership Conference that brought hundreds of attendees to NC State. This was a massive undertaking executed without a hitch that led to accolades from the National Academy of Public Administration.

The Office for Institutional Equity and Diversity congratulates Tracey Ray and thanks her for over two decades of dedication and service to NC State.