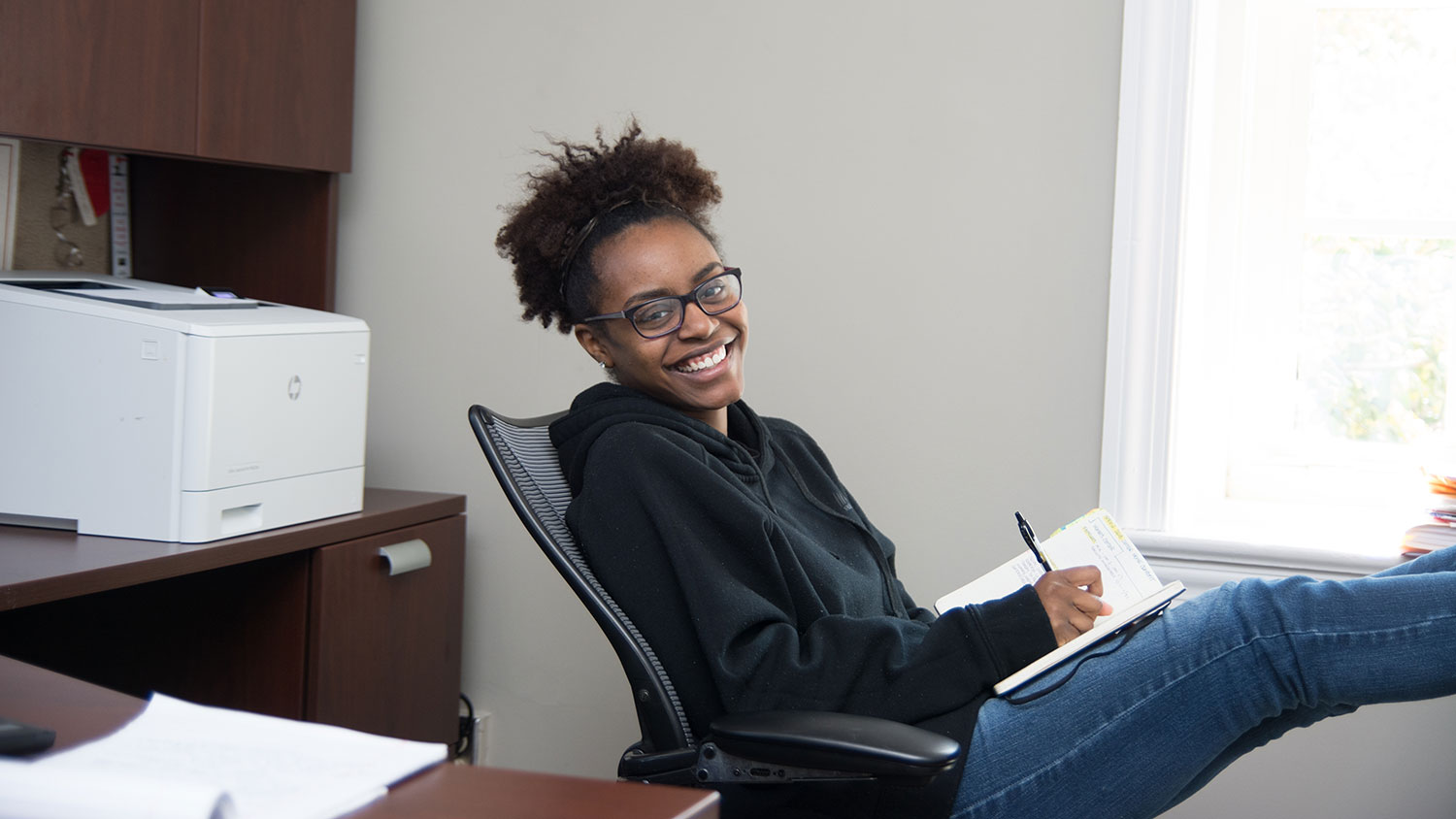 Austin Butler, communications intern in the Office for Institutional Equity and Diversity and a senior in science, technology and society, provides her thoughts on Black Panther (2018).

Black Panther is an enchanting film that follows the fictional narrative of T’Challa, the King of Wakanda. Beyond its spectacular visuals and exciting action scenes, the film addresses thought-provoking themes. These are my impressions of Black Panther as a young, educated Black woman.

Director Ryan Coogler is a 31-year-old Oakland, California native who studied at the University Of Southern California School of Cinematic Arts while living out of his car during his first semester. His first feature film, Fruitvale Station (2013), which also stars Michael B. Jordan, made more than $11,000,000 at the box office. Black Panther, which came to theaters on February 16, 2018, has already made over $500,000,000.

The film is adapted from the popular Marvel comic series. Writer Stan Lee and artist Jack Kirby created the character of Black Panther to address the lack of Black characters in comics. However, you don’t have to read the comics to be a fan of this movie. T’Challa comes to the throne following the assassination of his father and gains the hereditary title of Black Panther. Black Panther’s duty to protect Wakanda and its people includes keeping the country’s most precious ore, vibranium, a secret from the world. Vibranium not only drives the futuristic technology of Wakanda but also gives Black Panther his powers. (Shout out to all the Black girls in STEM – Shuri’s character is the mastermind behind a lot of Wakanda’s technological advances and T’Challa’s Black Panther suit. Check out the video about the science of Black Panther’s suit from NC State Engineering.)

T’Challa faces conflict when an old enemy challenges his claim to the throne and threatens to reveal the secrets of Wakanda to the world.

The Wakandans in the film speak isiXhosa, a South African language that uses clicks for consonants. The use of this African language pays homage to the traditional culture of Wakanda and adds a richness to the movie you wouldn’t get from the characters speaking only English. It’s also important to note the way Wakandans sound when speaking English in the film. In an interview with C|Net, Chadwick Boseman, who plays T’Challa, spoke on his choice to use an accent:

“Colonialism in Africa would have it that, in order to be a ruler, his education comes from Europe. I wanted to be completely sure that we didn’t convey that idea because that would be counter to everything that Wakanda is about. It’s supposed to be the most technologically advanced nation on the planet. If it’s supposed to not have been conquered – which means that advancement has happened without colonialism tainting it, poisoning the well of it, without stopping it or disrupting it – then there’s no way he would speak with a European accent.”

In addition to how the characters sound in the movie is the importance of how they look. The cast of Black Panther consists primarily of Black people. This aspect means a lot to Black people around the world who notice a lack of representation of themselves on the big screen. Representation is vital for younger and older audiences alike – it’s inspiring and gives the world a chance to see us how we truly are. From its depictions of rich complexions to Black hair textures, the film highlights and celebrates Blackness.

Watching the movie, I couldn’t shake a nostalgic feeling for a culture I don’t practice or fully connect with but feel strong allegiance to. I remember traveling to Senegal while in high school, thinking that I’d discover myself through completely emerging myself in the culture while learning about my ancestors. I left with such understanding and appreciation for the culture but still identifying more so with my American culture. Black Panther resurfaced the desire to find out more about my background.

Wakanda and its throne are protected by an all-woman military group called Dora Milaje, “the adored ones.” These women soldiers are strong and inspiring. Their loyalty to Wakanda is greater than any other loyalty, including that to a significant other. In watching the movie, I realized that this dedication is rarely attributed to female characters, so to see it is a refreshing surprise.

I took issue with Coogler’s choice to have Nakia’s character stay in Wakanda with T’Challa despite her previous expression of a desire to leave Wakanda to travel and change the world. This perpetuated the idea that a man’s job is more important than a woman’s – a cultural or societal expectation that is in dire need of reevaluation.

One of the biggest issues this film addressed was the role of more resourceful countries in relation to the rest of the world. Wakanda’s role in the world parallels the United States’ relationship to other countries and brings up the question: is it our duty to be a world protector or to simply take care of our own?

As opposing foils, the characters T’Challa and Erik relate to the opposing sides of contemporary issues. At the end of the day, both sides have the same end goal, but different ideas of ways to achieve this goal.

Black Panther is a great film. I recommend everyone see it, if not to enjoy the magic that is Blackness, then to evoke thought-provoking themes and questions. And if you are a Marvel fan, you’ll want to stay after the credits for the two post-credit scenes.