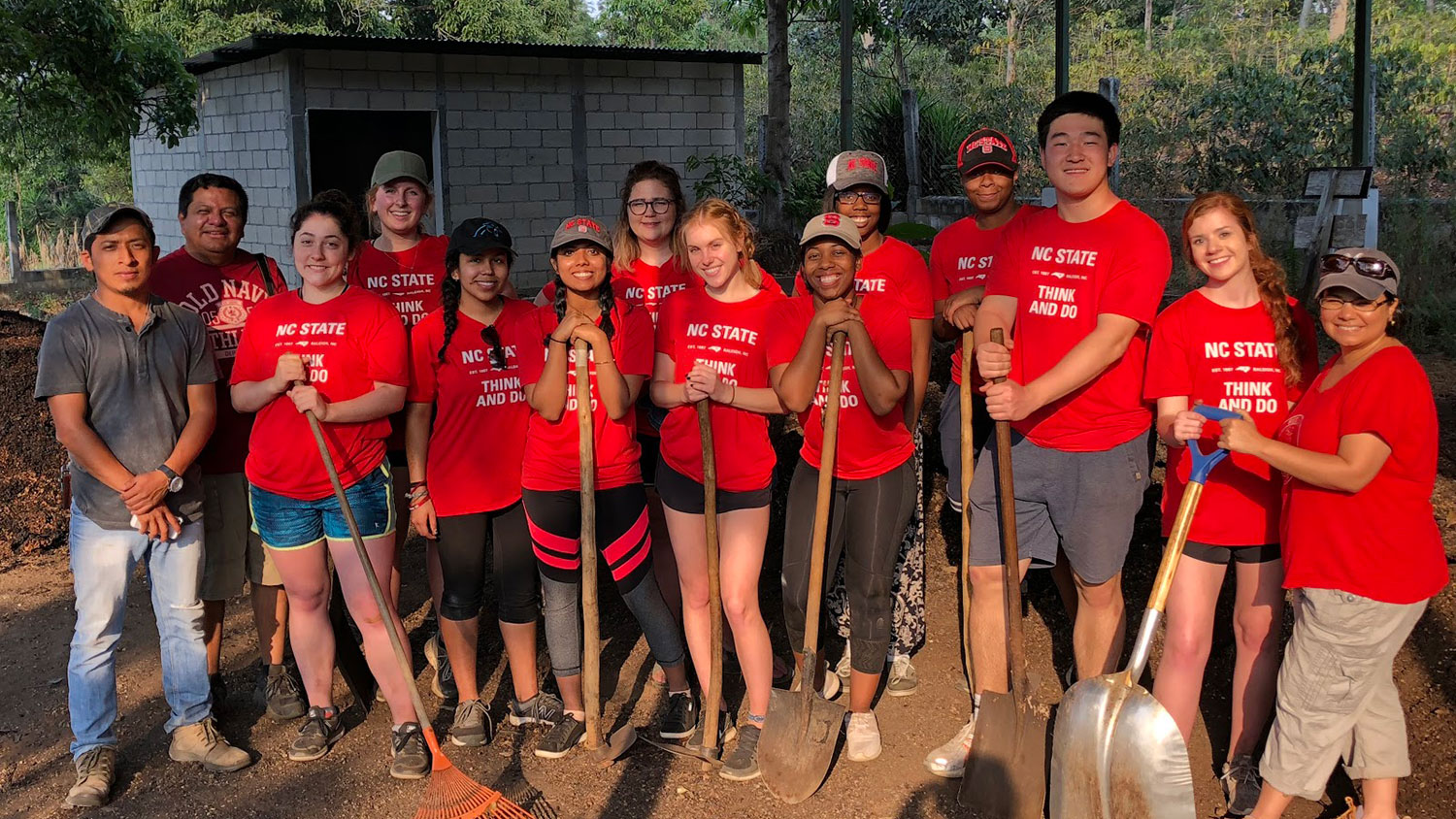 This year, staff from the Women’s Center, Multicultural Student Affairs and the GLBT Center served as advisors for ASB experiences crafted by student leaders to Guatemala, Costa Rica and San Francisco.

The NC State Women’s Center sponsors two Alternative Service Break trips, and each year they are known to exceed expectations. This year, eleven students and one staff member traveled to Guatemala to explore gender and equity in the context of Guatemalan history, government, and present-day issues.

The ASB team conferenced with content experts on the ground who are working to evoke change and shed light on centuries of inequality and inequity that still affect Guatemala today. The team learned about the torrid history of Spanish conquest and colonization as well as the Armed Conflict that stripped Mayan people of their rights to the land, their way of life and life itself. Centuries ago, an uncountable number of Mayan people suffered murder, rape and captivity, and the effects still echo throughout the country today. Today, this translates into a young, impoverished nation rife with government corruption, displaced families, missing friends and family members and countless deaths. The genocide of Mayan people and their culture, as well as that of Guatemala has led to a country in which young people do not have equal access to education and in which the majority of the population is under age 30.

Mario Rodriguez Acosta from the Guatemalan Department of Education stated, “We have a human problem,” citing that over two million children do not have go to school and over 900,000 of those children, aged 10-18 years, have to work to support their families. In rural and indigenous areas, the age is much younger. “A country that does not educate will not develop, and this phenomenon is affecting more girls, who are also targets for sexual abuse and rape,” said Betty Carrera, from the CEDEPCA Women’s Ministry. Rodriguez Acosta echoed this, stating, “Being a girl is worse than being poor and indigenous” in Guatemala.

The ASB team attended workshops and lectures by field experts and engaged in exploring artifacts of Mayan and Guatemalan life, including the Mayan ruins and Casa de Historia, and engaged with locals, such as the displaced women of Corazon de Mujer (Heart of the Woman) and with host families.

Participants saw links between the conquest of the Mayans and America’s own history of conquest and colonization of Native and African people as well as that of other marginalized populations. The team paid homage to the 56 girls who died or were injured during the fire at a state-run Guatemalan youth shelter last year and marched among citizens from all over Guatemala including indigenous, trans, Black, American, queer and others during the International Women’s Day march. Visit the Women’s Center to learn more about this trip and find out how you can engage in intersectional work that aims to loosen the global shackles of a culture of machismo and international patriarchy. The Alternative Service Break experience to Costa Rica focuses on all aspects of sustainability including the environment, society and economy while participants engage in both direct and indirect service. This year’s group met and learned from people who upcycle recycled materials into crafts such as change purses. The team also met local dance instructors and received bachata and zumba lessons.

The first part of the trip ended with participants exploring sustainability’s impact by visiting EARTH University, one of the globe’s most sustainable universities, as well as experiencing ecotourism by being completely immersed in the local culture. We learned how the college cultivates medicinal plant gardens, grows and sells bananas to Whole Foods and teaches scholars to bring back knowledge to help their homes. During the second half of the trip, students had the opportunity to experience Costa Rican culture while working on sustainable service projects with Globe Aware, a nonprofit organization that develops international volunteer programs intended to promote cultural awareness and sustainability. The team worked on helping to build a foundation for a community center. All of the team’s meals were hosted in the homes of the neighboring families, building real connections to Costa Rica. The GLBT Center’s Alternative Service Break trip to San Francisco gives students the opportunity to think critically about how identity and social justice are related. From the moment they knew they were chosen for the San Francisco trip, team members started analyzing their own social position and privilege to prepare for the challenging conversations about intersecting social inequities they would be encountering in San Francisco.

The ASB team took this opportunity to learn about the history of the HIV/AIDS epidemic, grassroots activism across the city and multi-strategy responses to social issues that meet people where they are, a hallmark of social justice work.

Students began their spring break by watching The Times of Harvey Milk in preparation for visiting The Castro, San Francisco’s historic GLBT district. The Castro is home to the GLBT History Museum, which the team visited their first day in the city. The GLBT History Museum educated the team about the power of preserving individual and community history to later tell a story and relate current events to past challenges, such as violence faced by the GLBT community. A special exhibit featuring Angela Davis highlighted her dismissal from UCLA’s faculty due to her political involvement, the international liberation effort to “Free Angela” after her 1970 arrest (for conspiracy charges for which she was found innocent) and her later return to social activism and scholarship. Other service-learning sites, such as Swords to Plowshares and the San Francisco AIDS Foundation, showed the team how individuals facing life-altering challenges can find comprehensive support. At Swords to Plowshares, a veteran’s needs could be met at just one location, from transitional housing to issues with military discharge and benefits.

The team also visited a major community partner, Project Open Hand, that provides nutritious meals for the elderly and chronically ill. Other service sites included the San Francisco AIDS Foundation, for which the team packaged safer injection kits for a mobile syringe exchange site, and Larkin Youth Services, a resource for young people aged 12-24 who need a safe place to stay, learn and prepare for employment.

Each agency the team visited shared how their work relates to intersecting social justice issues, and the team came home with a new sense of how NC State, Raleigh and North Carolina can move forward to protect the most vulnerable communities who experience multiple types of oppression. At the end of the trip, students completed the sentence, “I will engage others in an active role to combat systems of oppression by…”

Here are some of their responses: