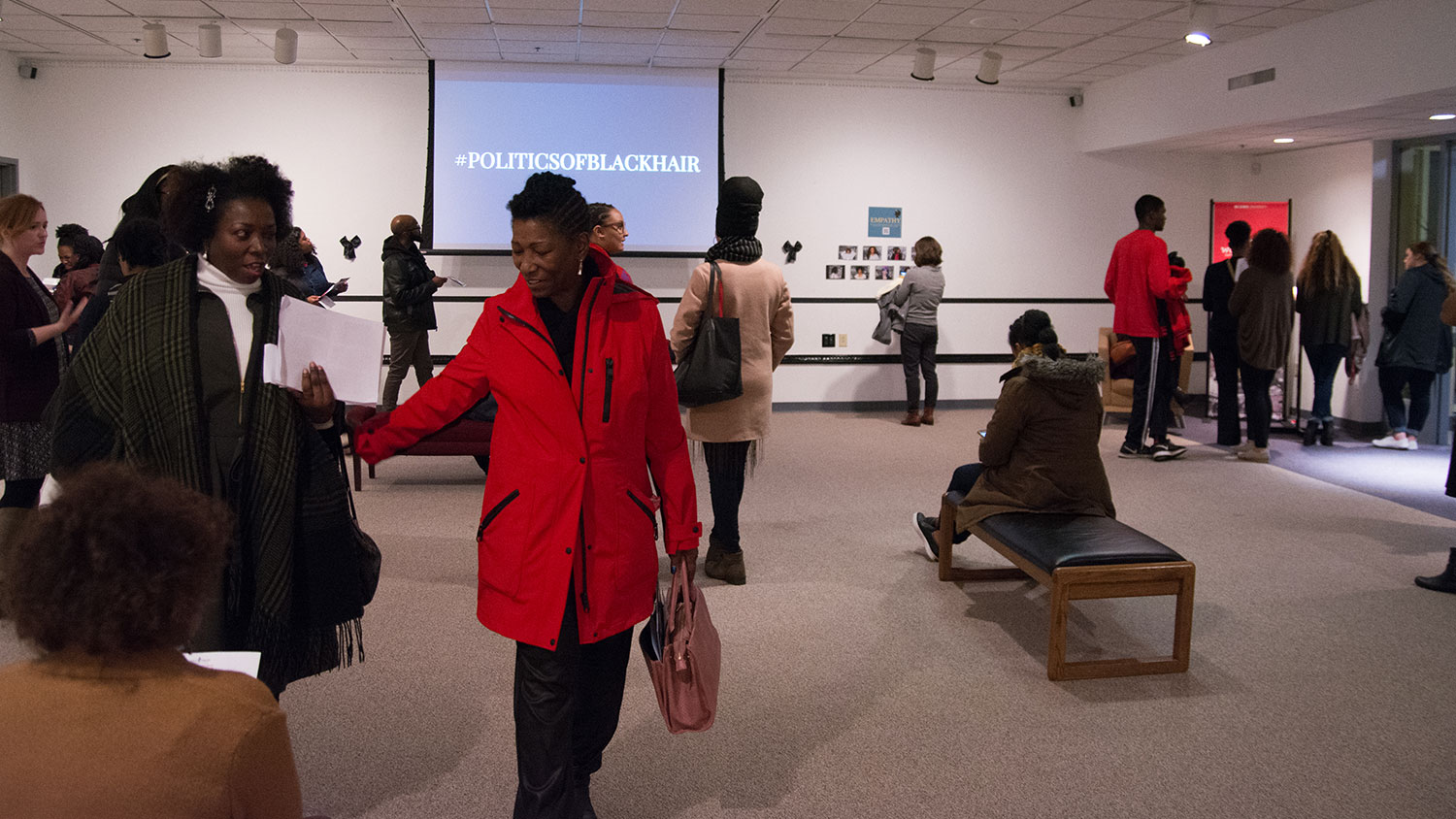 On Tuesday, February 13, 2018 the centers invited NC State students, faculty, staff and the public to celebrate its opening reception. Before the start of the event, tables of people made conversation while music played. Others smiled as they read the hair stories that accompanied the framed photos of PBH participants. “It’s been an emotional journey,” said NC State LIVE Director Sharon Moore on reading the stories in the exhibit.

“Our hair is a visual representation of our Blackness and how we manifest all of our glory,” said Angela Gay, assistant director of the Women’s Center. Despite this manifestation, wearing natural Black hair has often been considered unprofessional. Black hair is a symbol of nonconformity and resistance toward the expectation to assimilate. Last year in Massachusetts, twins Deanna and Mya Cook faced repercussions for wearing an African braided hairstyle to school. According to The Washington Post, the girls were told that the braids were a “uniform infraction” and “distracting.” The Cook sisters refused to remove their braids.

On September 15, 2016, the federal appeals court ruled that employers could ban dreadlocks at work. Gay said she remembers reading about the legislation on Facebook. “I thought it was a joke,” she said. “How can hair, something that is a part of us, a natural part of us, be discriminated against in such a way that denies us access to the resources that we need, like a job?”

“I thought, ‘I’m not cutting my hair, that’s not going to happen’,” said Gay. “But then there’s the question of what can we do? How do we fight back against this? We have to tell the stories, we have to talk about the fact that African American people are predominately the ones who wear dreadlocks.”

Gay said statistics support high unemployment rates among Black people but do not tell the story of what is actually happening in the lives of African Americans and other people of color with kinky, curly hair. She said this issue affects anyone whose hair doesn’t ascribe to the normal standards of what is acceptable or beautiful. Brown added that Black people restrict themselves as well – through an increasingly popular grading system that evaluates and categorizes the different textures of Black hair. “People see it as necessary information to understand what they can and cannot do with their hair,” she said. “But we (Black people) need to give our hair permission to be what it wants to be no matter how we wear it.”

You can check out the “Politics of Black Hair” stories in the NCSU Libraries Wolf Tales archive at go.ncsu.edu/wolftales. Also, be sure to pick up one of the featured books from “The Black Hair Booklist,” courtesy of the AACC Library and Media Room.

The Politics of Black Hair Participants

Each of the following participants appear in the photographs and text within the exhibit and received a crown pin as a gift for their participation. See also The Politics of Black Hair website for more participant information.

Photography for the exhibit was done by Britney Balmer, a second-year design major and intern in the Office for Institutional Equity and Diversity.