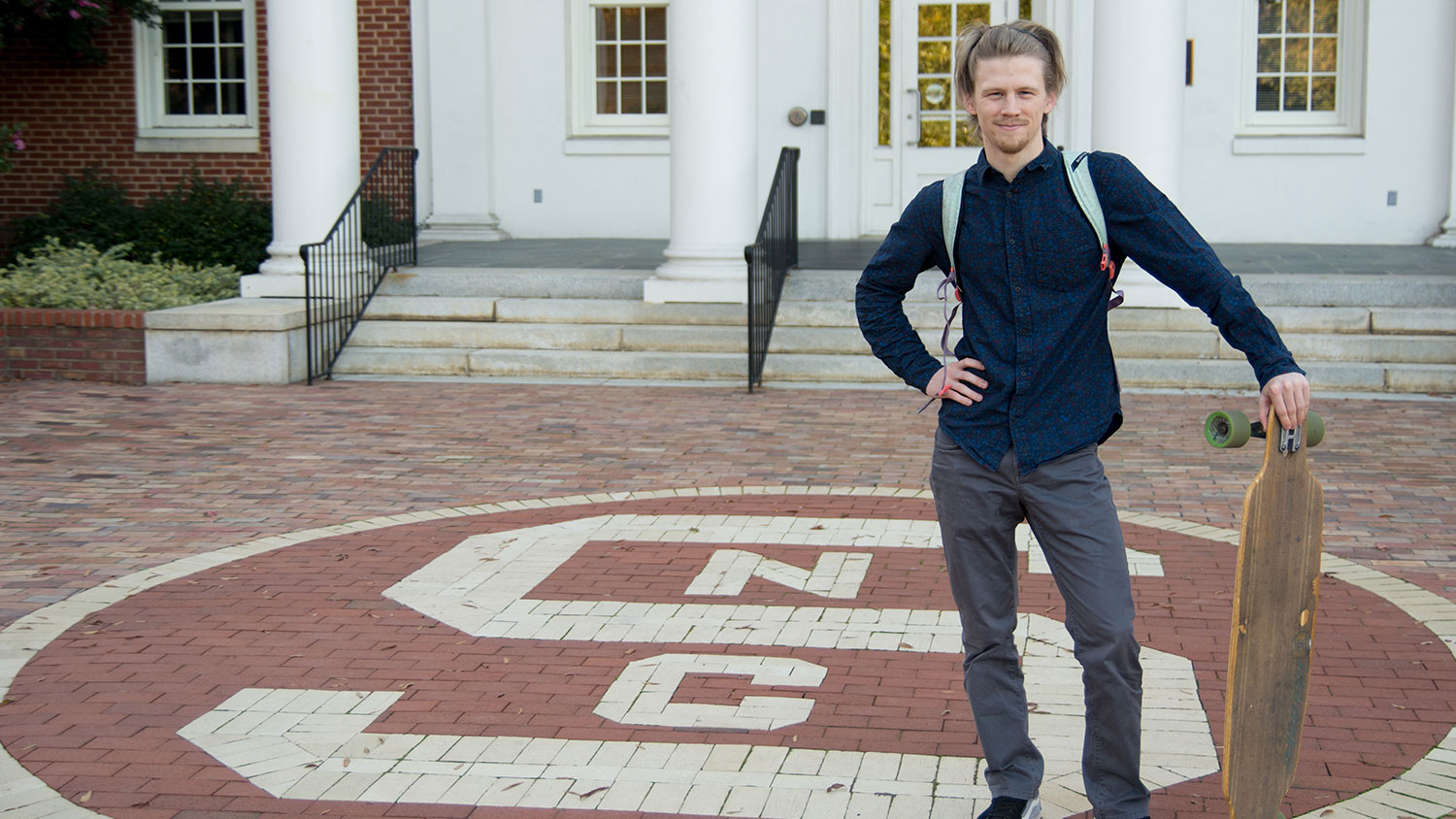 In mid-October, The Praeci Podcast gained some notice for entering a niche not currently occupied in the campus digital media scene. Offering long-form audio interviews, video and written news, the publication has started out strong with several timely topics of interest to the NC State and the local community.

Packaged in a clean, attractive interface that looks like the product of a well-funded professional organization, the website is actually the work of one person, NC State senior Carter Pape, a mathematics major from Durham with a healthy knowledge of computer science, web technology and media. Pape designs, creates and maintains the site with original content that he publishes biweekly. The opening tagline of his show is, in part, “independent digital media presenting NC State and Raleigh news succinctly and beautifully.” Care has been taken with every detail, right down to the music he composes for the podcasts.

Pape previously served as news editor at Technician and also created “Dialogue with the Technician,” the student publication’s first podcast series. His experience pays off as he probes the topic with well-researched and in-depth questions about Title IX and related laws. Kelley provides context and professional insights. Pape then asks the pressing question on everyone’s mind about what will change under new federal guidelines that back down some of the recommendations put forth during the Obama administration.

The second podcast and Praeci’s most popular post to date, titled, “‘Trump’s campaign to discredit the mainstream press’ with Jay Rosen,” records an October 25, 2017 NC State lecture by New York University’s Jay Rosen, professor of journalism. Pape provides a lead-in to the recording, excerpts introductory remarks by NC State political science professor Steven Greene and then provides the lecture in its entirety. Praeci also live streamed the event. The live stream is available on the website.

On November 13, 2017, Pape’s next topic, “Students first,” featured NC State senior administrators Vice Chancellor Tom Stafford (retired), Vice Chancellor and Dean Mike Mullen, Student Ombuds Roger Callanan (retired), Associate Vice Chancellor Evelyn Reiman (retired) and Provost and Executive Vice Chancellor Warwick Arden speaking about the Division of Academic and Student Affairs (DASA), including its history, units and personnel. Throughout the episode, Pape not only shows his interviewing chops but digs into NC State history to an extent that would satisfy even the most ardent NC State history buff, particularly during a segment that recounts the university’s 2011 strategic realignment that resulted in the current structure of DASA, the Office for International Affairs and the Office for Institutional Equity and Diversity.

Another highlight is hearing Arden authentically describe his feelings about NC State students. “I’m always blown away by our student body… the students at NC State – it’s not just about their own personal success – they truly want to make a difference.”

Most recently, “Free Speech and Multiculturalism,” published on November 21, 2017, featured Senior Director of Campus Community Centers and Bias Incident Response Team (BIRT) Coordinator Reggie Barnes speaking about the delicate balance of protecting free speech while supporting the mission of creating an inclusive campus environment, a topic that could not be more pertinent at this moment.

Regarding his participation in the podcast, Barnes says, “Free speech is a very sensitive topic in America and the most prevalent type of incident reported to BIRT. As a result, I am always very careful when considering interview invitations to talk about the work of the team and how it supports the campus. But throughout the process of scheduling the interview, then sitting down to talk, it became very clear that Carter really cares about issues of diversity, inclusion and social justice. It was also refreshing to provide clarity about external forces beyond our control that oftentimes make this work challenging.”

When asked in what directions the project will go in the future, Pape mentions his interest in the complexities of race, religion, gender and other protected classes, which may form the basis for a future episode. He frames himself as someone who likes to create discussion by providing a forum and medium in which his subjects can trust that their voices will be used to communicate in a direct way. He chooses topics based on what is current and interesting and perhaps not being talked about as much as it should.

His driving force is to reach NC State students who want a regular way to consume in-depth news with a focus on storytelling. Like many students, he isn’t sure what will happen in the long term, but he commits to continuing through the current academic year. He would love for Praeci to gain the attention of more students, but it’s clear that this passion project has been successful already, not just as a portfolio of his work but as an impressive publication in its own right.

Pape welcomes participation, feedback and interaction with listeners. He is currently seeking interview subjects who would like to share a first-hand personal experience or analytical perspectives relating to discrimination or privilege, especially relating to personal identity; anyone who would like to participate should submit the online interest form.

You can reach him at editor@praeci.com. You can also message him on Facebook or @PraeciNews on Twitter. Listen to episodes every Tuesday morning on WKNC 88.1 FM.