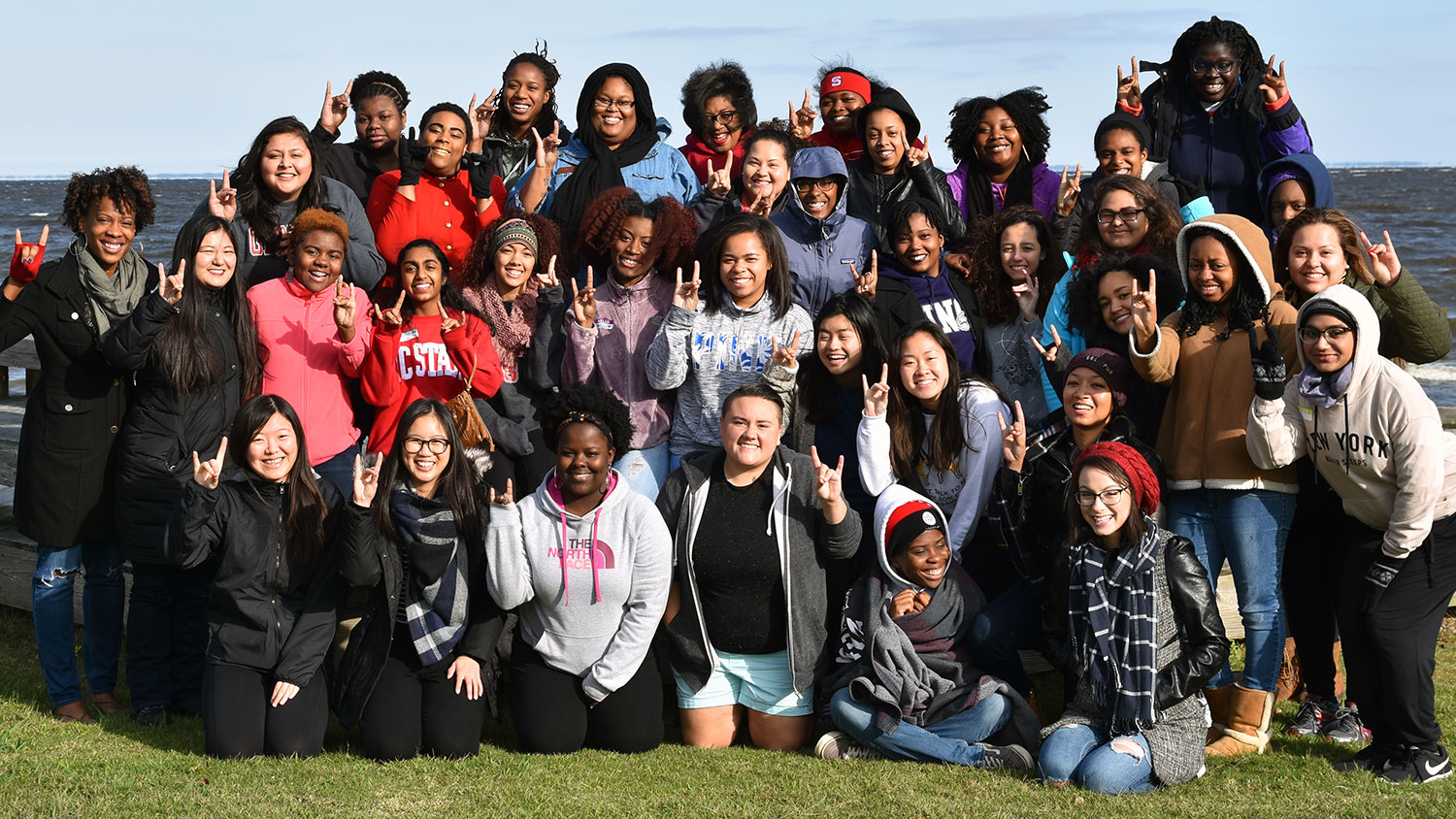 Forty-seven faculty, staff and students of color departed campus on Friday, November 10, 2017 to embark on NC State’s first Women of Color Retreat. The retreat, an inaugural program of the Women’s Center, moves beyond a diversity and inclusion rhetoric and engages in inclusive practices that claim space and reclaim the stories of experiences of women of color at NC State.

The retreat took place at the Eastern 4H Center, where students arrived eager to learn from and engage with one another in an effort to find connections within themselves and community with one another. Arriving students expressed a desire to find “clarity,” “renewal,” “chance,” “belonging,” “connection” “and “confidence” and upon leaving, students found they had gained much more.

The Women of Color Retreat hosted two keynote speakers, Natalie Bullock Brown, faculty lecturer in interdisciplinary studies at NC State and Chimi Boyd-Keyes of CBK Enterprises. Dynamic and engaging, both speakers moved students toward an intersectional analysis and deconstruction of the systems that lie within institutions as well as the internalized systems that lie within us as women of color. Throughout the night, students chose between various roundtable discussions for building solidarity, self-care, finding community, assessing values, body politics, moving beyond domestic violence, women of color in the workplace, deconstructing revolutionary politics and more. Students enjoyed the sleepover format. Engaged throughout the evening, students captured not only the information, but also a deep level of sharing with one another. As stated by a woman of color and scholar, “Being at a PWI as a WOC is rough. I can’t relate to most of the people in my classes. These roundtables refreshed me because I can’t receive this kind of closure from my classrooms and organizations at times.”

The Women of Color Retreat formed a collaborative space for women of color to support one another as they navigate spaces that often minoritize and ‘other’ them.

The learning outcomes of the retreat focused on gaining awareness, building community and increasing skills. Through the roundtables and keynote speakers, participants gained awareness of the historical legacies of women of color in higher education as well as the contemporary influences that play a part in how women of color are recognized today. As a result of attending the retreat, participants learned about Sarah Baartman and deconstructed the portrayal of women of color in the media, workplace and classroom. One participant wrote that the retreat “made me reflect on the history of WOC positions and how that affects how we interact today” while another student stated, “As a woman of color, I feel more empowered and ready to challenge the taught norms in society.”

As the retreat sought to promote cross-cultural sisterhood and intersectional awareness, many of the women stated that they felt more connected to one another and gained a richer understanding of cross-cultural sisterhood. One participant echoed this sentiment, saying, “I feel like I have a community on which to release all my troubles that will empathize with me and understand my struggle as a POC .” Another participant said, “I feel more connected to the NC State community by finding people like me and also making friends with people from different cultures.”

We asked students what they learned and how they planned to implement the skills they learned as a result of attending the retreat. Overall, students felt more equipped after attending the retreat, with one student stating, “ understand what colonized oppression is, and how we can unpack and dismantle that.” Another stated, “I feel more equipped now to be a part of NC state’s campus.” Students cited future action planning, implementing new coping strategies, goal setting, being more intentional and extending the connections made.

Historical context is important as we seek to explore the intersection of systems of oppression and how they interact with our individual identities. The inclusion of an Asian man in 1898 did not mean inclusion for other people of color or women of color. The university opened its doors to women in 1899 did not signify the beginning of inclusion for women of color. Continuing on, the 1966 graduation of Norma Wright Garcia did not signify the inclusion of Latinx or Native students or women at NC State. While this is NC State’s history, it is not much different from the history of other predominantly and historically white institutions.

Why We Need a Space for Women of Color

Within higher education, women of color must be understood as pluralistic beings who hold a number of identities that are often marginalized, minoritized and ‘othered’ within systems that do not acknowledge their history of exclusion. When considering how systems operate within institutions, we must also consider what part of our students’ identities are being considered and what parts are being left out.

NC State is an institution that believes in ‘thinking and doing.’ The ability to think critically is essential to breaking down systems of oppression; however, those thoughts must also be put into action. Women and girls of color need a space where they are supported and where they can authentically show up to claim space as members who belong to the institution. The Women of Color Retreat created a space for this to happen. NC State prides itself on being an institution that focuses on diversity and inclusion, and the NC State Women’s Center believes it is our responsibility to live out the mission of NC State, promoting “an integrated approach to problem-solving that transforms lives and provides leadership for social, economic and technological development across North Carolina and around the world.” We do this by first recognizing that our women of color matter and are a part of our community and our social, economic and technological world.