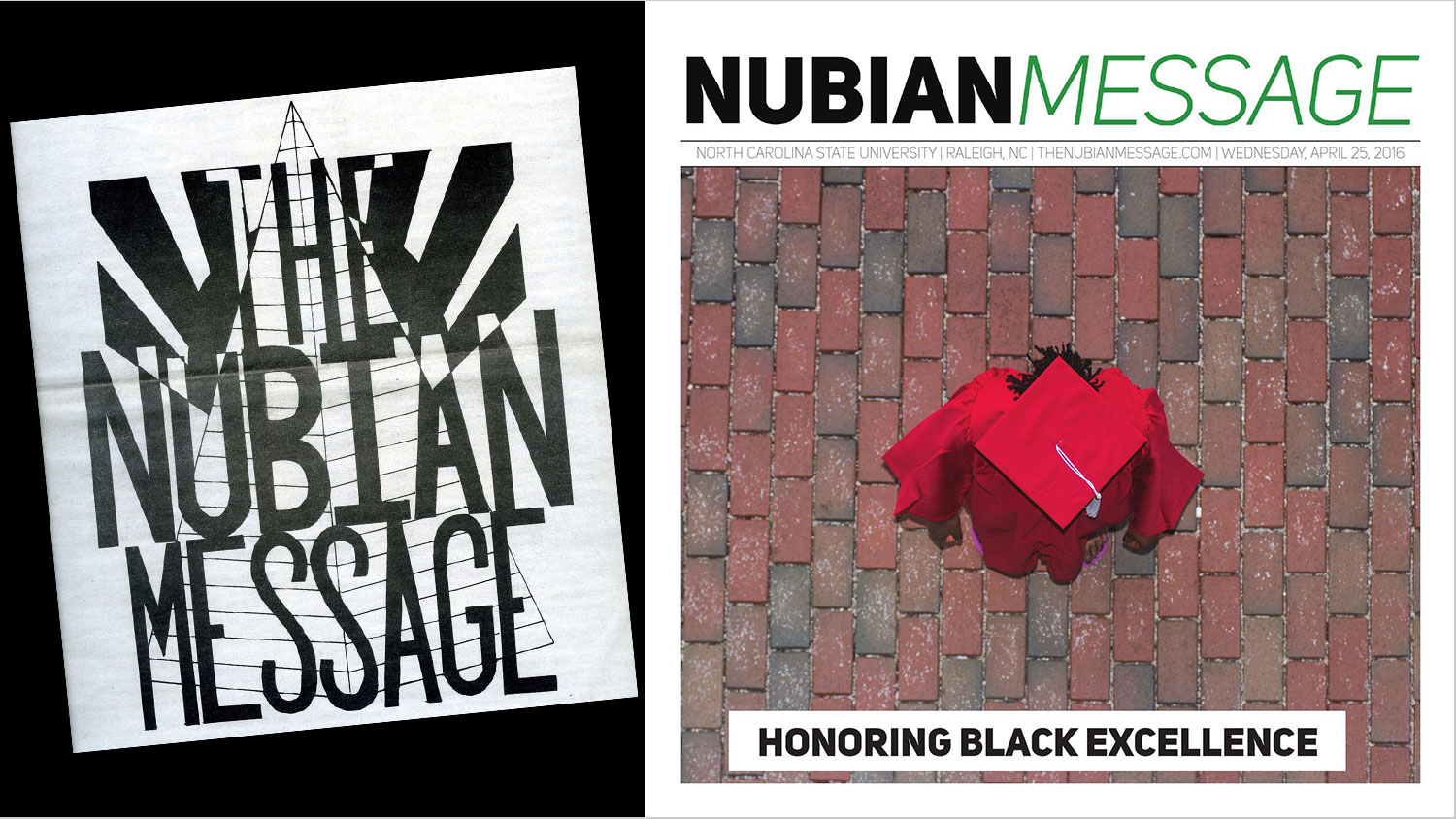 Representing the African-American voice in media at NC State, the Nubian Message will celebrate its 25th anniversary on November 30, 2017. Austin Butler interviewed Editor-In-Chief Anahzsa Jones, a senior in English with a concentration in creative writing from Brooklyn, New York, to find out how the publication plans to celebrate.

Representing the Voices of Many

“I rely very much on the people around me to make sure that we are an accurate representation of the African-American voice. The Nubian Message is about what is important from a community standpoint, and being plugged into the community is the most important way that we do that,” said Anahzsa Jones, the current editor-in-chief.

Tony Williams founded the Nubian Message in 1992. “The Nubian Message has been created to represent the African American community at NCSU totally, truthfully, and faithfully. In doing so, we shall cover every aspect of African-American life at NCSU,” he wrote in the publication’s first issue.

To commemorate its 25th anniversary, the publication will release a special 24-page issue, 16 pages more than its usual eight. The issue will focus on the history of the publication and honor all who have contributed to it, said Jones. Campus partners will take part in the celebration and the issue will highlight their support and congratulatory salutes. The African American Cultural Center Gallery will host a party to celebrate the publication as well.

“Trying to keep track of what’s going on with the issue and what’s going on with the party is a lot, but I’m glad to do it because The Nubian deserves it. To me, it’s almost taken on its own personality. The Nubian Message, to me – it’s like a person whom I love very dearly who means a lot to me. I really do love this paper and what it stands for – I can’t say that enough.”

The special issue will also include a timeline of the publication’s history at NC State.

Since its conception in 1992, the publication has grown to include multicultural voices on campus, said Jones. “We don’t want to alienate any communities. African Americans are 6% of NC State’s population, but we’re also one of the largest minorities, so that means Asian American/Pacific Islanders, Native Americans, Latinx groups – all of these people are underrepresented on our campus. So, at the Nubian Message, I feel like we have a responsibility to be the voice of not just the African American community, but to be multicultural.”

The Nubian Message has also shifted to become a more NC State-focused paper. In the past, the publication focused on everything from politics to pop culture, even outside of campus, but Student Media pushed to have it be more about NC State. While this is important, it can also be limiting, said Jones.

“There are certain things where it’s like, how do we tie this back to NC State, and if we can’t, does that mean that we don’t write about it or does that mean that there will be one thing that’s not going to be about NC State? What I would hate to happen is for the Nubian to lose its credibility as a reliable source of college news because we focus outside of NC State. Being the African-American paper, we sit in this really weird niche of yes, we are an NC State paper, but we are also an African-American paper. African American people are very clicked into their community wherever they are, so my life doesn’t stop in college. It’s not like we’re in this bubble where things outside don’t affect us. So, trying to find that balance is an ongoing process. We’ve sort of become a bubble and going forward that’s something I do want to change.”

Jones also hopes the paper will have increased community involvement and incorporate different cultures around campus even more with additions such as a fluent Spanish speaker and writer.

The Nubian Message doesn’t shy away from weighty topics and maintains a high standard of quality. The process for approaching stories of serious subject matter starts with a conversation, said Jones. While some issues hit close to home, the reporters at the Nubian learn to put their emotions aside to do their job: providing the community with information and representing the voice of the African American community.

Outside of her 1.5 years at the Nubian, Jones is a spoken word poet. Jones’ first article focused on a spoken word poem with a line that struck her about Martin Luther King, Jr. being the only black ‘king’ in our history books. “You don’t see other black leaders,” said Jones. Stephanie Tate, editor-in-chief at the time, directed Jones to talk to other people and see how they felt about the topic. Jones said this was her favorite article she’s written and the Nubian Message has provided her with a place to marry her passions.

“Jillian Smith, editor-in-chief when I first joined, and Stephanie Tate, who was the editor-in-chief last year, made it a very welcoming environment. They made me want to come back. Then I got absorbed into what the paper stands for. We are the voice of the African-American community; this is our purpose. To be a part of something that’s so much bigger than I keeps me coming back.”