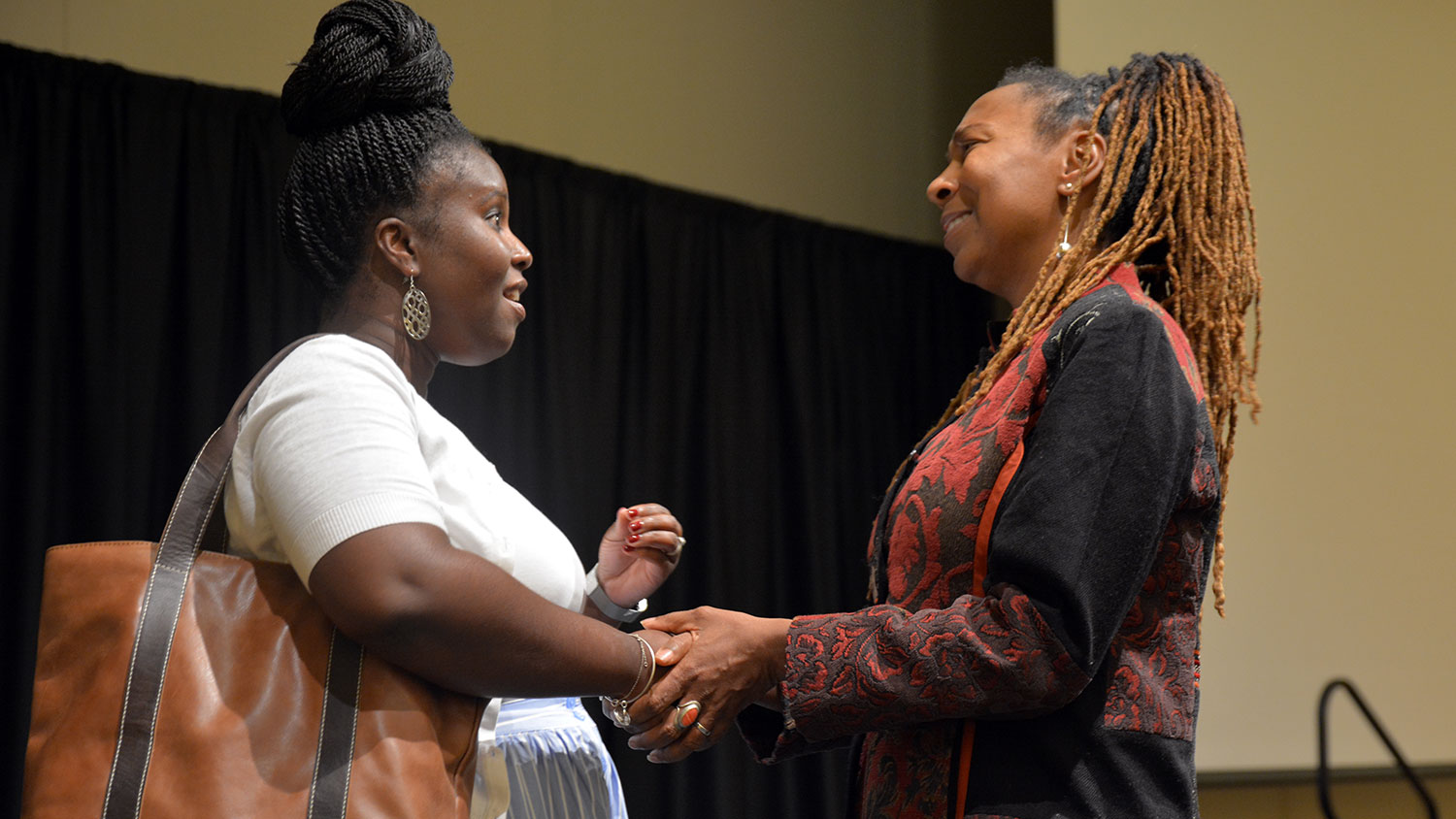 On Tuesday, April 4, 2017, Interdisciplinary Studies in partnership with Society of Afrikan American Culture hosted Kimberlé Crenshaw as the keynote speaker for the 47th Annual Pan-Afrikan Week celebration. Crenshaw is a leading activist, scholar and law professor at the University of California, Los Angeles and at Columbia University. Crenshaw is known for her research and work around Critical Race Theory and coined the term intersectionality to analyze the ways in which the narratives of women of color were left out of feminist discourse. Co-sponsored by the Office of the Executive Vice Chancellor and Provost, Dean’s Office of Humanities and Social Sciences, Growing Research on Women and Girls of Color, NC State Black Alumni Society, Women’s and Gender Studies, Women’s Center, Africana Studies, and the African American Cultural Center, the keynote address, “#SayHerName: The Urgency of Intersectionality,” challenged attendees to recognize the historical legacy of racism and sexism and how it operates institutionally and structurally. In her address, Crenshaw created a call to action urging attendees to recognize the pervasiveness of racism within our culture and empowered communities to stand against racial inequality as it persists in our society. “North Carolina is ground zero in political strife,” stated Crenshaw as she noted the recent arguments surrounding the repeal of HB2 and North Carolina’s role in progressive social movements marred by its history of inequality and discrimination towards marginalized communities. In her critique of the ways in which racism operates institutionally, Crenshaw reminded participants of the role that institutions of higher education have played in racial inequality. Crenshaw stated, “What we fail to recognize is that the source of racial strife is embedded in knowledge-producing industry… You sit in at the site of your oppression.” Filled with historical narratives and anecdotes of her experiences at Harvard School of Law, Crenshaw highlighted the ways in which institutions of higher education often call for diversity but whose actions are often consistent with racial inequality. Crenshaw also raised awareness of the effects of the patriarchy as we strive towards inclusion. The voices, experiences and barriers faced by women, particularly women of color, have often been overlooked or subordinated to those of men. To illustrate this, Crenshaw asked the audience to stand as she stated the names of people who have been killed at the hands of police. The audience was instructed to remain standing until they heard names with whom they were unfamiliar. As she said names such as Eric Garner, Freddie Gray, Michael Brown, Walter Scott, and Tamir Rice, the audience remained standing. As she continued to names such as Janisha Fonville, Jessica Williams, Natasha McKenna, audience members began to sit until there were only five audience members standing. Crenshaw stated, “…as we work to end the racialized state violence on communities of color, we often erase the intersectional dimensions of the problem.”

In her final notes, Crenshaw urged the audience to fill the void, lift your voice and say her name. #SayHerName is a campaign founded by Crenshaw to call attention to the instances of police violence towards Black women. This call to action ensures that the stories and voices of Black women are integrated into the demands for justice, policy responses to police violence and media representation of victims of police brutality. In order to address the issues of inequality, we must make sure that we as a community are approaching it from an intersectional lens.

Preston Keith is assistant director of the GLBT Center.