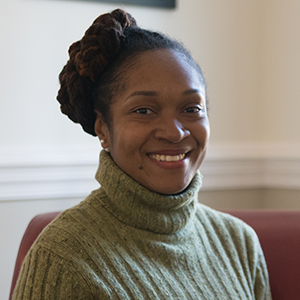 LaTonya Johnson is a master’s student in liberal studies with a concentration in social psychology who exemplifies giving back. Find out how she has worked to make a path for women, beginning with herself, many others at home and abroad, and now, her own young daughter.

LaTonya Johnson is originally from the Bronx, New York. Before coming to NC State to work on what will be her second master’s degree, she graduated from Bennett College in 2001 and then went on to earn a master’s in media studies at The New School in New York.

At the time, she was interested in writing skits for Saturday Night Live, but it never panned out, which in hindsight was a good thing, she notes, choosing instead to go abroad. “In 2010, I taught in Ghana for ten months and while I was there, I read a book titled Growing Up Illiterate: Learning from Inner-City Families by Catherine Dorsey-Gaines and Denny Taylor. I had an ‘aha’ moment. I thought about where I came from in the Bronx, and I knew I wanted to work with young black American females in the inner city. I aspire to empower and support young girls from the inner city, as the same was done for me. I am just a simple girl from the Bronx who was encouraged and challenged to dream beyond her confines. Who am I not to give back? I didn’t know if I should do counseling or social work but when I heard about the liberal studies program at NC State, I realized I could do exactly what I wanted and marry the different disciplines.”

Along with working on her master’s, Johnson is a council member at the E.S. King Village, where she lives with her four-year-old daughter. At E.S. King, she helps plan and execute events to help facilitate interactions among the residents and build community. She has also participated in the Women’s Center’s Read to L.E.A.D. program, which provides literacy enhancement, academic coaching and mentoring for K-12 students and fosters a strong sense of social justice.

When asked what she is most proud of accomplishing, Johnson was almost brought to tears as she responded, “Doing as well as I’ve done since coming to Raleigh with my daughter. I did not know how I was going to figure it out. She was two turning three at the time, and now she is four going on five, but I figured it out. My greatest accomplishment isn’t a degree, it isn’t an accolade, it’s that I figured it out.”

LaTonya’s advice for other students trying to “figure it out” is to network and stay focused. She added one more lasting piece of advice, “Don’t ever strive for perfection — there are no lessons in perfection. Every mistake is a chance to grow. Besides, perfection is boring!”

For those interested in learning more about African women, a topic about which Johnson is passionate, she recommends African Women Writing Resistance: an Anthology of Contemporary Voices, (University of Wisconsin Press) a compilation by women in Africa and the diaspora.