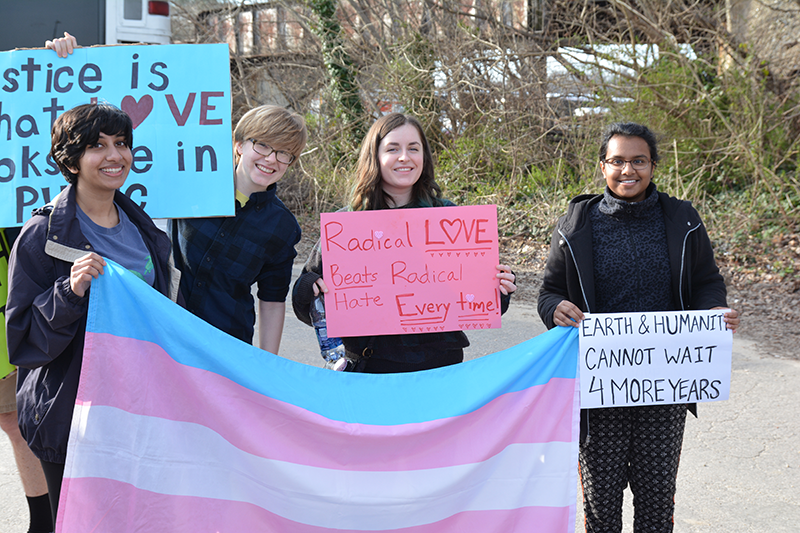 centered around current intersecting social justice issues encapsulated in the 14-Point People’s Agenda: education equity, voting rights, labor rights, closing the healthcare gap, police and criminal justice reform, environmental justice and racial justice. When asked what inspired them to wake up early and board a bus on a Saturday, one student stated, “I feel like I’m doing something good for the community and showing my beliefs.”

Over the last decade, this NAACP-coordinated event has grown to include immigration reform, reproductive justice, LGBTQ rights, police accountability and affordable education, among other social justice issues. One student commented, “HKonJ showed the importance of multiple issues and how they can all connect back to one another.” Keeping the current political climate in mind, many demonstrators carried signs referencing recent events, such as, “Nevertheless, she persisted,” “I stand with Planned Parenthood” and “Abandon the sinking ships of patriarchy and white supremacy.” Another student excitedly commented on the power and potential behind the mass demonstration: “I am looking forward to a lot of different people from a lot of different backgrounds coming together and smashing the patriarchy for one thing, and also just generally using this really awesome system of democracy to fight back against things that we feel are unjust.” Under the slogan “Forward Together, Not One Step Back,” HKonJ continues to provide space for the voices of those most marginalized by the policies and practices across our state. The pre-rally attendees heard from advocates speaking about their causes before the start of the march on the capitol. At the end of the seven blocks, the demonstrators gathered to hear about the experiences of those impacted by the lack of adequate education funding, the healthcare coverage gap, the marginalization of youth and elders, the devaluing of workers and the erosion of the rights of immigrants, undocumented or not. The executive order regarding travel from majority-Muslim countries was also on the minds of the students and other demonstrators. There were signs saying, “Treating refugees as the problem IS the problem,” and “#MuslimLivesMatter.” One of the students mentioned, “I’m really proud of what everyone in America is doing right now because it would be so easy for us to just sit back and say, ‘Oh, well, this is happening. That sucks, too bad.’ You know it’s almost reminiscent of that Holocaust poem… ‘First they came for… and I did not speak out because I was not whoever.’ And now I think it’s, ‘First they came for the Muslims and I said, ‘Not gonna happen.’” Other students appreciated the chance to start “critically evaluating intersectional movement and how they can better serve all people.” Along these lines, one student commented, “It was great to see so many different issues represented by so many people. However it was clear to see the ways in that we aren’t working together effectively for intersectional justice. There were many signs and chants that negated the experiences of certain identities and perpetuated the existing systems that allow racism, cissexism and other systemic oppression to thrive, such as colonialism and a strictly binary view of gender. It gives me hope to see so many causes represented, and I hope that we can continue to have the necessary conversations around how to advocate for justice in an intersectional and critically inclusive way.”

Andy DeRoin is the program coordinator in the GLBT Center.