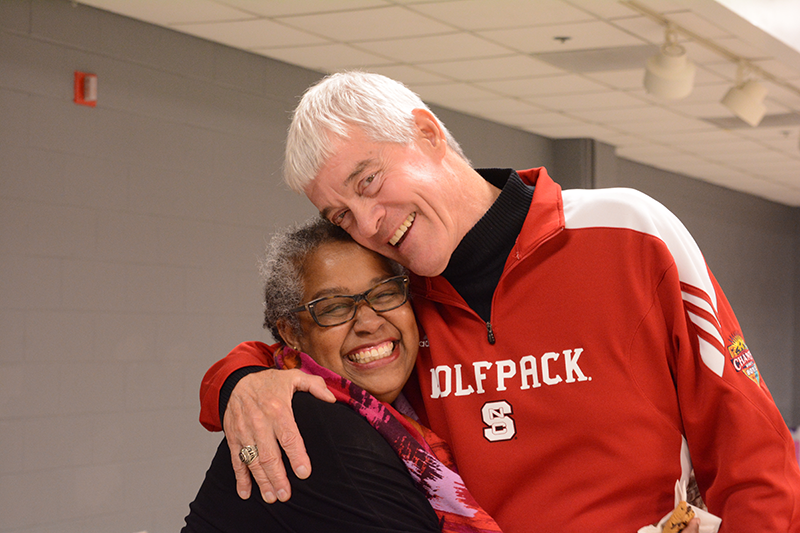 As many of you know by now, Toni Harris Thorpe is retiring from NC State effective December 16, 2016. I’d like to take a moment of personal privilege to say how extraordinarily blessed I’ve been having had the opportunity to work with Toni during her last year serving the NC State community, especially the student body. I have treasured all of our time together! Celebrating the 25th anniversary of the African American Cultural Center (AACC) during her last year on campus has been extraordinary. It is because of Toni’s commitment to the legacy of Dr. Augustus Witherspoon and Dr. Lawrence Clark that the AACC team has accomplished a number of milestones. The power of her institutional memory has been incredibly beneficial in making certain that the mission of the Cultural Center comes to fruition. During her fifteen years in the Center, Toni has kept it afloat during various leadership transitions and developed and implemented unique programs that will exist long after she has left campus, such as Harambee, the Blacks in Wax Live Museum, the Red, White and Black Walk, What’s on the Table discussions, and the Martin Luther King, Jr., Campus Commemoration. Scholars, activists, thought leaders, entertainers and scientists have visited NC State as a result of Toni’s efforts. Additionally, she has received numerous recognitions, such as the university’s Award of Excellence, Outstanding Woman of the Year, several certificates of appreciation and the Thorpe Cup, given in her honor every Homecoming.

Yet, her pride, joy and greatest legacy has been student engagement. “Mama Thorpe is one of the most influential people on this campus. She has helped me immensely to get acclimated to campus and find my place in the university. It’s hard to believe she won’t be around the Center my senior year, but the knowledge and wisdom she’s passed down to all her students will always carry her legacy.” Stated Matthew Wright, a junior in graphic design and AYA Ambassador.

Jordan Anderson, a junior in environmental technology and vice president of the AYA Ambassadors, states, “Mama Thorpe has been the continuation of the wisdom and guidance of Dr. Witherspoon and Dr. Clark’s legacies that students require in their experience at NC State to know who they are, whose they are, and where they’re going as young students on a busy college campus. She’s been the constant support in the AACC where you know that after a long day you can get a hug and feel loved. Without her truly authentic, personable personality and graceful spirit, many students would’ve been lost on, and possibly left, a campus that tends to treat them like second class citizens.” Thus, Toni displays the strongest example of intrusive advising known on NC State’s campus. She believes in tough love and demonstrates this on a daily basis to and for students. Tsharre Sanders, a 2016 NC State graduate, sums it like this, “Mama Thorpe has been a phenomenal resource and support system during my time at NC State as an undergraduate student, and even as I transitioned into my professional role. I have grown in so many ways as a woman, in my faith, in my cultural understanding and awareness, as a leader, as a professional and in many other capacities, and I give credit to Mama for empowering me to believe in myself and for being a great mentor.” Toni expects students to matriculate and graduate in four years. If students experience difficulty in doing so, after a stern talking to, she directs them to the appropriate services and people needed to help them get back on track.

Moreover, developing and maintaining campus partnerships is one of Toni’s trademark abilities. The Center has benefited mightily from collaborations with the Women’s Center, NC State Libraries, The Scholars Program, College of Education, College of Design, College of Textiles, Africana Studies and various units in the Division of Academic and Student Affairs (DASA). Jennifer Castillo, associate director of the Women’s Center, offered these remarks. “I am so thankful to have had the privilege to work with and learn from Toni. Her love for others radiates through her everyday actions – and is especially evident in how she lights up when talking/working with students! Through her words of encouragement and wisdom, programming gifts and one-of-a-kind hugs, Toni has helped foster a sense of community for those who weren’t always sure if/where they belonged at NC State and truly made NC State a better place for all.” Marion Fragola, director of program planning and outreach at NCSU Libraries, who collaborated with Toni and the late Dr. Walter Jackson, professor of history, to develop the Red, White and Black Walk, offered the following, “Toni Thorpe is a true presence on campus. She cultivates deep connections with students, always letting them know that they are valued as individuals and scholars. As a colleague, Toni is a special gem: she combines high-level vision with precise attention to detail to deliver programs that leave participants challenged, enriched and engaged. I have been honored to work with her, and our campus has been indelibly strengthened by her career here at NC State.”

Sharon Moore, director of NC State LIVE, who hired Toni as a member of the Center Stage team 25 years ago, offers what many of us think about Toni on a daily basis. “Her generous spirit and unwavering high expectations of our young people have made all of us better people. If only the world could be raised by Mama Thorpe.”

So, here’s to Toni Thorpe… a woman whose smile is contagious, hugs are legendary, rendition of the Sankofa story will bring you to tears and whose commitment to the African American Cultural Center has increased the awareness of African American history and culture locally and nationally. We wish you a fabulous retirement! We will not say goodbye… instead, we say, one-by-one, “I am because you are.” (African proverb).

Frances Graham, I am because you are, retirement, Toni Thorpe