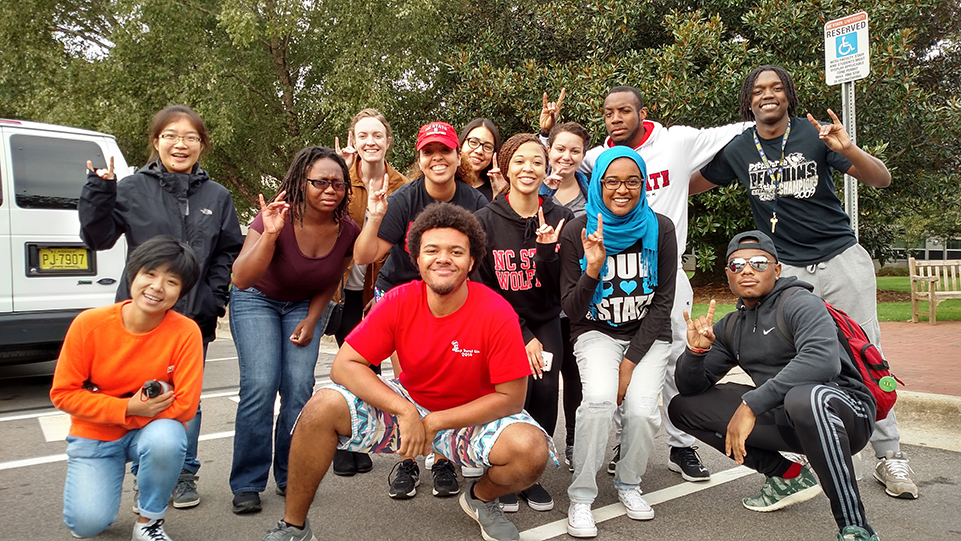 As Hurricane Matthew threatened to bring heavy rains and flooding to North Carolina, a group of students loaded their bags and prepared to immerse themselves in the Alternative Service Break in Greensboro and Atlanta. One of three fall break service trips offered by the Center for Student Leadership, Ethics and Public Service, the Civil Rights and Gender Equity trip is a three-day intensive exploration of social justice topics.

On Day 1, the group arrived at its first stop, the International Civil Rights Museum in Greensboro, North Carolina. The museum is located on the site of the famous Woolworth’s lunch counter, where a non-violent protest held by four students from NC A&T University on February 1, 1960 started a national movement of sit-ins at “whites only” lunch counters. The sit-ins continued and grew, sparking similar protests across the country and becoming an important milestone in the civil rights movement. Exactly fifty years later, the building reopened as a museum. Sections of the lunch counter are on display both here and in the Smithsonian Institution’s National Museum of American History.

Visiting the museum “made me take a step back to appreciate the people before me. We’ve come a long way to see how successful we’ve been, and I don’t think I would have made it if it hadn’t been for the people who came before,” said Zakiya Covington, a second-year student from Waxhaw majoring in science, technology and society with a minor in business. Covington went on to add that visiting the museum was one of the most impactful parts of the trip for her because of the exhibits documenting the tragedies of Emmett Till and others who brutally lost their lives in the fight for civil rights. The group then traveled to Lydia’s House, a converted church in urban Atlanta that provides low-cost hostel-style accommodations specifically for groups interested in community service. Staying at Lydia’s House helped students “get into the mindset of doing service and becoming immersed in the community,” said Amani Manning, a senior in political science with a concentration in public policy. Manning noted that while the trip directly relates to his interests in politics and education, the group also included students from a variety of other disciplines, including sciences, engineering, humanities and social sciences majors.

Advocating for Women and Girls The students participated in a workshop where they learned that priorities specific to Atlanta include providing information and resources for sexual safety to help combat Atlanta’s high HIV/STI rates.

The group dedicated the afternoon to a visit to Girls’ Inc., an organization that creates a positive after-school environment for girls in grades K-8 that presents successful multicultural role models and empowers girls to achieve. The instructors provide real-world training such as communication skills, answer questions, provide coaching and encourage the success of young women who might one day give back to the community. Day 3 saw the group participating in the Festival of Lights, an annual community parade on Atlanta’s historic west side. Begun eight years ago by community activist Mamie Moore, the parade brings together neighborhood residents, local businesses and agencies in a lively celebration that is an affirmation of friendship and unity amidst the sometimes stark and unsettling realities of poverty.

Following the parade, the group visited Atlanta’s Center for Civil and Human Rights, a museum honoring Atlanta’s civil rights history that opened in 2014. Architect and NC State alumnus Philip Freelon designed the center, which tells the story of the American civil rights movement as well as those of contemporary human rights struggles worldwide.

The direct focus of this museum’s exhibits had the greatest impact on the trip for some. Of the single portrait of Malcolm X accompanied by the quote, “The price for freedom is death,” Amani Manning said, “I had to sit down. Mainstream media does not really talk about this. To hear leaders speaking of some of the scary positions that they were in made you appreciate the ultimate sacrifice they made.”

Students could choose to attend either the Lindsey Street First Baptist Church or the historic Ebenezer Church for services on Sunday morning before heading home.

Reflecting on the Why Each evening, student peer leaders provided plenty of time for participants to talk about what they had seen, heard, felt and learned during the day. The periods of reflection gave students time to process some of the difficult subjects their visits touched on. Says Zakiya Covington, “I feel like everyone should experience an ASB trip because it makes you appreciate all the opportunities we have.” She added, “It promotes open-mindedness and action – doing something about it. I feel more willing to speak up and speak out to help.”

Adds Amani Manning, “I was excited to come home. I felt like I had a moment of clarity. The trip motivated me to do all I need to do here at NC State. There is nothing like experiencing real life – not from a book – problems in society. It’s more than you can imagine on your own.”

Jennifer Castillo, associate director of the Women’s Center and an advisor on the trip since 2011 adds, “I love the impact of this powerful transformational learning experience for myriad reasons. Students move from reading about civil rights and gender equity to engaging in the issues with communities that continue to advocate for these same issues today. The demographically diverse students also connect as a community that provides a place for all members to belong and engage in crucial conversations, both on the trip and upon their return.”

Meron Habtemariam, ’17: “The strongest feeling I got from the trip was a sense of activism. I had an urgency of doing something for my community and communities around the country.”

Mitchell Moravec, ’17: “We tackled almost every facet of human rights and questioned our lives and privileges as a result… Ultimately, we all followed our life paths to this intersectional experience from which we must now continue to go our own ways and take on the future of social justice.”

Dajon Lacey, ’18: “This trip was truly one of the greatest experiences I have had in my life… and ­­it left me with a craving for more knowledge on diversity and gender issues.”