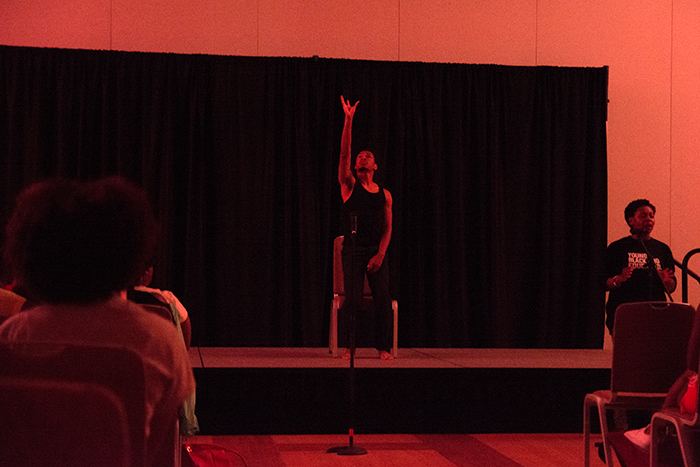 The program began with traditional African drummers from the African Student Union followed by Kinesha Harris and Matthew Wright welcoming guests into the space. Dr. Brookins poured libations, a tribute to ancestors, honoring their lives and their work. Dr. Frances Graham, director of the African American Cultural Center, then presented Assistant Director Dawn Morgan and Librarian Angela Jenkins with hand-carved wooden Sankofa birds from Africa, a traditional gift of the center. Sankofa translates to “It is not taboo to fetch what is at risk of being left behind.” These awards are usually given to members of the NC State community at the Ebony Harlem Awards. They recognize and celebrate those members whose talents and efforts uphold the mission of the AACC. Dawn Morgan and Angela Jenkins were celebrated this year for their commitment and compassion.

A moving “Can You Hear Me?” performance from the Sankofa Theatre followed, including a dance choreographed and performed by John Miller IV. The new student leaders and members of the community were then introduced, and Leah Young, assistant director for African American Student Affairs in Multicultural Student Affairs, presented the Afrikan American Student Advisory Council (AASAC) organizations.

The program closed with a traditional Harambee where everyone stood, held hands and voiced, “Harambee” in unison. Program Coordinator Toni Harris Thorpe remarked, “This year’s Harambee was the best Harambee ever! It was a true representation of the wonderful tapestry that makes a community. Based on love, based on commitment, the acknowledgment of struggle and the determination to persevere.”