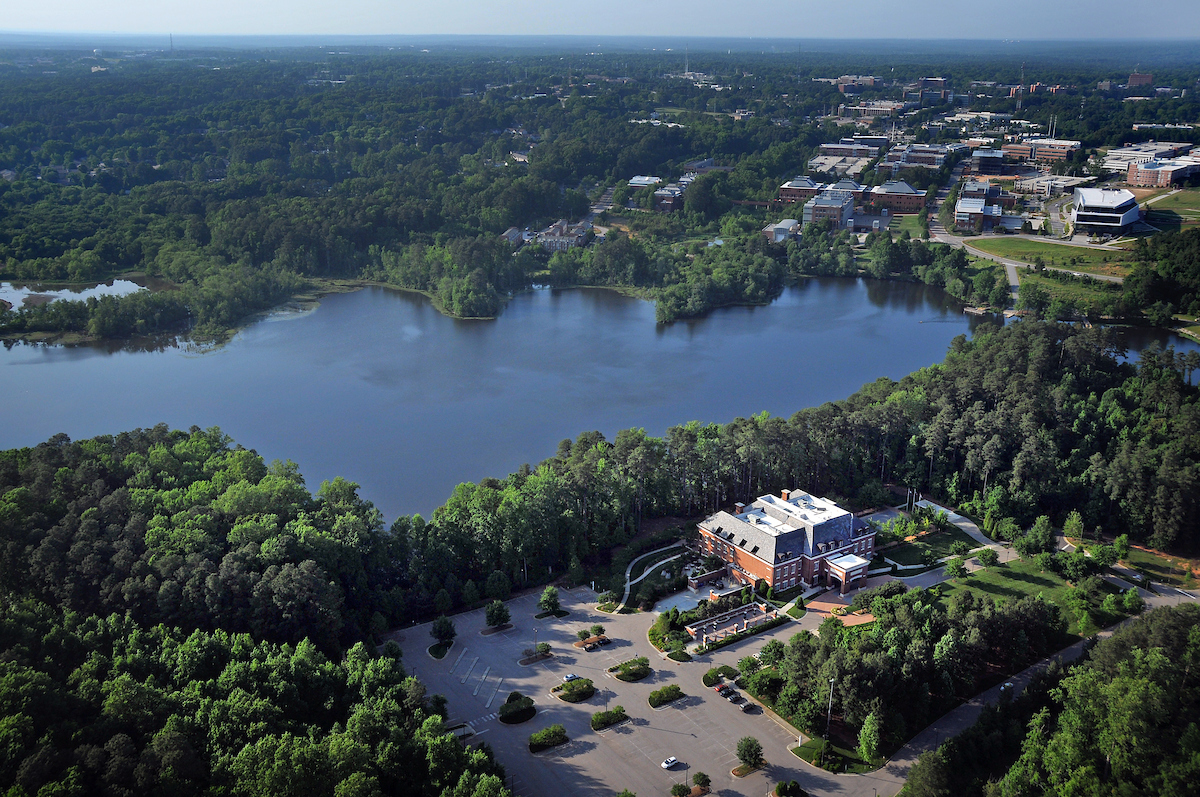 Park Alumni Center, sitting on the banks of Lake Raleigh.

Alternative Service Break Trips vary from regional excursions to intercontinental journeys. One such ‘mega-venture’ is the ASB Guatemala trip that happens during spring break. Three students who were up for this undertaking provided some reflections on their experiences.

Alex is a junior in majoring in Textile Engineering with a minor in Materials Science and Engineering.

“I am a human being; nothing that is human can be alien to me” is a quote by a famous playwright of the Roman Republic, Publius Terentius. I heard this quote in my Race and Interdependence class with Dr. Nacoste, but it did not resonate with me until I was at the dinner table with a host family who had taken me in for a one-night stay during the ASB trip. The language barrier that existed between the family and me prevented us from verbally communicating. Although this language barrier was present, I attempted to observe any differences between the family’s social characteristics and social characteristics of an “average” American family.

I embarked on the trip with preconceived notions of the cultural and social differences I was going to encounter. I believed that Guatemala would be a whole new world, and for me it was vastly different from life here in the States on a broad societal level. However, my experience revealed to me that the people on an individual level are no different than people in America. From my perspective, the Guatemalans were no different than people I have met in various other countries across the world. As I spent the night with my host family, I saw that they laughed the same way people would anywhere else. The kids joked around while playing tag as they would anywhere else. I was privileged enough to witness this “thread of humanity” which connects people from all over the world. There is currently a lot of discussions prevalent in the media about sectionality regarding race, ethnicity, and many other social constructs. All of those sectionality discussions seemed irrelevant when I witnessed firsthand that if one is a human being, in no way can they be alien to me.

Jennifer is a sophomore in Criminology.

Our trip to Guatemala was such an enriching and inspiring experience. I don’t even know where to begin. We met some of the most strong and kind women there who shared their stories of loss, sexual and domestic violence. These women were so quick to welcome us into their hearts and even their homes. All of them had found a way to transform their grief into a brave effort to change their life and the Guatemalan culture. We heard a lot about machismo and these women’s efforts to break that down not only in their sons, but in the greater community as well. They refuse to accept the status quo of catcalls in the streets and general male domination over women. That’s one of the things that will stick with me after the trip: don’t just disagree with things that you believe are wrong; challenge and change them.

Kristie is a graduating senior in Nuclear Engineering

My experience in Guatemala was a once-in-a-lifetime experience. I learned so much about the country of Guatemala and humanity overall. I met the absolute strongest and most inspiring women I’ve ever met. Their faces are engraved in my mind – their smiles, their strength, their wrinkles, and their stories as I heard them. Our experiences were so varied. We met indigenous women who told us stories of loss, disappearance, fleeing, and fear. We watched them stare their pain and histories in the face as they brought their stories to life again for us to hear and learn from – and simply to touch our hearts, because they understood how meaningful their stories could be. We then went on to meet other activists and workers in Guatemala who study and fight for the equality and improvement of both indigenous and Latina women alike in Guatemala. We met women who have taken their own horrific domestic violence stories and thrown them in the face of the public to force change where it must be had. We met women who artfully wove textiles in the same way they allowed us to weave our lives into their home for two days. We witnessed the natural beauty of a people too often forgotten and a country too often taken advantage of.

I also gained friends from my travel group. With them, I shared wonderful experiences unique to only us and our friendships and bonds. With such a diverse group of individuals in our travel bunch, I was enlightened on so many levels. While in Guatemala, I learned an enormous amount about my home in North Carolina and the people in my own country – the United States – because of the discussions, the openness, and the environment created among this group. I always have felt that NC State lacked diversity, and while that doesn’t change my opinion, I know that we are much more than students ignorant of their privileges and blind to others’ plights. I am so grateful to NC State for allowing me the channel in which to flow through others’ experiences and the lens in which to watch those struggles.