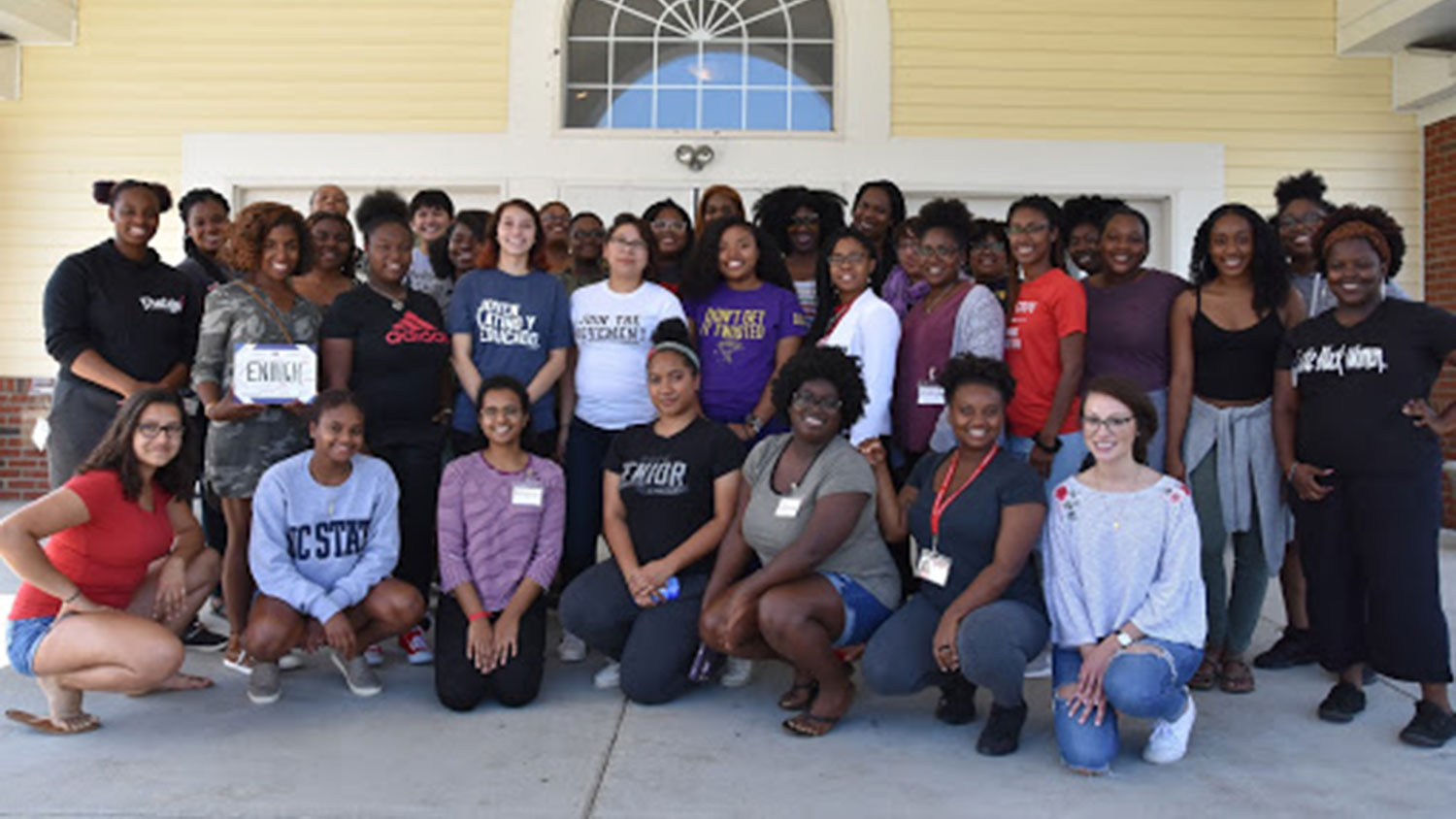 “If you have come here to help me, you are wasting your time, but if you have come because your liberation is bound up with mine, then let us work together.”

This quote, by Indigenous Australian visual artist, activist and academic Lilla Watson, is the core experience of the Womxn of Color Retreat (WOCR), held October 4-6, 2018 at the historic Franklinton Center at Bricks. Situated in Whitakers, NC, the Franklinton Center acknowledges that it is in an area that has one of the highest poverty and illiteracy rates in the country and is the second-largest food desert in the United States. Acknowledging its history of both tragedy and hope, the Franklinton Center pours its resources into caring for its community and expanding its reach. The Franklinton Center’s staff use the center as a place for transformation, hope and continual healing. Starting with its location on land that was once home to the Tuscarora, became a breaking plantation and later transformed into a school, the retreat sought to exemplify how while the horrors of the past affect our futures, we have the ability to transform hurt by dismantling oppressive systems and claiming/creating healing spaces.

With a complete overhaul from the previous year’s retreat, the 2018 Womxn of Color Retreat boasted a robust new 3-day curriculum with the theme of Developing and Embracing a Revolutionary Consciousness: Awareness Building, Reflection and Actualization. Learning outcomes centered on participants’ ability to assess their own agency, discuss and contribute to the production of knowledge, interrogate institutions and transform critical engagement to create change.

Kahlia Phillips, Student Logistics Intern for the retreat stated, “The WOCR was intentionally crafted to completely center the narratives, experiences and voices of the womxn of color on NC State’s campus. We were seen. We were heard. We were validated. We were understood. Thus, this retreat was necessary for the development of our revolutionary self-care and consciousness.” Using womanism as a theoretical construct, the Womxn of Color Retreat creates a community focused on finding meaning, healing, support and trust with the purpose of participants moving towards actualization by creating space for thinking, feeling and evoking change around how they think of themselves as womxn of color within historically white institutions.

The goal of the retreat is to create a just space where womxn of color can express themselves, explore their multiple realities and intersecting identities in addition to discovering and critically examining the intricacies of power, leadership, sisterhood and scholarship. This also means returning to institutional homes with a renewed ability to persevere. This revolutionary process was ingrained at the core of the retreat and one student wrote, “I am so happy I came! I almost gave up and this retreat gave me the courage and motivation to keep fighting!” Of the 32 students who attended the retreat, only three students truly saw themselves as change agents and/or producers of knowledge prior to attending. Many indicated that the retreat was the first place where they felt it possible for them, students of varying academic classifications and degree levels at a research one institution, to be able to produce knowledge and create change in intentional and meaningful ways.

One student who previously believed she/they had no true impact in her/their daily life came to the realization that to be a revolutionary, she/they only needed to use their voice. Further elaborating, “I can now confront outside factors that influence me to disengage from my authentic self and disengage from oppressive systems that I uphold in myself.”

A facilitator reflected, “What we learned at the WOCR is that all we need to be a revolution is to claim our authentic selves in every space we occupy, to remember the lessons recalled through the stories of ancestors then and now, and to hold one another in collective — remembering the existence of one is tied up in the existence of another. The revolution is already within us, we only need to liberate her.”

On average, participants stated they were now “very able” to explain these constructs. Students also reported to what extent they felt they were more equipped as womxn of color at NC State, and on average participants stated they were “very much” equipped. One student commented “I learned about all the resources that I have on campus that I didn’t know were there before. I was really taken away by how powerful the activities we did were and how I can use them for the future.”

Another student takeaway was “WOC are made up of different complexities! We aren’t just one being! To learn from everyone, nothing is by coincidence and that more than anything we need each other.” Another student also noted “What really resonated with me was the moment we began to speak about ways to implement being a revolutionary on the campus of NC State”

Student logistics intern Zakiya Covington said, “The Womxn of Color Retreat was a space where womxn who came from different experiences and backgrounds could come together to relate, release and unmask and unpack. We managed to once again validate ourselves and form a bond that will transcend beyond the retreat.”

The Women’s Center thanks not only the student participants who made this retreat possible, but also our field facilitators who worked tirelessly to create an experience for our NC State womxn of color. Field facilitators included Kory Saunders, NC State Study Abroad; Bri Hart, College of Textiles; Bri Elum, Housing and Residence Life; Nicky Andrews, NCSU Libraries; and María Tudela, NC State alumna.

Additionally, the program would not have been possible without the financial and/or programmatic support from Multicultural Student Affairs and the NC State Counseling Center. If you and/or your department are interested in providing financial support to the Womxn of Color Retreat, please email womens-center@ncsu.edu.

Any self-identified undergraduate or graduate womxn of color, inclusive of cis, trans and gender-queer Latinx and/or Hispanic, Indigenous and/or Native, Black, African, Asian, Pacific Islander, Desi American and those of any multiracial group at NC State can apply for the Womxn of Color Retreat.

Applications for next year’s Womxn of Color Retreat will open in April for both students and field facilitators. If you’re curious about the retreat, stop by the Women’s Center in Talley 5210 with questions. It should be noted the retreat is an investment in you and what you put into it directly corresponds to the retreat’s output. As one student stated, “We pushed the comfort zone envelope, it busted open.”

Angela Gay is assistant director of the Women’s Center.