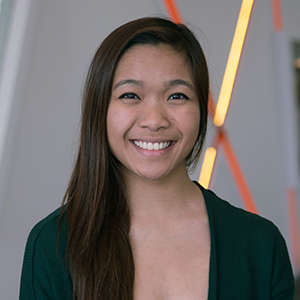 Rachel Banawa is a graduating senior majoring in psychology from Old Bridge, New Jersey. She is president of Asian Students in Alliance (ASIA), a sister of Kappa Phi Lambda Sorority, Inc., and a mental health ambassador in the Counseling Center. She also dances with Fusion Dance Crew. She has also served on the executive boards for the Asian Students Association and the Multicultural Greek Council.

What is the focus of ASIA?

Mainly, we are an umbrella organization that advocates for collaboration among Asian-interest student organizations, provide information about university resources, encourages access to campus diversity initiatives and creates dialogue regarding Asian American and Pacific Islander (AAPI) student needs. We also provide educational programming on multicultural topics as a way to raise cultural awareness and increase cultural competency. For example, last semester for Diversity Education Week we hosted an event about the cultural differences between East/Southeast Asians and South Asians. This semester, for Diversity Education Week Revisited we hosted an event titled “Stories about Courage: Immigrant and Refugee Experiences” to shed insight on the policies, history and realities of immigration within the U.S., as well as refugee stories in other countries. In the past, we have held workshops for students to improve their leadership capabilities.

What kinds of things has ASIA accomplished this year?

ASIA has been successful in increasing institutional support for the AAPI community. We received funding from the university for about a dozen student leaders to attend the East Coast Asian American Student Union Conference 2017. We received assistance from Multicultural Student Affairs (MSA) with planning and implementing AAPI History Month 2017. We helped the Korean Conversation Club obtain guidance from MSA on creating a petition to advocate for bringing Korean language studies to campus. These are all very big milestones for us in terms of being recognized by upper administration within the university, especially since AAPI students were not often served by the university in the past.

This year’s AAPI Month program calendar is fairly extensive. How challenging was it to organize such a large number of events?

The program calendar as a whole was not very challenging to plan. Each event was planned by individual student organizations underneath the ASIA umbrella as well as university departments/offices. When every corner of the community is involved and working together to create something amazing, all of the parts come together naturally and with ease. The program calendar would not have been as successful had it not been for the wonderful participation from so many different organizations, faculty, staff and students. Furthermore, the professional guidance that we received from staff members at MSA helped so much and really meant a lot to the ASIA executive board. We are incredibly appreciative of everything they have done to make the month a success, from managing the planning committee, advertising the call for programs, organizing the calendar, publicizing the events and so forth. I really enjoyed having the opportunity to work closely with them.

What is unique about being Asian at NC State and what challenges, if any do Asian and Asian American students face here?

Being Asian at NC State means existing at an institution in which the majority of people do not look like you, may never have heard of certain aspects of your cultural background, and may not resonate with the traditions of your family’s heritage. The Asian and Asian-American experience for students at NC State varies because there are many different cultures within Asia itself, so I try to refrain from making major generalizations about our community. However, the fight against common struggles definitely brings us closer together with a united front. Sometimes we experience microaggressions such as, “You’re Asian, why are you bad at math?”, “So, you eat rice every single day right?”, “Sorry, I forgot to bring chopsticks for you”, or “English isn’t your first language right?”. Sometimes the model minority myth forces us into a situation where we are misunderstood and not receiving the guidance that we truly need. Sometimes we feel underrepresented due to the minimal amount of faculty and staff on campus who identify as Asian, Asian-American or Pacific Islanders. Sometimes our cultural backgrounds are disrespected because incorrect stereotypes put people under the impression that all Asians are Chinese or Japanese. As a community, we fight against these struggles by being proud and open about our heritages, supporting one another and speaking up. We make it known that we are persevering together.

Do you think a diverse student body is important at NC State?

I definitely think having a diverse student body at NC State is important. Diversity is not defined by merely race or ethnicity; there are also gender identities, political stances, socioeconomic statuses, religious affiliations and different walks of life overall. I believe it is important for people to expand their horizons by exposing themselves to other people who are different from them while maintaining an open mind and willingness to learn. So much of life is missed if you are always sticking to the same things.

What have been some of your most impactful experiences here at NC State?

When I came in the fall of 2013, I wanted to be surrounded by positive people who worked hard, accepted me for who I was and supported my growth. I would say one of the most impactful experiences at NC State was finding that environment by crossing into Kappa Phi Lambda (KPL) my first semester of freshman year. I think it is vital for people to be able to find their sense of belonging on campus in whatever way that might be. KPL has been the root of my passions for leadership development, multiculturalism and advocacy and has connected me with so many faculty, staff, student leaders and other amazing people across the country. On a more personal level, it was also the organization that taught me the most about myself and prepared me to take on other leadership/involvement roles, such as my current work in ASIA. I believe it is always important to remember where you came from as you go on in life.