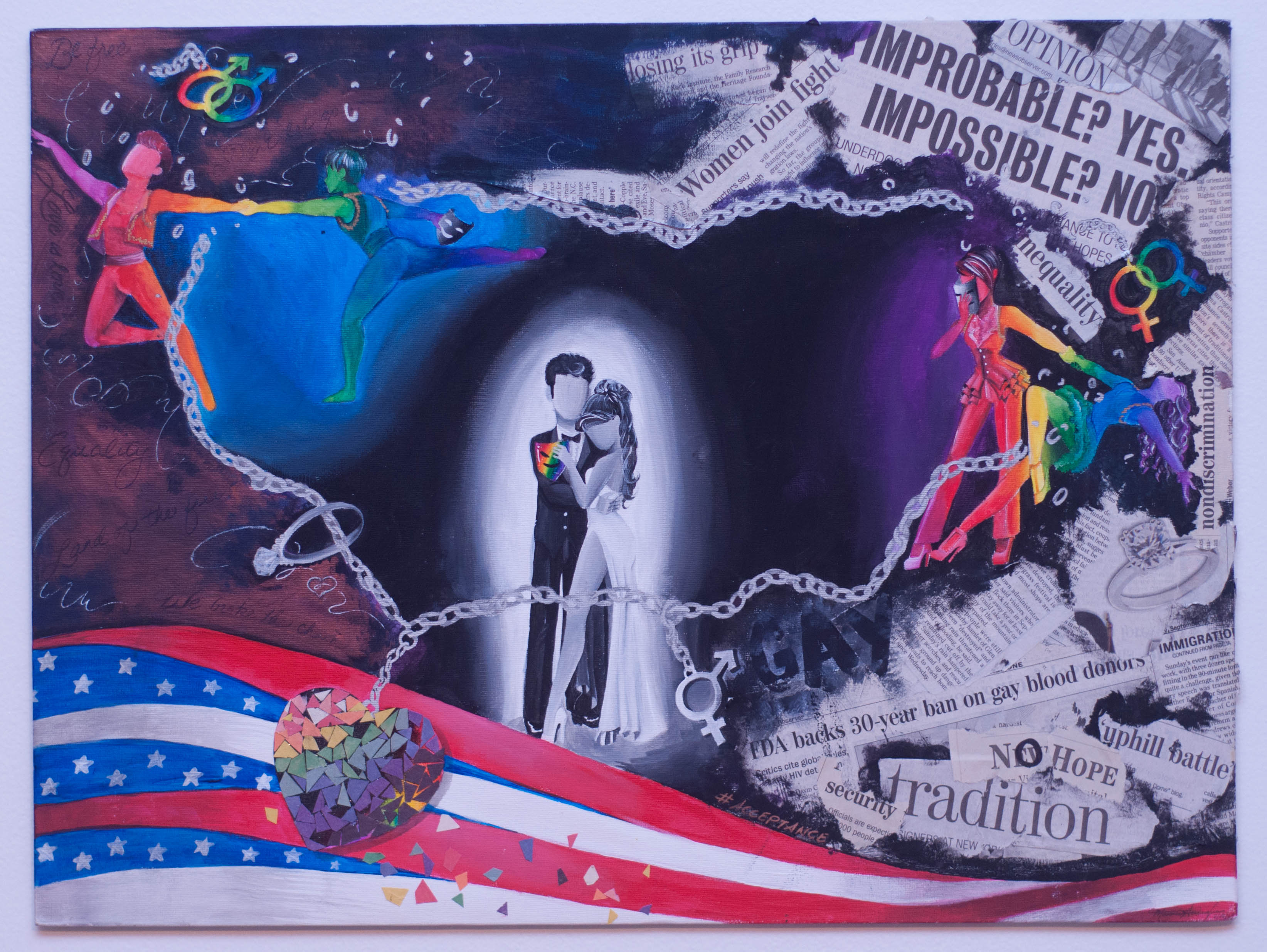 Matthew Wright is a junior majoring in graphic design from Fayetteville, North Carolina. Wright’s work is currently featured in an exhibit in the African American Cultural Center Art Gallery entitled “Red Velvet: Redefining Masculinity, Revitalizing Femininity.” The exhibit display society’s definitions of masculinity and femininity juxtaposed with artwork and pictures of students and people who challenge these very definitions and conformities.

The exhibit is called “Red Velvet: Redefining Masculinity, Revitalizing Femininity;” basically it’s all about accessing and challenging some of the societal standards of what it means to be a man and a woman. It’s addressing gender roles and intersectionality, fluidity – and not necessarily gender fluidity – but fluidity between people and what’s human versus what’s male and female. That was something that I really wanted to capture with this exhibit.

What was your inspiration for “Red Velvet”? I drew a lot from my personal experiences. Growing up, I wasn’t a kid who played sports like all my other cousins did because I was the artsy kid. I was affectionate and I was sensitive to a degree, so I was just different from a lot of other guys. Of course, that raised a lot of stigmas, especially being black on top of all that because there are things that are culturally “normal” for black people and I just didn’t fit the mold. That’s something that has followed me all of my life, and coming to college I really got to know myself better. I got to understand and accept that I am different and that it isn’t a bad thing. With that and whenever it came to my artistic work, I really wanted to showcase the differences that are naturally occurring in any group of people but particularly in African Americans because they are so diverse. African Americans I think are genetically the most diverse people on the planet, so on top of that, there are so many things that we do and so many different images of what black looks like. To capture that and some of the stories of what it means to be a black man or a black woman or a woman in general, or a guy who is interested in this or interested in that, and to cross those lines of what’s society driven – I think that was important for me to do. So that’s where the inspiration came from – how do I show people a glimpse of my own life but also tell them the experiences and stories of others that don’t fit the mold that we are always given.

What are your passions and hobbies?

I’m all about the arts. I love dance, making music, creating visual art and poetry and spoken word. That’s what I’m passionate about. I really want to explore the world of entertainment professionally. Those are the areas where I feel like I can make the most difference, where I can find positive and impactful work while still doing what I want to do.

What is your involvement on NC State’s campus?

I am a graphic design intern at the African American Cultural Center (AACC), an AYA Ambassador of the AACC, choir director of PEACE Church, member of the Panoramic Dance Project and co-choreographer for Fusion Dance Crew.

How do you define diversity?

Why do you think a diverse student body is important at NC State?

First off, to prepare us for the real world, because the real world is full of a lot more than one type of person. And if college is supposed to be a training ground for us to go out into the workforce, have careers and interact with the bigger scope of people in the country, then we have to be accustomed to that or at least exposed to that here. It’s more than academics whenever you go to college, and if the student body doesn’t reflect the environment you’re going to be in after you graduate, then you are going to be ill-prepared. With that, if you don’t come here and you don’t get uncomfortable and have those interactions and experiences where you are challenged because there are people that identify differently than you do, then your mind is going to stay closed. It also means that you’re not going to know how to handle situations whenever you’re approached with them in the real world where there are real consequences for intolerance, where there are real challenges that affect more than just you. So it’s important for every college to have a diverse student body because you get diverse experience. What have been some of your most impactful experiences here at NC State?

The first one, I would say is the Pan Afrikan Pageant my freshman year. Editor’s note: Matthew was crowned king of the Spring 2015 Pan Afrikan Pageant. Not just because I happened to win and be crowned that year, but that was my first time meeting a group of black people that I had not met before and that I had not interacted with. It made me think about the interactions I was gaining and the true meaning of pan-Africanism, about owning my blackness and owning myself as a person and stepping out there and being like “Hey this is me and this is what you’re going to get.” And not doing the pageant to be crowned, but doing the pageant to discover more about myself and to grow as a person. That was a cool experience.

The second one was joining Fusion. Fusion as a whole is one of the most impactful experiences because if you are looking for diversity, you have to go to student organizations. If you join people together on the basis of passion versus demographic, you get a lot more diverse pool of people. I’ve grown with Fusion. Fusion made me appreciate how different, talented and passionate people can be. It really made me more passionate about what I want to do in the future as far as entertainment and the arts go. I think I’ve made some of my best friends in Fusion and they mean the world to me. Now that I’m able to serve on the executive board, it’s just an opportunity to give back and say thank you for the experiences that I’ve gotten from that team. I’ve met so many people from being involved with Fusion. I can’t talk about going to NC State and my college experience without mentioning Fusion.

The third is being at the AACC. Coming here and meeting Mama Thorpe, John Miller IV, Kinesha Harris and everyone who is here, and having this place as a home base has meant a lot more to me than I think I realize. Aside from working here, I’m here a lot. From What’s On the Table, to meetings with Mama Thorpe, to the events that are put on through the AACC, there is just so much that I’ve been a part of or attended or been involved with through the center that if this center wasn’t here, my college experience would’ve been so empty. Of all the time I’ve been here, a good half of it was in this space. It’s a great place for anyone to be.

Would you like to name specific individuals who have mentored you and describe how they have helped you?

Mama Thorpe has been one of the most, if not the most influential person to me since I’ve been here. She is all about helping students grow personally and professionally, but it never feels like it’s forced. And the name “Mama Thorpe” fits because she nurtures students as if they were her own children. Parents always have your best interest at heart, and Mama Thorpe is just one of those people that you need in order to get your bearings here. But in addition to Mama Thorpe, John Miller IV has been a direct mentor to me because he understood, he gets it. He knows what it’s like to be black on campus and he knows what it’s like to be a black man on campus who’s also interested in the arts and in leadership. He was already doing a lot of what I wanted to do when I got here, so he was really instrumental in me finding a niche on campus.

What is your advice to younger students?

If you’re going to come here and you’re really devoted to growing as a person, then you have to get uncomfortable. If you’re not uncomfortable then you’re not going to grow because you’re not going to be challenged. The most growth comes out of challenge, especially when you are outside of your comfort zone, because you have to make a way to come out of the situation. And coming out of a situation that you’ve never been exposed to before really gives you a wealth of knowledge that you can take into the next situation, and the next one.

The next thing is to be unapologetically you. I mentioned before that growing up I was really different from a lot of people – they just didn’t get me and I would wonder, “Is there something wrong with me, because other people don’t get me?” But as I got older, I realized that was really stupid, why is there something wrong with me because other people don’t get it? If you’re going to be yourself, come into your own, learn who you are and take this college period to find yourself – then be yourself. Too many people come into college with a front, trying to be who they are not, to fit in or make friends quickly. I get that. It seems natural. But until you sit down and be honest with yourself: “This isn’t who I am, this isn’t who I want to be, this isn’t what I want to do,” that’s when you get that moment of “this is who I am becoming.” That’s when you start to understand who’s around you because of who you are versus who you try to be. Get uncomfortable and be unapologetically you, that’s how you will get the most out of college and out of life.

Matthew Wright was interviewed by Austin Butler, communications intern in the Office for Institutional Equity and Diversity.